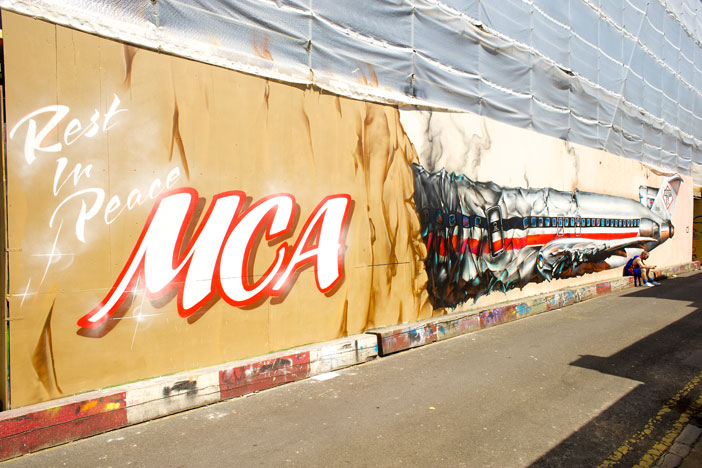 VOLLEY GOOD
If you think the Olympic organisers are complete arses for staging beach volleyball in the centre of that London, why not get down to an actual bona fide beach to have a go for yourself? The Yellowave Beach Sports venue on Madeira Drive is hosting a series of free have-a-go events called Go Spike on Wednesday evenings from June 20th, 6-7pm, and there’s actual sand laid on so you’re not face-planting onto the shingle. Get down there and either perv or participate – beach volleyball is where it’s at for the summer.

SPRAY FOR MCA
Brighton’s increasingly colourful walls didn’t let us down when the Beastie Boys’ MCA sadly died last month. Local graff god Aroe has sprayed up a jaw-dropping tribute in the shape of the crumpled plane from the band’s debut album sleeve, ‘Licensed To Ill’. It’s down the side of the Co-op food place on London Road if you fancy a gawp at his work. In further tribute, Sticky Mike’s host Gratitude, an evening of nothing but Beastie Boys tracks, on Mon 4th, raising funds for Cancer Research UK.

GREEN MODEL ARMY
Miss World might be a prehistoric pageant from the past, but add some eco attraction to the mix and it’s all about the now. Miss Earth is in its 12th year and local hopeful Kirsty Brachman is representing Brighton in the national final in glamorous Weston-super-Mare. It does have a green agenda about it – finalists are all expected to turn lights off and recycle a bunch of stuff as part of their day-to-day lives – so we’re right behind Kirsty in her title bid. Unearth Miss Earth info at missearthgirls.co.uk.

NEW MUSIC? YOU BET
If you’ve ever been to the Rendezvous Casino down the Marina, trying to win some dough for a night out, or maybe just to buy your mum a caravan, you might have noticed there was no live music there. Of course, if you were on a winning streak, you might not. But now there is. This month, their Rivva Room begins hosting Saturday Night Live with new music and bands. It’s free to get in, so it’s worth taking a look at the line-ups at rendezvouscasino.com/brighton.

ROLLED OUT
By the time you read this, the local skating community will be coming to terms with the loss of Roller Central in Shoreham. Going against the advice of its own Planning Officer, Adur District Council has refused a new licence, citing noise complaints from just two nearby houseboat owners. The indoor skating venue was scheduled for closure at the end of May, although there will be an appeal so fingers crossed. Brighton Rockers roller derby team, who were based there, will move their training to Sussex University.

360 DEGREE FEEDBACK
We went on that Brighton Wheel recently – a more underwhelming way to spend eight quid we can’t remember. You’re not even allowed to rock the pods. For those with aspirations to view beyond the roof of Revenge, though, that long-talked-about i360 tower thing in front of the West Pier has finally been given the go-ahead for 2014. At 175 metres high, it should offer a proper view of Brighton and beyond, and provide an unrivalled spit launch platform for bunking-off schoolboys. Whether or not there’s anything worth seeing when you get up there, of course, is a matter for debate.

FREE BEER
If you like to sample Belgian beers without recourse to wallet strain, these free tastings will appeal. A pair of drinks experts and Edinburgh Fringe veterans are touring Brighton boozers with complimentary kegs for you to sample while they crack gags and educate participants in beer-based history and facts. The first one is at the Open House, Springfield Road on Wednesday 13th – find out when and where the rest are by checking our listings section.

BUSINESS BOOMING
With the economy going down quicker than John Travolta’s masseurs (allegedly), it’s good to see new local business start-ups weathering the storm and flourishing. A while back we interviewed Brighton company StartBrandAgency, and we’ve teamed up with them to offer a competition-winning business a year of savvy backing and mentoring worth a cool 10 grand. The final shortlist of 10 has been selected – check out their progress at startbrandagency.co.uk.