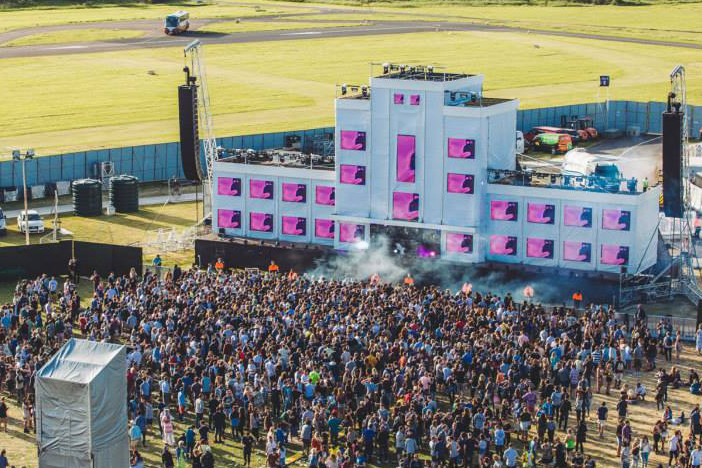 Since its announcement back in January, Wild Life Festival has been somewhat of a whirlwind of marketing, PR and organisation, with co-organisers Rudimental and Disclosure tasked to get things done in around four months – no mean feat by any standards. The festival, a two-day event without camping, was the largest of its kind ever held in Sussex and presented an opportunity for the county to make a name for itself in the already competitive UK festival scene.

As with any new festival there were certainly a few teething problems, with rumblings on social media picking up speed throughout the early part of Saturday. These were mostly regarding the transport: we heard stories of 3 hour queues, fights breaking out Titanic-style when festival-goers were eventually allowed to board and buses heading to the festival with empty seats, leaving many dishevelled and battle-weary folks behind. The taxis out of the festival fared largely the same, many taking as long as an hour to reach their bookings due to the heavy traffic congestion around the site – not an ideal situation when your time at the festival is limited to afternoon onwards, less so for those who only held a day pass.

Once inside the festival, though, the hubbub of the transport issues seemed to be forgotten in a mess of glitter, body paint, animal heads, and throbbing beats coming, most noticeably, from the Warehouse Project Presents stage. The imposing white structure, clad with large screens and projected visuals, was placed directly in the centre of the festival and acted as its beating electronic heart, pumping out loud techno and house from beginning to end each day, with notable acts such as Skream, Maya Jane Coles b2b Heidi, and a vibrant set from Joy Orbison and George Fitzgerald to see in the sunset on Saturday. The stage really shone on Sunday, however, with Jonas Rathsman playing a bass-heavy techno set early in the day, through to energetic sets from Jackmaster b2b Seth Troxler and Eats Everything.

The main stage catered towards more mainstream tastes, with acts such as George Ezra, Soul II Soul, and headline sets from co-organisers Rudimental on Saturday and Disclosure on Sunday. Once again, Sunday provided a notably more impressive line-up, evident from a seemingly larger crowd in attendance. Old school hip-hop legends Wu-Tang Clan delivered a satisfyingly feisty performance, prompting a sea of ‘W’ hand signs to rise up in unison, while the UK grime scene was well represented by JME and Skepta – during which an impromptu visit from Wiley for ‘On a Level’ sent the crowd into frenzy.

Wild Life’s other two stages, the Big Top and the Black Butter and Friends – Treatment Vs Bedlam on Sunday – held strong throughout the festival too with Saturday bringing us Earl Sweatshirt and an incredibly fun garage set from Wookie and DJ Q, and Sunday bringing some great sets from artists such as Novelist (complete with the happiest DJ known to man), Jamie xx and B.Traits.

For a first attempt, Wild Life Festival certainly got a lot of things right. The stages were well-stocked with notable artists, and the general atmosphere was jovial, despite reports of ejections hitting the media on Saturday. Certainly, it has built itself a strong foundation for the future, but issues such as transportation and heavy toilet queues inside the festival definitely need to be ironed out. With some tweaked organisation, slightly cheaper bars (£4.80 for a small bottle of beer at a festival where no one can bring their own is downright cheeky) and maybe the introduction of camping, Wild Life could see itself becoming a staple of the UK festival scene.

Sometimes an article is a bit of a team effort, and those are tagged SOURCE Writers. If you’d like to be part of that team, hit the Contact link at the top and get your work on this website.
← PREVIOUS POST
Octopuses, Wed 10th June
NEXT POST →
Tinariwen Review
Mailing List
Recent Posts
Website developed in Brighton by Infobo
Copyright © Brighton Source 2009-2021
Wild Life Festival Review - Brighton Source