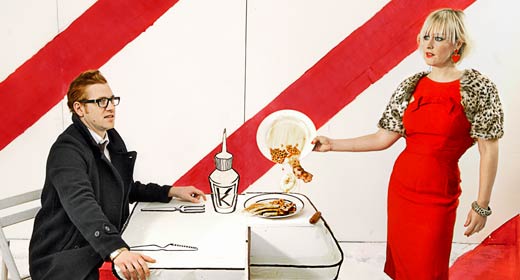 Getting Alice Russell and Alex ‘TM Juke’ Cowen to stay emotionless for any length of time – even for the 100th of a second it takes to snap a photograph – isn’t easy.

They’re always messing around, teasing each other and relentlessly taking the piss. In the best way possible they’re like a kid brother and sister. How they get anything done when there are no adults around is a mystery. But getting stuff done is in their blood. Getting stuff done happens.

The brash blonde has just completed her second album with the redheaded production dynamo (to add to her two excellent compilations), while Alex’s LP involvement amounts to four album projects this year alone. Both are at the top of their games – Pot Of Gold shows why Ms Russell’s soul blues voice is considered by many to be the best in Britain, while Alex’s production embraces more live instrumentation for his authentic but modern funk. The world loves Alex and Alice. But for all the teasing, do they love each other?

“He’s pink,” blurts out Alice when asked to describe Alex. “He’s funny. He’s pretty hard working and gets on with stuff. He’s got a quick sense of humour. Action instead of faffing about.”
“You missed out charming,” prods Alex.

Well, he got there in the end, and he nailed it too. Alice is natural, both in the way she sings and the way she is. And the pair’s relationship is completely natural too. Five years after Alice popped up on Al’s Maps Of The Universe, the pair have spend the last three years working together frequently, both writing and in the studio.

“We tend to write pretty well together,” Alice ponders. “I used to think it was quite a separate thing, but with Al we work pretty quickly, pretty freely, together.”

So what’s it like when you’re in the studio together?

“Fucking dynamite!” says Alice with another exclamation mark hanging in the air.

“It’s like cold, heartless dynamite!” adds Alex. “Sometimes we’re really on it, but the thing is we both talk all the time. Sometimes Alice will be really on one and I’ll be really chatty. We probably spend a lot of time talking a lot of rubbish before we get down to it.”

“And then there’s other times when one of us might come up with a whole sentence and the other one will flip one word and, that’s it.”

Alex says that they second-guess each other a lot of the time and Alice stresses that there’s no worrying about being an idiot in front of each other. They try everything.

What they tried for Pot Of Gold was to get the whole recording process as live as possible (“Alice reacts well to it,” explains Al. “She gives it more.”). So after two days of practice the whole band crammed into a room and spent a couple more days laying down the tracks. Then Alice gave herself three takes of each vocal to get it right.

“It made it more of a performance,” says Alice. “Sometimes with recording if you go on and on with it you lose what you’re trying to do.”

“We weren’t trying to polish it too much,” Al says.

It’s surprising that Alex has time to polish anything with the four albums he’s put to bed this year. In addition to the Alice LP, he’s made one with Tru Thoughts boss Rob Luis (as Me&You), another with The Jack Baker Trio, and one forthcoming with Naim under the name Nekklace. He’s the hardest-working man in Brighton showbusiness. Most artists manage to put twelve tracks on a CD every three years.

“What I’ve learned in the last few years is to not be over precious about things and just get on with it,” he says. “Each thing I do raises the bar for myself tenfold. You learn so much when you have to finish something. It kicks me in the arse to make sure I get on with different things.”
Does Alice like his extra curricular activities?

“All of it actually makes me feel sick,” she jokes. “I’m very jealous. My favourite song he hasn’t made with me isn’t actually out yet. It’s one of the Nekklace tracks – it’s really catchy.”

What’s your favourite thing of Alice’s you haven’t worked on?

“Yeah, some of them have been really good,” Al nods. “One of the Quantic Soul Orchestra tracks where you’re really going for it. Pushing On – hearing that screamdown.”

So, we present the mutual appreciation society that is TM Duke and Alice Russell – a great idea on paper and a reality that cuts like a knife.

James Kendall was the co-owner and editor of SOURCE. He’s been a music journalist since 1992 and spent over a decade travelling the globe covering dance music for DJmag. He’s interviewed a range of subjects from Bat For Lashes, Foals and James ‘LCD Soundsystem’ Murphy to Katie Price and the Sugababes. He’s a keen photographer and has work featured in The Guardian.
← PREVIOUS POST
Critic: Demo Reviews December 2008
NEXT POST →
Consume: Traid
Mailing List
Recent Posts
Website developed in Brighton by Infobo
Copyright © Brighton Source 2009-2021
Alice Russell & TM Juke - Brighton Source