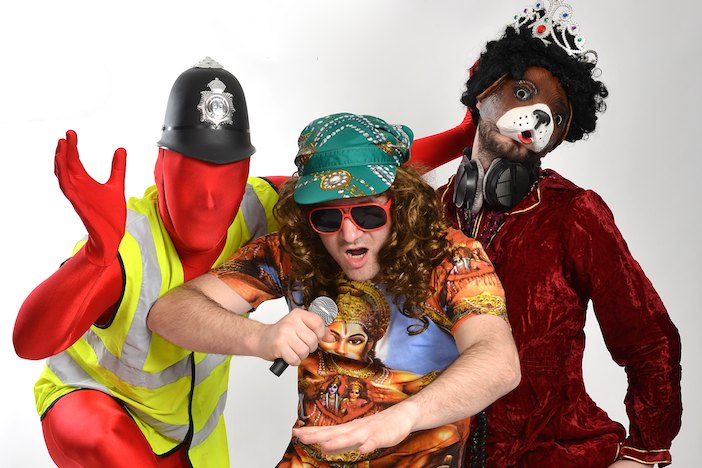 Have you not gone mad yet? Those cut-ups must send you crazy.
You should come to our gigs this weekend and check out what we’re wearing before you judge whether or not we’ve gone mad.

What’s your favourite cut-up you’ve done so far?
The Bloody Apprentice is hard to beat I guess, but it’s difficult not to be fond of the runt of the litter. Cassetteboy In 2011 never got much attention, despite the fact that it’s got Downton Abbey, Embarrassing Bodies and more Alan Sugar in it. So go watch that one, if you haven’t before.

Are they harder than the audio ones you used to do?
Much harder. Now a punchline only really works if you can see the person saying it, so that rules out a lot of good stuff. And when we worked with audio, we made words (swearwords usually) syllable by syllable, but it’s hard to do that without the video looking too glitchy. There are opportunities with video though, you can get a laugh with a good reaction shot, which obviously you can’t with just audio.

Who’s next on your hit list? There’s a lot of people too big for their boots right now.
I think as we move towards the election next year, we’re going to get more political again, so expect more news and party conference cut ups. We also just downloaded a Gregg Wallace show about supermarkets, so we’re going to have a look at that later.

What the live show all about? Guitar solos? X-Factor talent show? EDM bangers?
It’s a comedy disco. We play the sort of poppy, party tunes you hear at a wedding disco, and mash them up with Alan Sugar and Dot from EastEnders. We do funny new videos to go with the songs – we filmed our own version of the Blurred Lines video which is even more upsetting than the original. Oh, and a lot of stupid costumes and a few celebrity guests. And we’ve got our old friend DJ Rubbish onstage with us, giving out sweets to anyone who does silly dancing. It’s like a children’s birthday party for pissed up adults.

You’ve played at Glastonbury and all over – what’s misadventures have happened onstage?
We always wear masks which limit how much we can see. Often we can’t see the edge of the stage, so I’ve fallen off quite a few. In Bristol we knocked over a bottle of vodka as soon as we came onstage, and spent the next half hour slipping over in puddles of Smirnoff. Who am I kidding, we’re not that classy, it was probably Chekhov or Red Square. We used to do custard pie fights, and once an audience member hit us both full in the face with pies, filling the eyeholes in our masks with shaving foam, blinding us completely. One of our best gigs ever gigs was at The Freebutt in Brighton. We gave out toy guns to the crowd – people were shooting them and waving them in the air, it was like a revolutionary rally.

The last time we saw you DJ you played ‘Girls Just Want To Have Fun’ twice in a row for the hell of it. How many times can we expect it this time?
Ha, you probably remember that night more clearly than we do… It’s not in the set at the moment, but I expect we can fit it in four or five times just for you.

After the shows what do you have planned next?
After the comedy discos we always have lots of packets of Bacon Fries left over. You might be able to work out why if you come to the show. So immediately after the gigs we’ll be eating those. We’ve got Glastonbury in June, and after that god only knows.

Cassetteboy and DJ Rubbish are playing at The Spiegeltent on Saturday 24th and Sunday 25th. Click here to buy tickets or here for more info.

Sometimes an article is a bit of a team effort, and those are tagged SOURCE Writers. If you’d like to be part of that team, hit the Contact link at the top and get your work on this website.
← PREVIOUS POST
Die Roten Punkte Interview
NEXT POST →
Poets-Slash-MCs Festival Showdown Review
Mailing List
Recent Posts
Website developed in Brighton by Infobo
Copyright © Brighton Source 2009-2020
Cassetteboy Interview - Brighton Source