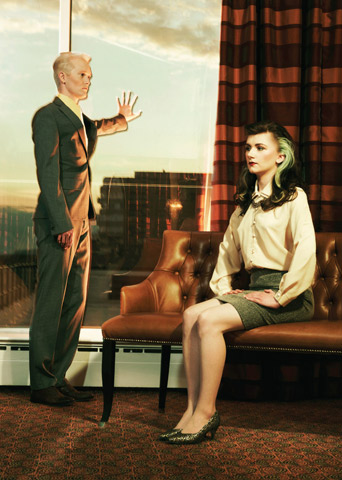 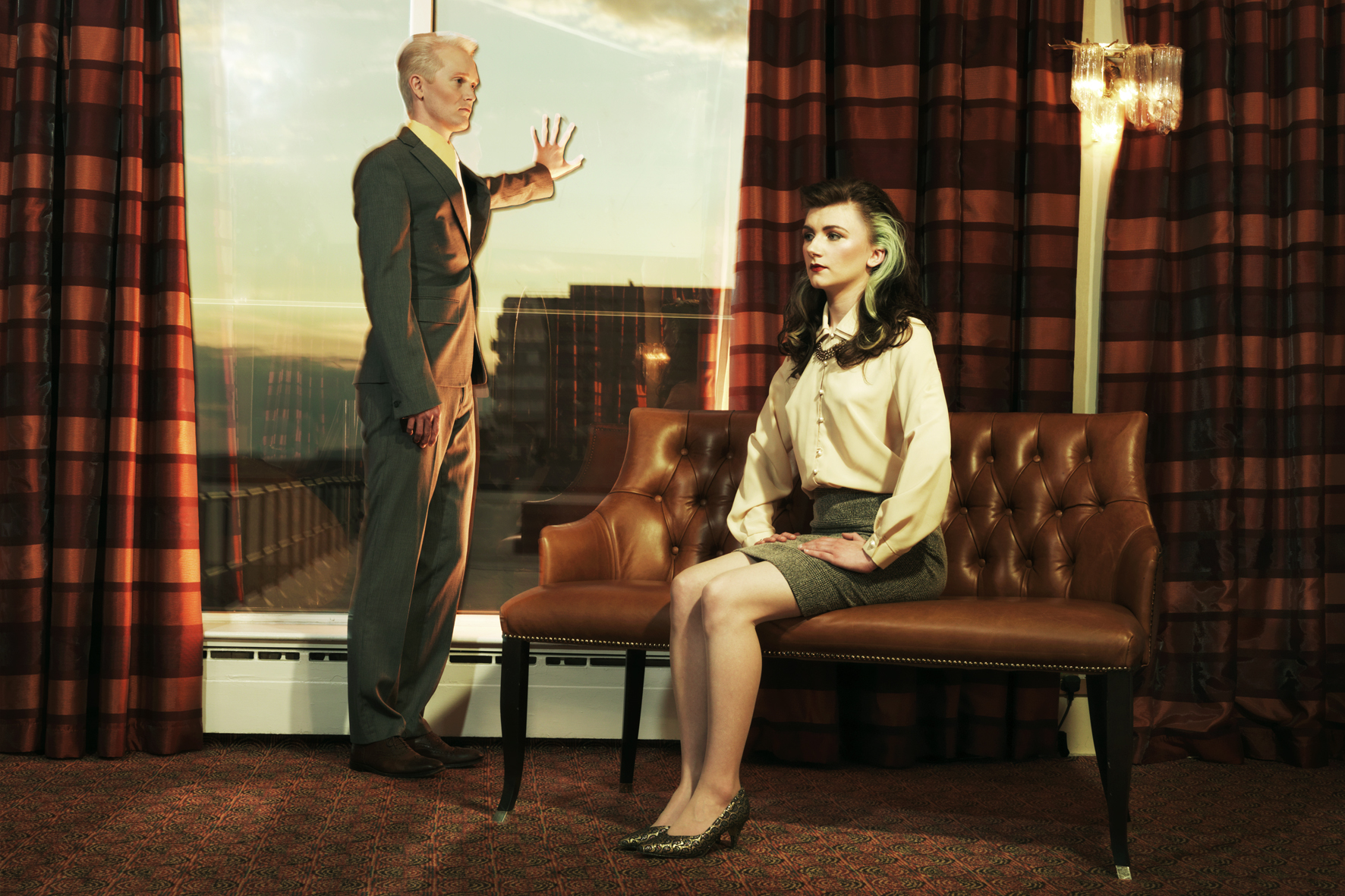 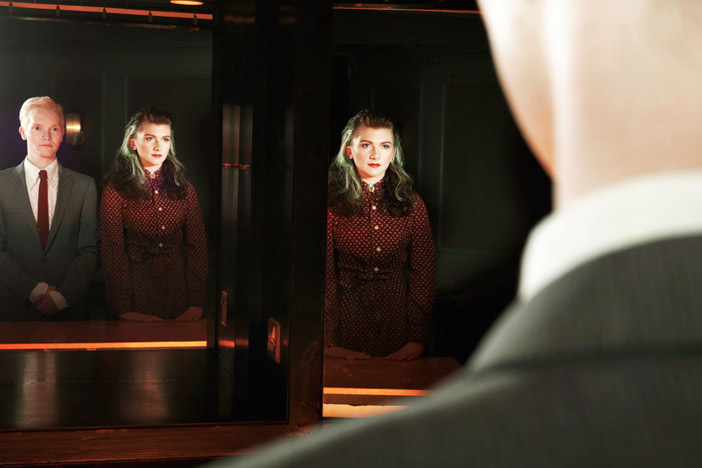 Sure, it’s all about the music but a great band should look good – just ask The Rolling Stones, The Strokes or The Ramones. Hell, even Daft Punk learned pretty quickly to don sequined suits and hide their boring faces in shiny robot helmets. Pop music is a visual medium as well as a collection of sounds. The Libertines went a long way on one good song and some nice military jackets after all. Luckily for Curxes, they’re the whole package – as interesting to the eyes as they are to the ears, as The Great Escape discovered last month.

Even lacking Roberta’s DIY visual projections, their set at The Mesmerist was, well, mesmerising. Macaulay, in suave polka dot shirt, threw his mop of platinum blonde hair about with the same vigour as he did his bass. Roberta meanwhile sang with great intensity as she climbed onto the nearby seating – behaviour rather at odds with her sophisticated little black dress and seamed stockings.

“If I see a band I want them to be interesting to look at, something that draws me in,” says Macaulay, who is much more jolly than his SOURCE shoot Bladerunner-esque persona might suggest.
“I think it helps with the interpretation of the music to have something going on visually,” adds Roberta. “We’ve only recently hit upon a sound we’re really comfortable with. And we’re very confident in conveying that live now. We really get into the performances a lot more.”

A great sound it is too. Last year’s ‘Spectre’ combines sparse synth pop and Siouxsie & The Banshees-style goth to create an industrial grind. ‘Haunted Gold’ meanwhile has even more punch, all synthetic snares and screamed vocals. Anyone who thought this was a car that only ran with one foot jammed on the accelerator will be delighted with the change of gear for new single ‘Further Still’. It has the melodrama of Twin Peaks turned into a spooky lullaby. Curxes call their music blitz-pop.
“The name was a joke that’s gone too far,” smiles Roberta, who has been described as the bastard child of Edith Piaf and Robert Smith.
“People seem to like it,” says Macaulay. “I like it.”

It’s a sound that comes from a love of 80s bands like Depeche Mode, filtered through a modern ear.
“I’ve got an obsession with Sleigh Bells and wanted to distort everything, including the drums,” smiles Macaulay.

The two teamed up when Roberta’s band, Hold Fast, asked Macaulay to play with them at a White Lies support slot. He enjoyed it so much he joined the group, but when the two got more into the electronic side of things they were met with indifference from their bandmates.

“We talked about doing a side project,” remembers Roberta. “We had a few practices and no one else was really into doing the whole electronic thing – they wanted us to go more down the prog route, while I had Rick Wakeman nightmares.”
“Funnily enough we’ve kind of gone back to halfway between the two,” says Macaulay, “Half the post punk band and half the electronic band. We’ve taken the bits we like the best of both and glued them together.”
“We’ve used the DIY ethos but tidied up the sonic and aesthetic elements,” explains Roberta.

Since then it’s all been going rather well, peaking – so far – with a recent remix request from the similarly badly-spelled electro poppers Chvrches. Curxes ‘1996 Remix’ of ‘Recover’ is absolutely brutal, a synth-stabbing assault on the senses that’s a 4/4 kick away from destroying the toughest techno clubs. Chvrches liked it enough to put it on their EP, a vinyl version of which came out for Record Store Day.

Aside from a love of synths and the misuse of consonants (Curxes is pronounced ‘curses’, in case you hadn’t guessed), the two are unlikely BFFs. However they do share a mutual love affair with bloggers – the two bands both gaining lots of online praise and appearing in the Blog Sound Of 2013 list alongside Savages and Haim.

“I have heard our Chvrches version is a Marmite remix,” says Macaulay. “Some people love it and others absolutely despise it. But as long as it gets some kind of reaction that’s OK.”
“We’d rather be Marmite than peanut butter and just beige,” says Roberta.
“My dad hates our music, so maybe that’s a good start,” smiles Macauley.

Their dads might not be in the audience, but the next plan is a UK tour towards the end of the summer, and a possible vinyl single on a label set up by a hip band who are Curxes fans. ‘Valkyrie’ is an intense, stomping, Winston Churchill-sampling industrial pop song with a squalling trumpet that’s on a mission to knock you out cold. One way or another they’re primed to step up to the next level.
“I think up until this point we haven’t been ready, material wise, if I’m honest,” admits Macaulay.
There’s no doubt that they’re ready now.

James Kendall was the co-owner and editor of SOURCE. He’s been a music journalist since 1992 and spent over a decade travelling the globe covering dance music for DJmag. He’s interviewed a range of subjects from Bat For Lashes, Foals and James ‘LCD Soundsystem’ Murphy to Katie Price and the Sugababes. He’s a keen photographer and has work featured in The Guardian.
← PREVIOUS POST
TwoThreeFour Festival Preview
NEXT POST →
Six Of The Best Brighton Boutiques
Mailing List
Recent Posts
Website developed in Brighton by Infobo
Copyright © Brighton Source 2009-2021
Curxes Interview - Brighton Source