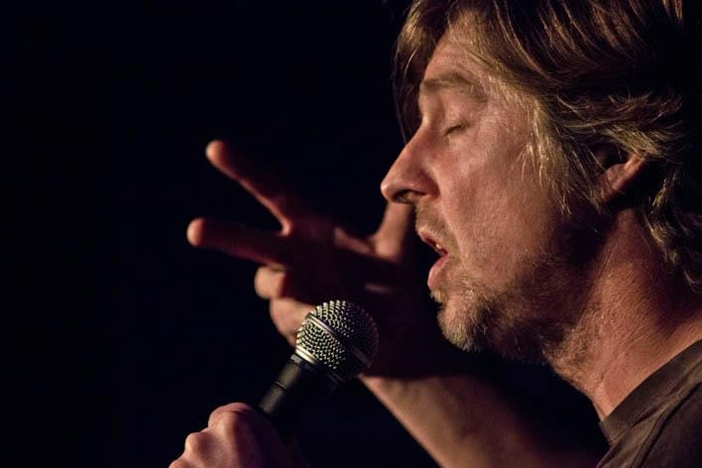 Mike Parker is a big man with a big voice and even bigger ideas. As well as being a wordsmith, musician and mentor, he’s also head of team poetry in this year’s bout of the infamous Poets Vs MCs spoken word battle, back this week for the twelfth year running.

What is Poets Vs MCs?
It’s the biggest, greatest, most energised spoken word night that I know. It started in the Full Moon pub on Boyces Street in 2003 where I was performing poetry at a cabaret gig run by local word guru Paul Stones. It was a place where poets, musicians, comedians could come down and share their stuff. A couple of rappers, Tom Hines and Brainiac, basically came over and said their mates were better than ours. We responded by setting up the first Poets v MCs battle.

How did it go down?
The pub filled to bursting. I remember people on their friends’ shoulders looking in through the windows. Much to the surprise of the rappers, the poets smashed it. We invited them back the following year to try again. But a couple of the poets had got a bit cocky and thought that they could diss like a rapper. The MCs laughed and tore us apart. Since then it’s gone one way or another and moved to bigger and bigger venues and now it fills the Concorde2 with an eager, excited and expectant audience. Seven hundred people at a spoken word gig. That’s special.

Why do so many people keep coming back for more?
There’s so much energy in the show, a fierce rivalry and the most skilled spoken word performers in town. We start the show by showing off our best new stuff, have a half-time feast of freestyling with beats and then, when the frisson has built up until we’re ready to burst, the prize-fight begins. In the red corner, the fast minds and quick wit of the top MCs from the Slip Jam and Spoken Herd crews; in the blue corner, the subtle teasing of Brighton’s greatest performance poets, all winners of slams like Hammer and Tongue. It’s drama, spontaneous drama, and people really care whether their heroes or villains are going to win. Plus it’s dead cheap!

How has the relationship between the teams changed over the years?
Well, first, we’ve smashed the stereotypes of rap and poetry. There’s no use the rappers trying to label us as flower-sniffing softies and none of Brighton’s MCs are remotely interested in guns and bling. We’ve made each other raise our games. Stereotyped attacks don’t hit anymore and are usually met with groans. Misogyny and homophobia were booed off stage years ago, never to return, and there is a great atmosphere of respect between us. But that doesn’t stop us looking for more and more sophisticated ways to destroy the opposition. If anything, it makes us meaner. The rappers got fed up of a losing streak last year and took beating us more seriously. They just about took it, but we’ll be back this year.

Do you think the annual battle has affected what people do the rest of the year?
Many of us are influenced by each other’s stuff. Some have tried parodies of each other’s styles and the parodies have turned into skills. I’ve even tried freestyling, albeit with my slower kind of funk. Some of the performers could be on either side and there was even a defection last year. We’ve made each other into sharp masters of our art and in both communities there is an excitement as we approach the gig to see just how good we’ve become.

You also run a youth version of the event for Brighton Festival. How do you get teenagers excited about poetry?
When we take BITE: The Brighton and Hove Youth Poets v MCs project into schools, young writers and performers, and young people who didn’t know they could be writers and performers, are coached by one of the poets and one of the MCs from our battle teams, sharing the skills that are common to our forms and those that are unique. I have to admit that we usually find the expectancy skewed towards the rappers. This often comes down to how each form has been presented previously: rap being part of an exciting hip hop culture made by peers and heroes, and poetry having been something to study and dissect, to work out the academically defined ‘meaning’ of blah blah blah. It’s no surprise really. Hip hop culture is so alive and vibrant. I’ve seen ciphers taking place in the playgrounds and I’ve battled with very skilled young rappers. The surprise comes when we perform and show performance poetry to be just as energetic, expressive and exciting.

Tell us a little about the mentoring you do. Does it make use of poetry?
A few years ago I joined abandofbrothers, a circle of men mentoring young men, particularly young men in difficult situations in their lives. To help every young man become the man he wants to be, we run a quest project that challenges every man to get in touch with his emotions, his power, his ability to transform his own life and the unique gifts he has to share with the world. This can be very challenging but a supportive, respectful community creates a safe space where a man can face his truth and speak it. The very name abandofbrothers comes from one of Shakespeare’s greatest kingly monologues. Inspired by our circle and the growing band of brothers and sisters pioneering new ways of living, I’ve written a piece that I’ve shared around the campfire recently and I’ll be performing at Poets v MCs on Thursday.

When did you start doing poetry in Brighton?
Blimey! I’ve been here pretty much since I was a hippy bum coming back from India twenty years ago. I spent years mostly dancing, sleeping and performing wherever I could. I had a blues band, then a rock band, then an electro band, then a funk band, then a folk band, and then I found myself without a band but with still a lot to say. So I took my lyrics down to an open poetry night and began speaking there. I once walked into a poetry slam dressed as a vicar, after performing an exorcism for a film, obviously, and was given the name The Reverend. That became my moniker for a while and I became part of a crew playing with different ways of performing. That scene spawned all sorts of different kinds of poets and performers and bands like innovative Lewes band The Indelicates.

Has much changed since then?
Brighton still has an open mic night on every corner and many specific nights for different styles of performance and different ideals of art and that is brilliant for creativity. I just hope that those who want to buy into Brighton’s creative reputation, rather than actually take part in it, don’t price the artists out of town. When I first came to Brighton the best stuff was coming from clever people living in squats.

Any other events on the horizon?
Hammer and Tongue, Slip Jam and Spoken Herd all run monthly events. BITE will be coming to schools and youth clubs from March, and this year we’ve got a further event in the Fringe Festival in May: London v Brighton Poets v MCs. Half the show will be poets from the two cities taking on all the rappers. The other half of the show will be poets and rappers joining forces for the pride of their hometowns.

The rappers won last year’s battle with some surprise guests. Are the poets hatching a plan to retake the title?
Of course! But as always our tactics are more subtle. No need for gimmicks.

Ben Bailey is the editor of Brighton Source and a freelance writer. He also plays in a few bands and can sometimes be found giving talks on a variety of niche topics. He lives in Brighton and rather likes it.
← PREVIOUS POST
A New Hope
NEXT POST →
Writers' Chart 2014
Mailing List
Recent Posts
Website developed in Brighton by Infobo
Copyright © Brighton Source 2009-2021
Unsung Hero No.49 - Brighton Source