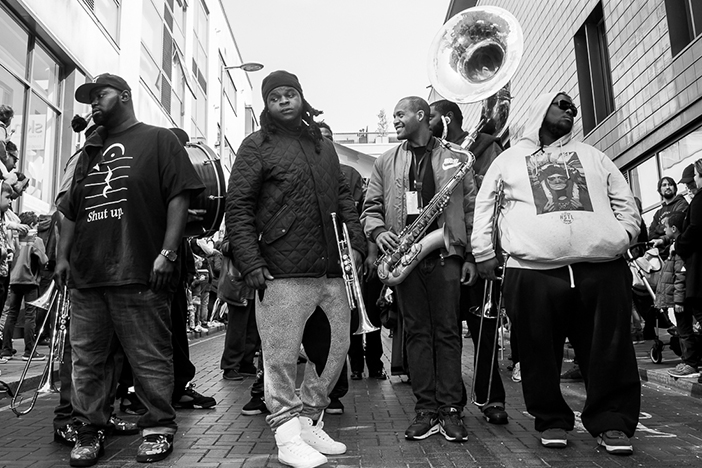 Six Of The Best: Tru Thoughts

Having emerged out of the club scene of the late 90s, Brighton record label Tru Thoughts has become something of a local success story, and is responsible for putting out some of the best music made in the city. This month the label is celebrating its 18th birthday with a huge show at the Dome featuring some of its best known signings including Hot 8 Brass Band, Alice Russell and Quantic.

In a recent interview with SOURCE, the label’s co-founder Paul Jonas was asked to name his favourite Tru Thoughts release. He understandably sidestepped the question, claiming there were too many to choose from, so we decided to answer it ourselves. Here are our favourite tracks recorded by Tru Thoughts artists, starting with a song from the label’s debut artist album, right through to a recent track from a new signing.

We’ve also put together a playlist with Tru Thoughts featuring our favourites alongside six complementary tracks suggested by the label.

Bonobo – ‘Sleepy Seven’ (2000)
“Have you heard Simon’s album yet?” asked our friend James. “It’s got two or three of your favourite tracks of the year on it.” And he was right. Our quiet Brighton mate’s ‘Animal Magic’ added layers of melody and quirky noises to the largely dull genre we were calling chillout then. The LP’s ‘Sleepy Seven’ is a melancholic nocturnal groove that balanced Bonobo’s playing with samples found through charity shop crate digging. Seventeen years – and a top five album – later, it still sounds melodically like him, but the beats are from another era. The former Brighton local and dance music mastermind plays a very special one-off show at the Brighton Centre next month. (JK)

Hot 8 Brass Band – ‘Sexual Healing’ (2007)
To find their first American signing, Tru Thoughts journeyed metaphorically up the Mississippi to the heart of jazz to discover the unbeatable Hot 8 Brass Band. Though the waters of New Orleans flow through Hot 8’s veins, it was at a club in New York, where Quantic DJ’d their version of Marvin Gaye’s ‘Sexual Healing’, that the label’s ears were first alerted. Taken from their 2005 album debut, Hot 8’s vibrant cover became part of the healing process following Hurricane Katrina’s devastation of New Orleans that year, helping to bring the band an international audience receptive to their deep-rooted love of their city’s musical traditions. (SH)

Quantic feat. Alice Russell – ‘You Will Return’ (2014)
Frequent Tru Thoughts collaborators Quantic and soul-singer Alice Russell have produced a number of lovely tracks over the years. The pair joined forces again for the song ‘You Will Return’ from Will Holland’s latest album as Quantic, ‘Magnetica’. The sound of seagulls in the intro instantly transports you to the seaside and, in particular Brighton, where Holland and Russell both cut their musical teeth. The twinkly banjo hook runs throughout, while the soothing violin melody complements Russell’s easy, breezy vocals. A sense of nostalgia is ushered in as the song builds up to the chorus “You will return, you will return, and what is gone will be again”. An ethereal sound, it somehow evokes uplifting and melancholy thoughts simultaneously. (EB)

J-Felix feat. Abi Flynn – ‘Patience’ (2015)
The second track on J-Felix’s 2015 album ‘101 Reasons’ is the slinky, sultry ‘Patience’. Throughout this debut release on Tru Thoughts, J-Felix references 80s funk and soul in all its finery, layering good-natured sunny wooziness with skillfully chopped-up samples. Nestled between the raunchy synths and dusty hip-hop breaks is the second track, the slow-burning ‘Patience’, featuring local vocalist Abi Flynn. Evoking smoky jazz bars and laid-back barefoot glamour, this track is a calmer departure for J-Felix, with a simple, elegant horn section complementing the Rhodes piano. Passionate and full of warmth, ‘Patience’ is a masterpiece in soulful nostalgia. (JMM)

Flowdan – ‘No Way Out’ (2016)
One of the deepest, most distinctive voices in grime, Flowdan delivered a masterful album with last year’s shuddering ‘Disaster Piece’, and ‘No Way Out’, a claustrophobic collaboration with singer Animai, is the highlight. The MC has been on the scene from the early days, as a member of Pay As U Go and subsequently Roll Deep, his rich vocals cropping up on classics such as Lethal Bizzle’s ‘Pow! (Forward)’ and The Bug’s ‘Skeng’. While he throws out plenty of threatening lines (“Got a family of mad men that are willing to die, so don’t tempt me”) it’s Animai’s otherworldly delivery (“Hesitate, you fall below”) that chills to the bone. (SH)

Abi Flynn – ‘Ambiguous’ (2017)
Yeah, it was only released a few months ago, and yeah, it’s from her debut EP, but we challenge you to deny that Abi Flynn’s recent release is worthy of a spot in our top six. Title track ‘Ambiguous’ is as simmering and sassy as anything put out by her more established label-mates, with retro jazzy harmonies and a confident neo-soul rhythm. Flynn’s no newcomer to the Brighton gigging scene, having been a regular since her BIMM days singing covers down in the basement of Casablanca. Having developed her songwriting alongside her mesmerising performances, Flynn’s one of Tru Thoughts’ most promising newcomers. (JMM)

Sometimes an article is a bit of a team effort, and those are tagged SOURCE Writers. If you’d like to be part of that team, hit the Contact link at the top and get your work on this website.
← PREVIOUS POST
Thomas Truax Review
NEXT POST →
The Interval And The Instant Review
Mailing List
Recent Posts
Website developed in Brighton by Infobo
Copyright © Brighton Source 2009-2021
Six Of The Best: Tru Thoughts - Brighton Source