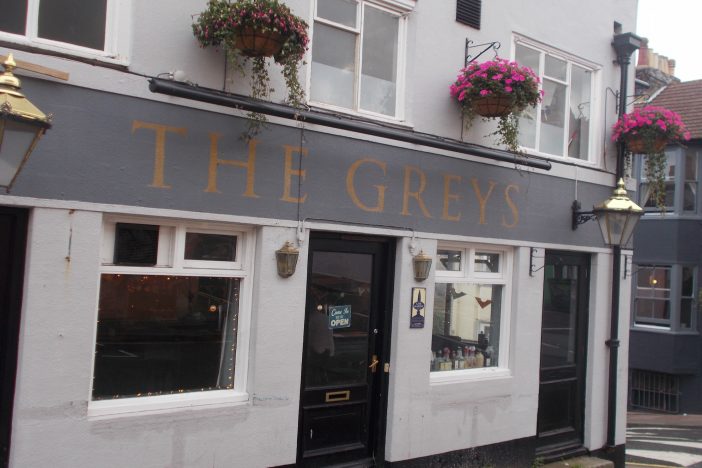 What can you do when one of the most famous pubs in Brighton is threatened with closure?

That’s the question residents in Hanover faced when they heard that The Greys in Southover Street might be sold. Their response: why not collectively buy it and make it a community-owned space?

We met up with Keith Farmer and Sharon Brown from Friends of the Greys to find out what’s going on.

“This is a great pub with a great history and a great future,” Says Keith. “It was stopped in its tracks by big breweries.”

According to Keith and Sharon, in recent years the Greys has suffered due to changes in the pub business. This has affected landlords, pub goers and the vibrant local community. But, they insist, the business is viable.

Currently, The Greys is owned by the Ei Group – one of the largest leased and tenanted pub business in the country with over 5,000 pubs – and they simply want to rationalise their estate.

There has been a pub here since 1878. For over a generation, The Greys has played a big role in Brighton’s music scene. It has been rated as one of the country’s top pubs – famed at different times for traditional Belgium beer and gourmet food. It’s always been a convivial meeting place.

“People like the pub,” says Sharon. “As a woman I always feel safe – I can go in on my own and there is always a nice atmosphere.”

The pub has been registered as an Asset of Community Value with local authority support. Local councillors, including Emma Daniel and Dick Page, are backing the community buy-out plan.

The Friends of the Greys now have until December 28th to bid for The Greys. According to the Plunkett Foundation, none of the 50 community-owned pubs across England and Wales have closed.

The Greys’ atmosphere has attracted international folk, country and blues artists. The ‘wall of fame’ by the stairs has posters of past performers including: Georgie Fame, Isaac Guillory, John Otway, Kiki Dee, Lene Lovich, Damien Rice, Bob Harris and Andy Roberts. Roger Daltrey has turned up to watch.

Music legends abound. According to Keith, when the punk poet John Cooper Clarke played: “He was 30 seconds into his act and blew his front tooth out.” The session stopped, the lights went up and the tooth was found. “He shoved it back in and carried on with the show!”

The Friends group – made up of Greys’ fans locally and internationally – want to create a vibrant ‘community freehouse’. By night, it will have good food and music and by day will offer a creative social space.

Keith and Sharon pointed out that Friends is definitely ‘not a talking shop’. You can help in many ways: by delivering leaflets, fundraising, contributing ideas to the community consultation, and most importantly by buying a community share.

Words and photos by Mike Aiken

Mike lives in Brighton. This is a full time occupation. He's also a researcher, writer and activist. Any time left over he spends hanging around cafes and pubs listening to people on their phones. He loves theatre that pokes into difficult places. You won't find him on Facebook.
← PREVIOUS POST
Tru Thoughts 18th Birthday Party Review
NEXT POST →
Bonobo, 21st November