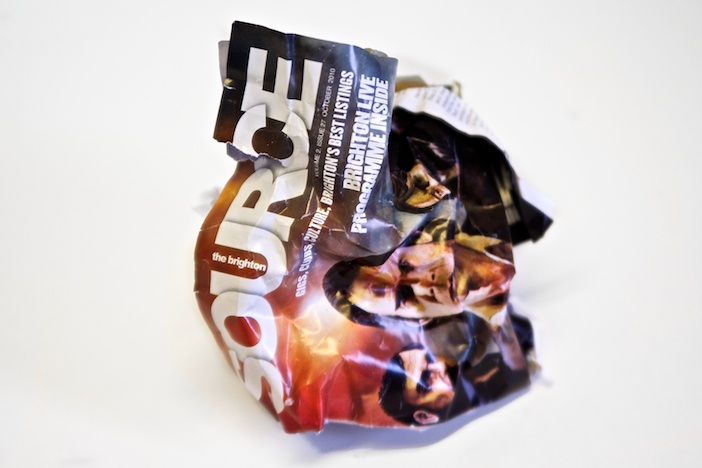 It’s with mixed emotions that we have to announce that the days of SOURCE as a traditional paper magazine have come to an end. The current December-January issue is our last. Despite a huge readership that has remained, while most other magazines circulations have plummeted, the change in advertising practices1 means that the financial support of the town is no longer sufficient to cover the costs of producing a quality magazine.

So, that’s the bad news. The good news is that the internet exists and we can do a lot of what we do already, better online. One of the best things about the magazine version of SOURCE was that it something to read while waiting for your mates in the pub, but that’s changed2. Now everyone whips out their phones. So we’re making a phone-friendly version of the site that will give you instant access to our invaluable listings and great articles to read. We’re also going to give the computer version of the website a refresh. But…

The website can’t exist without financial support. If our beloved advertisers are willing to move some of their advertising online then we can have a great site, but it means that you as readers need to support their supporting of us. Visit brightonsource.co.uk and look at, or ever better click on, their banners. 25,000 of you already use the site each month, so we’re off to a great start.

The costs to keep the website running are about a tenth of the cost of making the magazine (for a stripped down version), but the more support we get the better it can be3. We see The Source as a very valuable asset to the community, and with that in mind we hope to continue online. But we can’t do that without the continued support of our advertisers and our readers. But equally, if you’re not bothered we can close the website down. It’s not a big deal, and we won’t be offended.

We know that Source magazine holds a special place in many of your hearts – we’re frequently blown away by the affection for the mag – so we’re really sorry that this stage has come to an end. But after five and half years of scraping by it’s time to admit that magazines are no longer a way to make a proper living4.

We’ve had an absolute ball5, but it’s time to get proper jobs6 and make SOURCE Online a hobby. Thanks to each and every reader and each and every advertiser for letting us do this for as long as you did.

1. When The Source started there was no such thing as social media so club nights that wanted to promote themselves had two options, posters and flyers or local magazines. But now there are many options aside from print advertising. Club nights work on the ‘names-on-the-guestlist’ and ‘event invite’ approach (something that personally drives us mad) and we can’t compete with the price (ie free). So we lost the club nights, but we did a great job of replacing them with bigger brands advertising. But recently the decline in the magazine industry means that the budgets have been moved as the overall readers have gone down. Add in the loss of some of the venues in town – who either didn’t feel strongly enough about The Source, didn’t have any money in these dark times, or wanted (not unreasonably) to try other approaches – and we were running on fumes.

tl;dr Basically not enough people wanted to advertise in the magazine.

2. Mostly we’ve seen people carrying it home to read, which was really touching.

3. So, how it will probably work is this. Stage one is keeping the listings going. That costs £500 – so five £100 adverts each month. After that we would need to pay writers and editors. The next £500 would pay for daily news to be written and previews from our amazing Talent Pool to be edited and uploaded. It would also mean that we could keep Ben’s great live reviews section going. After that we could look at continuing our features, but let’s not count our chickens. Getting listings, news and live reviews happening would be a great start.

4. We’re looking instead at magazines that have made the move online like Fact and Dummy, and those that are as good online as they could ever be in print like The Quietus.

5. Some highlights: finding Bat For Lashes before she’d even released her first 7” single, seeing Rizzle Kicks get industry hands in the air at our Great Escape party, an intense interview with Yannis from Foals in the Heart & Hand, watching the Miserable Rich play their last ever gig at SOURCE New Music, being offered the chance to sing with The Maccabees in their practice room (all these resulted in the bands’ first covers).
Also, eating 15 burgers in a month, 42 slices of cake and gorging on curries, roasts and fry ups, plus compering Loops Festival as someone threw themselves from the top of the tent, and winning the Great Escape music industry music quiz more often than we lost.
And mostly getting to support so many talented musicians, artists and creative people over the years.

6. The SOURCE team are some of the hardest working and cleverest people in Brighton, and now they’re available to earn the wages they actually deserved. Click their names to email them job offers.

Rosie Kendall – Manager
Without Rosie The Source would have never made it through the first six months. She has kept it running on the tightest of budgets and never let us even miss a bill. Also kept the magazine error-free with her intense attention to detail. She’s interested in full time or part time offers her skills: management, administration, audio engineering and parallel parking.

Chris Lowe – Sales Manager
We’ve honestly never met a better human being than Chris, a man we’ve never heard a bad word about. Throws himself 100% into any job and wants to succeed more for the good of everyone than how he benefits from it. Hardworking and conscientious, he’d be an asset to any company, not just in sales. He’s looking for full time work – snap him up and brighten up your workplace.

Stuart Huggett – Deputy Editor
Incredibly hard working, insanely knowledgeable about music and extremely meticulous, Stuart is known in the office as a “safe pair of hands”. He never fucks anything up – solid as a rock. He’s normally done the task before he’s even asked. Stuart is looking for full time, part time and freelance work. He already writes for the NME and The Quietus among others

Ben Bailey – Listings & Live Editor
The listings is a dog of a job – five intense days of organising all sorts of nonsense into something that makes sense. Ben does it with ease and wit. How he concentrated to do it in the office is anyone’s guess. He’s also proved himself to be an excellent editor with the online Reviews section he’s built from nothing. Offer him full time, part time or freelance work.

Matt Barker – Designer
Matt’s current design of the magazine is one of the best things that ever happened to it. Function over flourish, he showed an Ive-like understanding of use and simplicity. He’s always extremely busy, understandably, but he’s looking to do more of the bigger design projects (like books) that he’s proved himself adept at.

Kenny Mc Cracken – Cover Photographer
Let’s not beat about the bush – the Source covers were probably the best thing about the mag, and Kenny Mc Cracken was completely responsible for that for the last few years, taking over from Kevin Mason who also deserves praise. Kenny was always surprising us with his levels of creativity, not least spending two days building the sea out of clingfilm for our One Inch Badge cover. He’s now freelance, so give him some work you’ll be blown away by.

James Kendall – Editor
I could write something about myself in the third person here and make myself sound great, but actually I’m going to use the space to say thank you to everyone involved in the Source for the last eight years. As the public face of the magazine I truly have been standing on the shoulders of giants. Special thanks goes to the Talent Pool of contributors. I hope you all carry on writing – if not for our website then for other magazines, you’ve all got it in you. I’m waiting for a job offer to be signed off, so am not actually looking for work, but email me anyway and say hi.