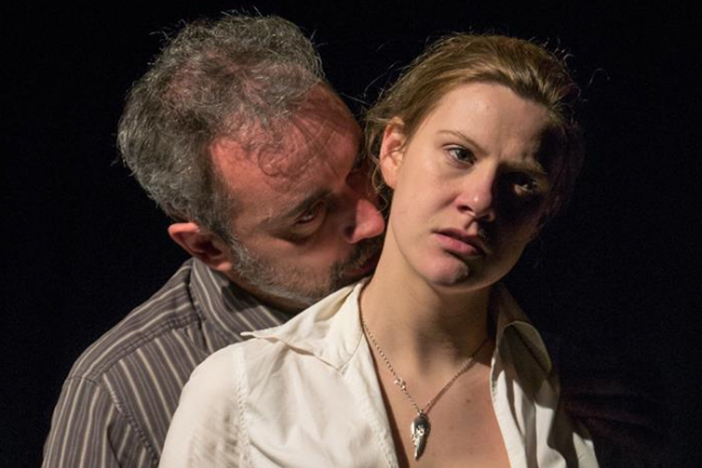 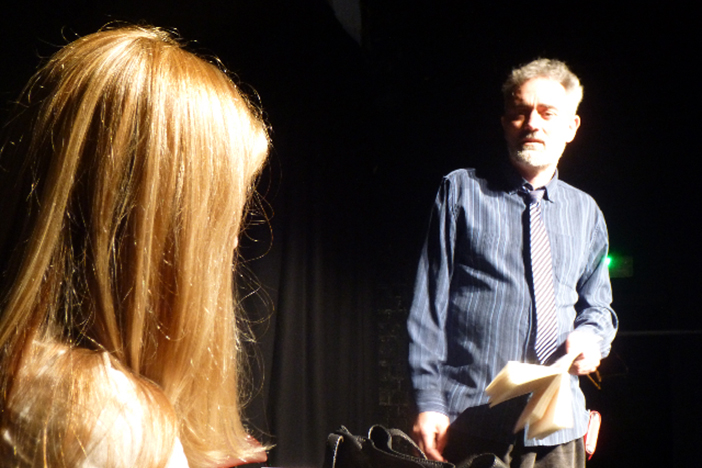 Can you imagine a meeting with your ‘ex’ 15 years after you split? If so, it probably won’t be anything like the encounter between Ray and Una, the lead characters in David Harrower’s Blackbird. They’ve got issues with a capital ‘I’ and an exclamation mark. This one act play was first performed at the Edinburgh Festival in 2005 and it’s still receiving acclaim. We went to find out why at a preview rehearsal at Rialto.

We meet Una and Ray in a scrappy locker room surrounded by rubbish. A black stage, some chairs and tables, a solitary window. This could be the back of a warehouse on the junction of a ring road somewhere near you.

Una keeps saying ‘yes’, eager to please, and ends up wanting to pull out his eyes. Neighbours are slapping her in the street. There are police, courts and therapy. Ray hears it on the news. He writes a letter that she never gets.

We follow Ray’s wringing hands and downcast eyes, but then he turns to anger. Una is bitter, ready for revenge, but then her body talks of desire. Dare we see reconciliation after guilt? It’s pretty clear what is right. But what’s obviously wrong is kicked so far off-kilter by Ray and Una the play ultimately poses different questions to the ones we were expecting. No spoilers here, but let’s just say it’s a secret you’d want to keep.

We meet the director, Sam Chittenden, at rehearsals and ask what excites her most about this play. She says: “This is a topic where there are very strong views. The writing is powerful – the dialogue feels for real.”

So what exactly happened between this couple? And are the characters telling us the truth about what they feel now? We begin to question and sympathise with a clumsy pair trying to sort out some truth from a horrific mess. That’s a feeling, at least, that’s familiar to most of us in the audience.

“Sometimes we don’t know what we think until we speak,” says Sam Chittenden. “That’s when we find out what we mean, what we know, and what we feel.”

Mike lives in Brighton. This is a full time occupation. He's also a researcher, writer and activist. Any time left over he spends hanging around cafes and pubs listening to people on their phones. He loves theatre that pokes into difficult places. You won't find him on Facebook.
← PREVIOUS POST
Gregory Porter Review
NEXT POST →
10 Of The Best Art Shows To See This May