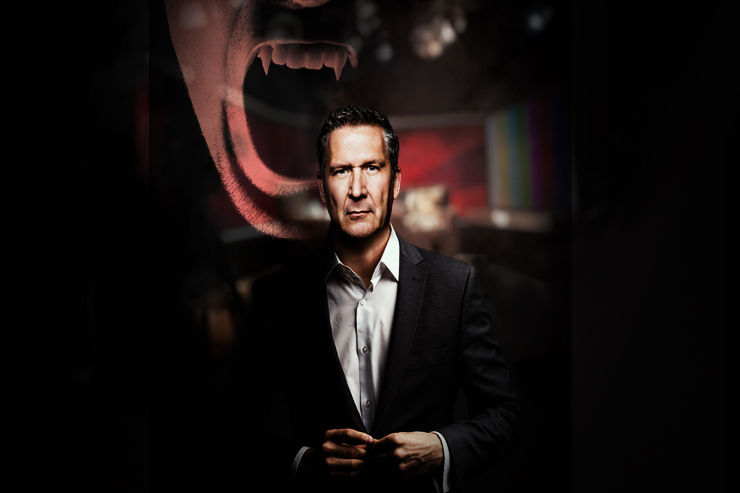 Pity the staff of Theatre Royal Brighton next month as Transylvania’s fearsome Count is due to take up residence at the illustrious theatre. For one night only the Count will roam the wings and backstage passages alongside the fourteen other persons that make up the production’s character list with all to be played by one man. James Gaddas – of Hollyoaks, Emmerdale, Heartbeat and Medics fame – brings his one-man adaptation of Bram Stoker’s Dracula to the Brighton venue on March 7th. The production – which he readily admits was his “lockdown project” – promises a new take on the 19th century gothic horror masterpiece and one that will ask of its audience whether we ever truly knew the tale of the blood-hungry nightcrawler.

Gaddas, known for his extensive work on the nation’s various soap operas, is full of admiration for the literary tale, that spawned our obsession with all things vampiric, as well as its author. “Today, he’d be writing for EastEnders or Corrie, and his storylines would be the ones to watch and enjoy, believe me!” Gaddas’ adaptation looks to breathe new life into an old tale and to “re-imagine” the story, staying faithful to Stoker’s vision whilst also bringing a new perspective to it. The result? “A very seductive thriller… that audiences really love to get their teeth into,” pun intended.

The show’s tagline – “One man’s search for the truth” – is an interesting one, and a nod towards this pursuit of the original in the antiquated, a fresh take on a story we continue to consume in its many forms, from Twilight to Hammer horror, Underworld to Hotel Transylvania. But where did this search begin? “The story resonated with me, even as a youngster”, Gaddas says, “and I must have been all of 11 years old or so when I saw it on TV in one of the movie versions which starred Christopher Lee – why would it not? All blood and fangs and gore, and hiding behind the sofa. It scared the very devil out of me! But, as I grew older, I realised that one got the real scares, the frisson of the hair standing up on the back of the neck, not from the poor woman screaming fit to bust at Mr. Lee, but from what the audiences didn’t see…”

The folk belief in vampires is believed by some to have originated because of a lack of scientific knowledge of diseases, in particular tuberculosis (with victims’ symptoms including light sensitivity, pale skin and the coughing up of blood… Sound familiar?). With epidemics coursing across Europe and further afield these beliefs would often divide and fracture local communities, sowing seeds of mistrust and fear as neighbour turned against neighbour. Now, in the wake of a modern epidemic, it is tribute to Gaddas (and Stoker) that this vampire tale is set to bring people together instead. A night of fun and fresh insights awaits us as we blow the dust from the cover of that ancient tome we know we should have read but probably haven’t. But never fear, our charming host will guide us… But only after dark.