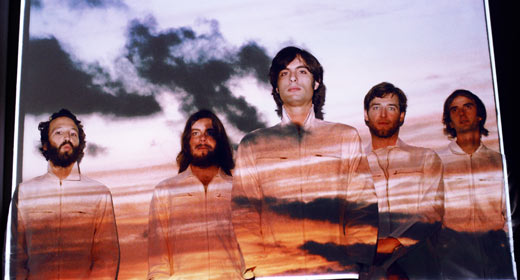 Back for its fourth annual outing, Vive La France hits town again from January 26th-28th. With a mix of French-linked locals and authentic Gallic vocals it’s a music and culture celebration, fuelled by tip-top cuisine from Mange Tout and Plateau and a general love of the French touch. It’s all come a long way since the mannered nuances of Gainsbourg and Piaf; hip UK ears have been tuned south since the importation of Air and Daft Punk, and the scene continues to make serious cross-Channel waves. Here’s a rundown of who’s gonna be where.

FRÀNcOIS & THE ATLAS MOUNTAINS
Green Door Store Thurs 26th Jan
Vive La France’s newest venue will offer a more chilled line-up, beginning with Brighton’s own Les Zuts, a Franco/Brighton band making their third VLF appearance. Mesparrow has been likened to a female Jacques Brel – a comparison borne out by her YouTube clips. Headliners Frànçois & The Atlas Mountains are also event regulars and perfectly encapsulate the flavour of the festival. L’Amour Electronique have been playing dreamy, bubblegum pop at The West Hill for ages and are the perfect choice to tie the evening together. (SC)

TURZI
Hope Fri 27th Jan
Day two has local four-piece Halfway, who draw on disparate influences to produce a musical hybrid. They are followed by 80s revivalists Concrete Knives. This five-piece from Normandy sound like I’m From Barcelona and could be the surprise of the night, given the unavoidably dancey songs on their ‘You Can’t Blame The Youth’ EP. Finally, Turzi, signed to Air’s label, define their sound as ‘rock disciplinaire’, which should make a proggy contrast to close the night. (SC)

PHOEBE KILLDEER & THE SHORT STRAWS
Green Door Store Fri 27th Jan
What better way to start the final night than with a DJ set from Transformer? Toulouse agit-indie funksters Sing Sing My Darling make a perfect fit, with delicious dancers like ‘Disco Love’ before Justine Taton rocks out with her ballsy, Joplin-esque power pop sound. The night ends with Nouvelle Vague alumnus Phoebe Killdeer, who will be showcasing her new project, The Short Straws. This new beefed-up Jack White-abilly set-up promises to send everyone home sweaty and happy. (SC)

FILM: AMELIE
Duke of York’s Sat 28th Jan
Last year’s late night showing of Delicatessen followed a suitably Gallic musical performance, so tonight director Jean-Pierre Jeunet’s later modern classic, Amelie, will see Audrey Tautou running around Montmartre bringing joy to all after a set from Nouvelle Vague’s Melanie Pain. Expect delicate originals from her solo album ‘My Name,’ mixed with punk and 80s classics delivered in a chi-chi cocktail style. Get yourself a bottle of rosé and settle down for this dreamy double-bill. (SC)

SEMINARS &
AFTER PARTIES
The Green Door Store will also be holding a series of talks and discussions with key players from the French music industry, throughout the afternoon of Saturday 28th. Journalists from The Line Of Best Fit, Les Inrocks and MOJO will be discussing the French music scene of the last 20 years and another informed panel will speak on the best way for British artists to tour in France. Plus, after each day’s events, Plateau will be partying into the night with many festival participants spinning les disques. (SC)