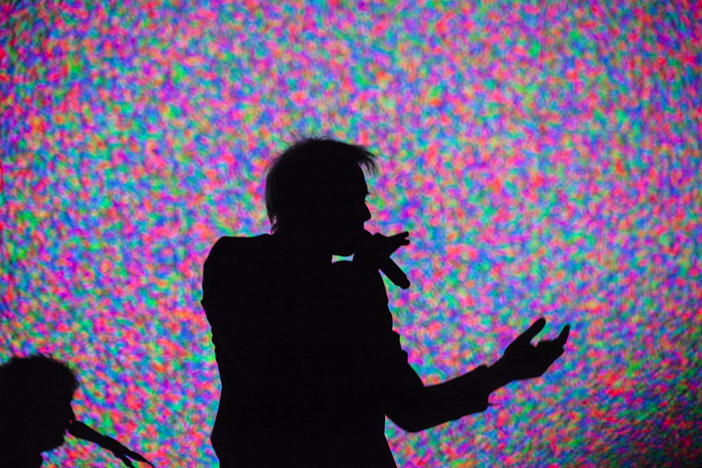 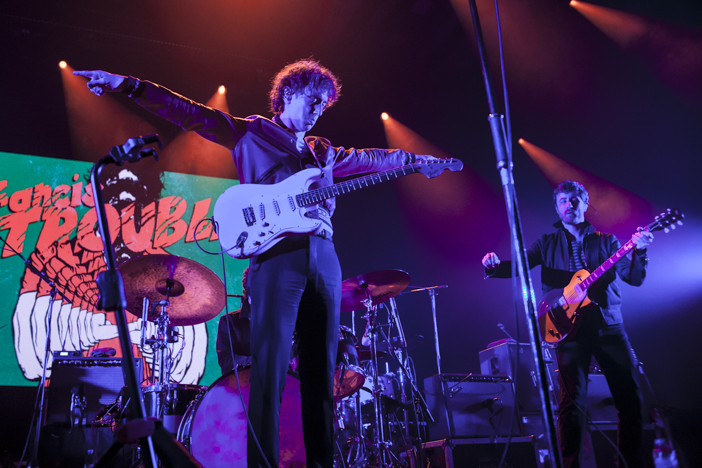 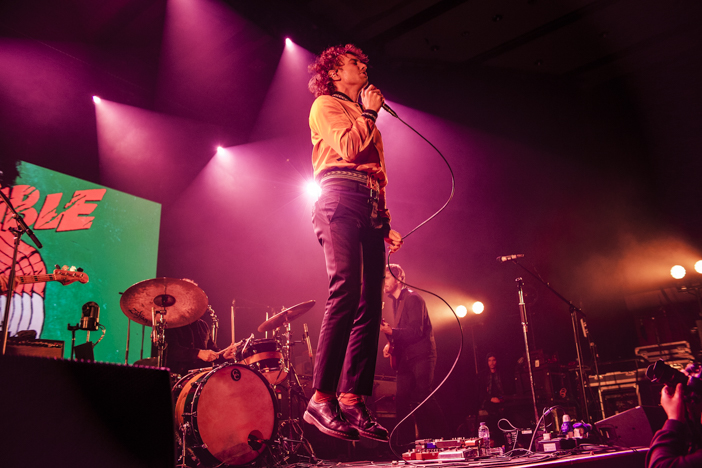 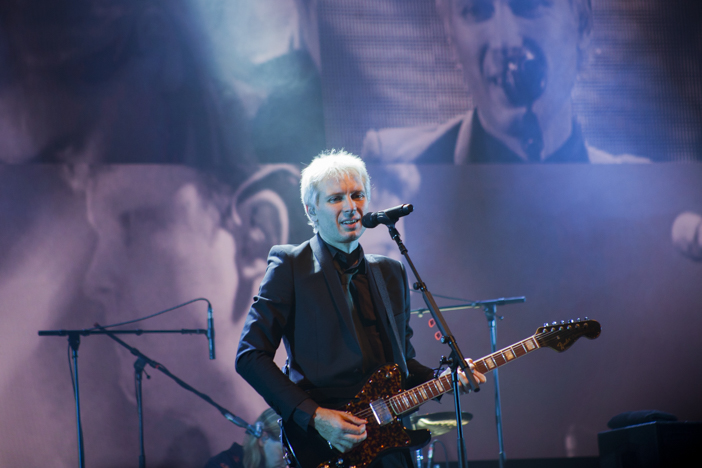 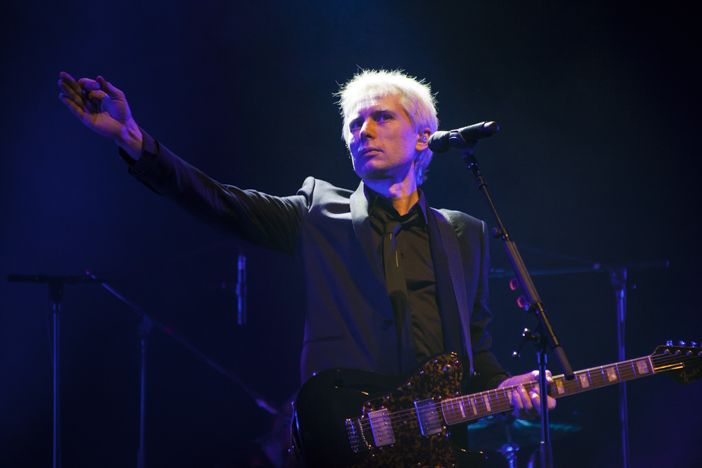 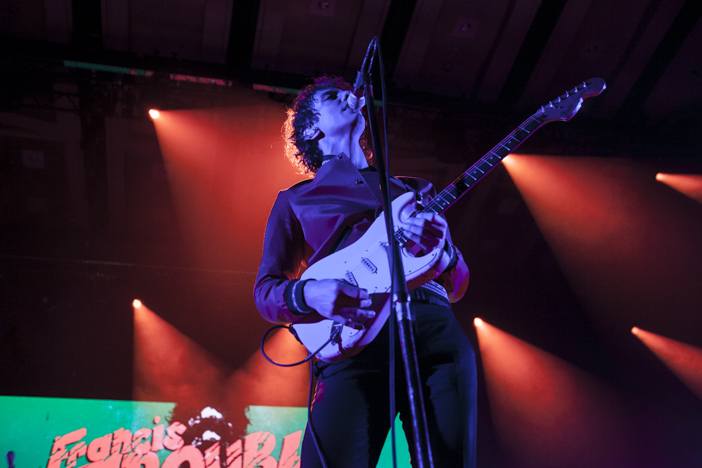 Albert Hammond Jr seems a man for a disco ball. Touring solo with a four-piece band, The Strokes guitarist’s wiry dancing exudes a distinctly New York cool – until he’s repeatedly afflicted by tiny shocks from a piece of his equipment, and has to dispense with the offending piece of kit by the side of the stage. 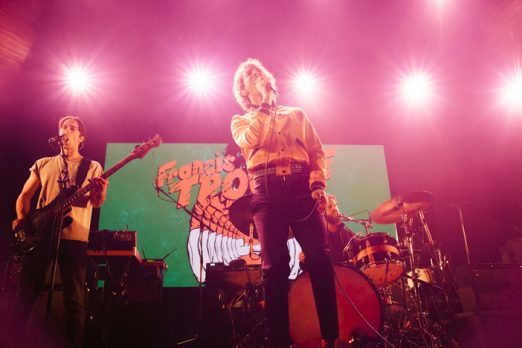 His performance is electrifying in the right sense, with songs from ‘Francis Trouble’, his new album about the stillborn twin he learned of decades into his life, sounding taut and energised. You can hear the unmistakable echoes of those spidery guitars from The Strokes’ empire-making first two releases, ‘Is This It’ and ‘Room On Fire’, as well as a flourish of funk here and there. Perhaps most striking of all is Hammond Jr’s playful, breezy charm – a superstar having fun, unwearied by all those arena tours.

Back in the mists of time – 2004, a distant era from which little camera phone footage exists – Franz Ferdinand were also trading in urgent bursts of on-trend insouciance. Alex Kapranos’s devilish smile and razor-sharp lyrical wit, coupled with a debut album redolent of an all-nighter at a Glasgow squat party awash with vodka, are still a huge pull here. But their trick has evolved from precocious punk to a mighty art-rock spectacle, full of rollercoaster races between seismic hooks and choruses. 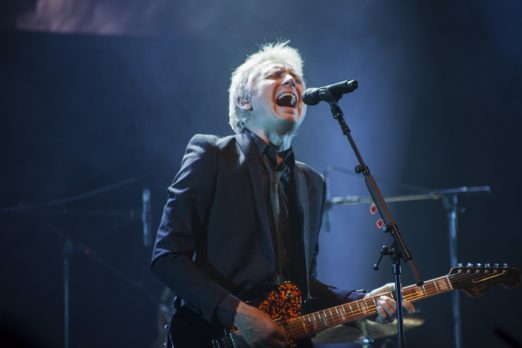 Nick McCarthy, the multi-instrumentalist who had been a founding member since their subculture beginnings, left before the recording of new album ‘Always Ascending’, to be replaced by Dino Bardot and production alchemist Miaoux Miaoux. Bardot’s sultry bass and a flash of tinkering keys from Miaoux are the underpass on ‘No You Girls’, a vehicle for the Teenage Kicks-thrill of Kapranos’s arch flirting (“kiss me where your eye won’t meet me”). ‘Do You Want To’ packs the sublime ridiculousness of vintage glam-rock, seized upon by Kapranos, in a glowering tone, repeating the mantra, “you’re so lucky”. “You’re all sexy,” he escalates, coyly adapting the build-up to ‘Michael’, a wry reminder of Franz’s whipsmart stylishness. 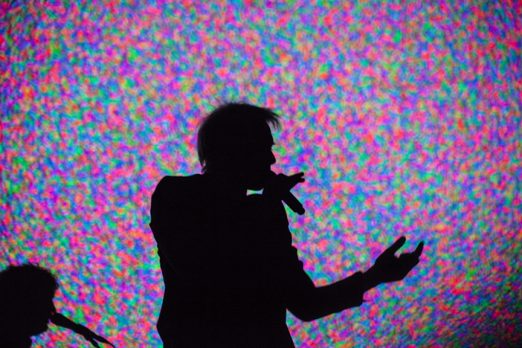 Despite the prickly, racing guitars, they unfurl these singles slowly, creating dramatic pauses and lavishly drawn-out drum crashes. If the crowd are nodding rather than dancing at the newer numbers, it’s only because the hits demand energy. The pit rushes to sing the pyromaniacal refrain of ‘This Fire’, submerging Kapranos’s yearning vocals. The last laugh, though, is all his – morphing subversive indie idealists into theatrical pop masters.