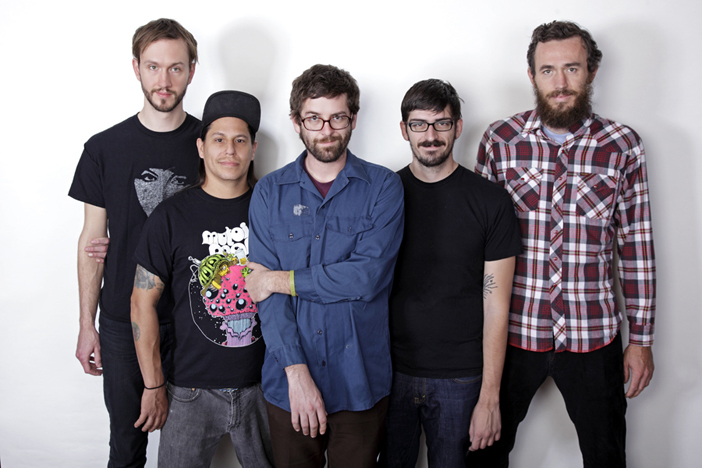 “It looks like it’s gonna be a wonky gig,” says a punter as the headliners do a hasty and informal line check. They start without any ado and immediately blow away our expectations. Originally a guitar and double bass duo, Andrew Jackson Jihad have pushed their lyric-driven folk punk through numerous line-up changes, but tonight we get the indie rock incarnation – and it’s more full-on and far louder than we anticipated.

Not that we really know what we’re talking about. Having first heard the band a mere eleven years after they formed (i.e. last week), we’re in the first flushes of a new romance. Despite a few early technical hitches – an electric cellist has just joined them on the tour – we’re already won over by the energy and wit of this weird nerdy band from Arizona.

The folk punk label is both accurate and misleading. More, it’s folk forced through the filter of a certain US indie punk scene; overdriven acoustic guitars played by guys with tattoos and black band T-shirts. One of them says Leonard Cohen, another says Slayer. As a statement of their influences, it kind of makes sense. There’s no shredding or bass pedal bashing (though they do play a song called ‘Angel Of Death’), but the metal is there in the band’s attitude, the goofy asides and the morbid lyrics.

Likewise, there’s no Hammond organ solos, but the kind of changes Cohen went for, the minor falls and major lifts, can be heard underpinning AJJ’s rough and ready distorted sound. Though Andrew Jackson Jihad come across like slackers shrugging off the burden of being in a band, the songwriting itself is spot on.

A mid-set solo acoustic song gives the band a break, before they come back on for a strident rendition of paranoid confessional ‘Big Bird’. With five albums under their belt and as many EPs, the band seem to rely mostly on tracks from the last two records. Thankfully, despite the volume, the words cut through. Sounding like a composite of Jeff Mangum from Neutral Milk Hotel, Bright Eyes and the guy from Violent Femmes, frontman Sean Bonnette has a canny way with words, often angry and self-deprecating at the same time.

“I’m a guy getting paid more than a girl with a degree,” he sings in ‘American Tune’, a sarcastic ode to white male privilege. “And I can walk down the streets after dark, no one wants to rape me.” Yet at every turn the anger is tempered by humour. “I’m a blank page in a notebook,” goes the opening line to ‘Angel Of Death’. “Waiting to be filled with countless drawings of cocks.”

Having moved through various shades of indie rock and country, the set ends with a synth-assisted wig-out that leaves our ears ringing. “We were hanging out on the beach earlier,” says the bass player. “I’d be great if we were huge in Brighton so we can come back.” The last (and first) time they played here was in 2010. Let’s hope we don’t have to wait so long for the next time.

Ben Bailey is the editor of Brighton Source and a freelance writer. He also plays in a few bands and can sometimes be found giving talks on a variety of niche topics. He lives in Brighton and rather likes it.
← PREVIOUS POST
Love Supreme Festival 2015
NEXT POST →
My Secret World: The Story Of Sarah Records, Fri 26th June
Mailing List
Recent Posts
Website developed in Brighton by Infobo
Copyright © Brighton Source 2009-2020
Andrew Jackson Jihad Review - Brighton Source