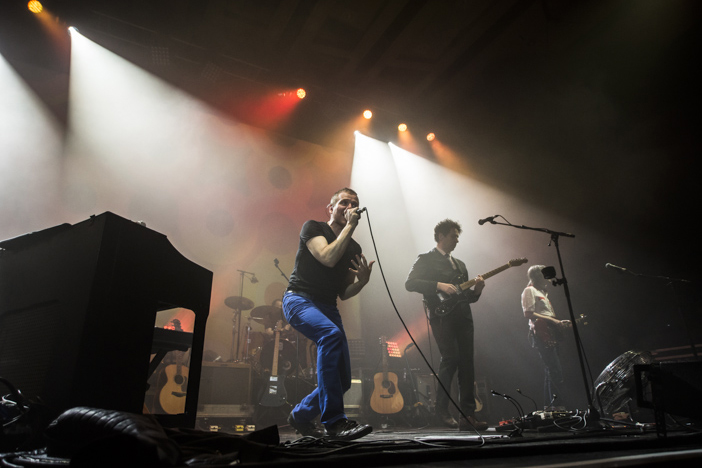 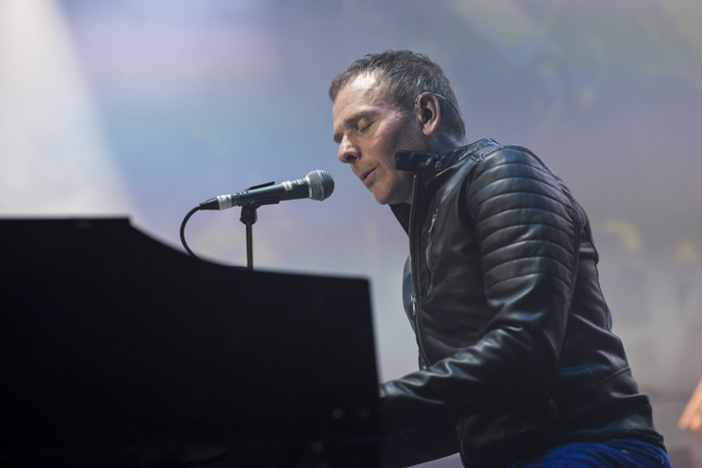 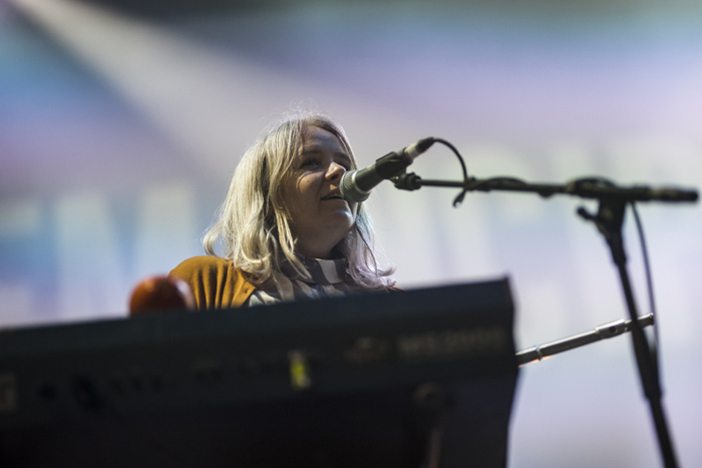 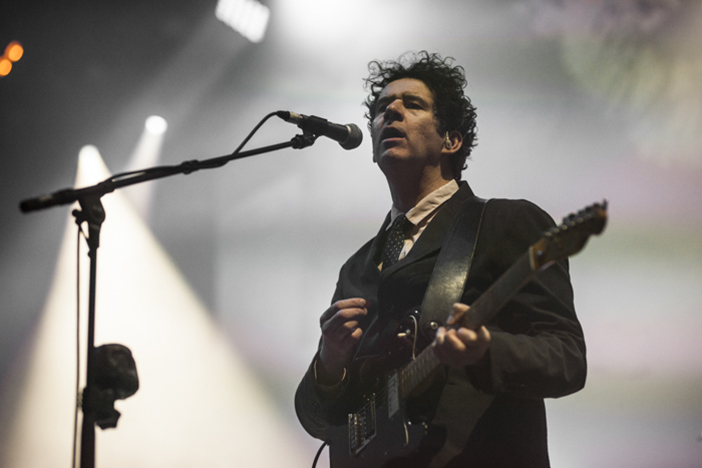 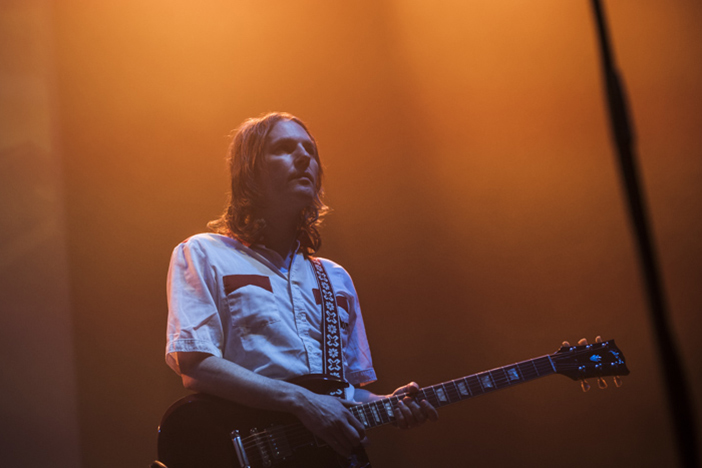 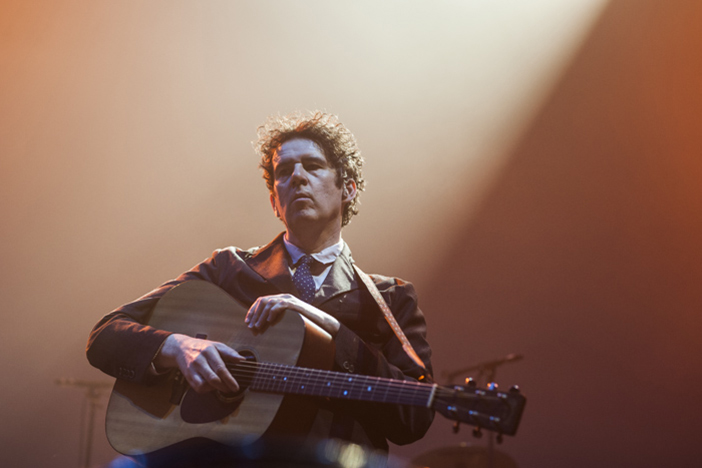 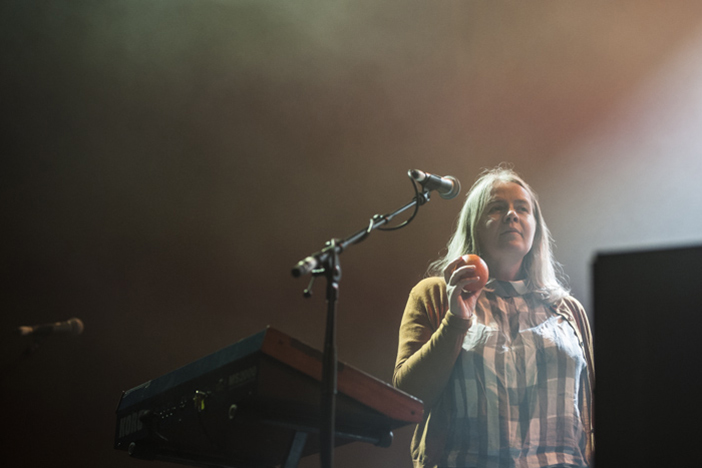 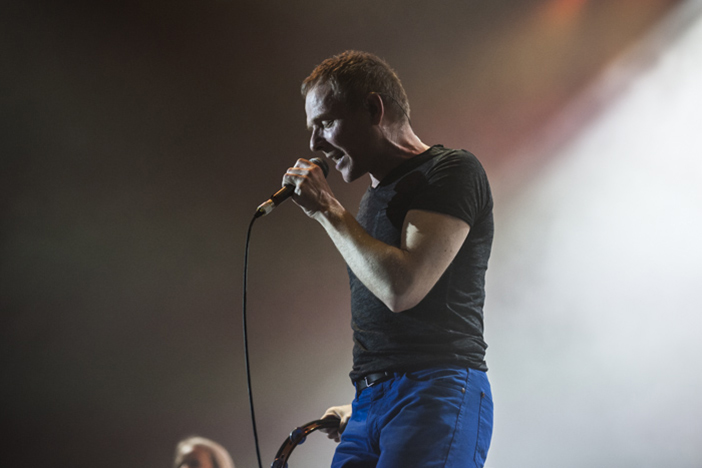 The disparate influences that helped shape the sound of Belle and Sebastian’s first records have remained fruitful, to varying degrees, for the last 20 years. Comparisons to The Smiths and The Velvet Underground may have been staple ingredients of early reviews, but those touchstones always obscured the fact the band members themselves had a much broader musical appetite.

Belle and Sebastian’s set at Brighton Dome tonight covers every era of the band’s history and draws from a deep grab bag of genres. It’s hard to think of many styles of pop that the band doesn’t dip into, at least in passing. Last year’s single ‘We Were Beautiful’, which rounds off an opening trio of new songs, features a downbeat synthpop verse that would just about work on a Pet Shop Boys album. A few songs later, ‘Sweet Dew Lee’, also taken from the band’s recent slew of EPs, leads off with some jazzy guitar chords and ends with a kind of 70s disco workout. Elsewhere in the set we hear shades of soft rock, folk, glam and funk.

At its best, this magpie approach turns up gems like ‘Sukie In The Graveyard’ and ‘Legal Man’, both of which are highlights of the show. At its worst, it results in songs that come across as one-trick pastiches. These, however, are few and far between. 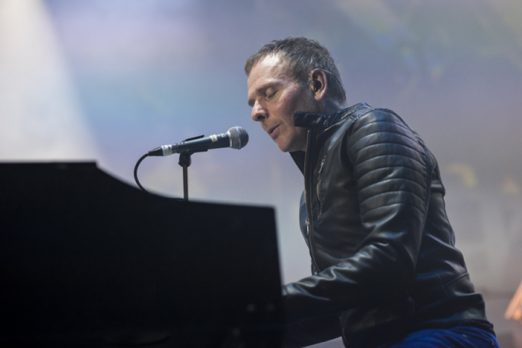 In any case, it’s clear that we’re a world away from the days when Belle and Sebastian were considered – for better or worse – the torchbearers of twee bedroom indie. Standing shoulder to shoulder with the duffle coats and woolly jumpers that fill the concert hall, we can’t help wondering if some fans have been left behind by the band’s flitting experiments. Are there people in the audience that can equally appreciate all the styles on offer tonight? Perhaps. Is it possible to ignore all this and get swept along by the fine musicianship and good-natured enthusiasm of a band who are still having loads of fun? Yep.

Of course, the guiding thread throughout is Stuart Murdoch’s gorgeous voice and lyrical wit. He also quickly proves that he has easygoing line in banter as well. Halfway through the set he introduces the crowd to an old friend of the band, up on the balcony. Mark Jones, who now runs an art gallery in the North Laine, was the boss of Jeepster Records and released both of the band’s breakout LPs in the 90s. In a touching scene, Mark stands up and proposes to his fiancé. Amid a roar of applause, she duly accepts (could have been awkward if she hadn’t). Down below, the singer dedicates ‘Piazza, New York Catcher’ to the couple and refers to it as the ‘origin song’ for his own marriage. 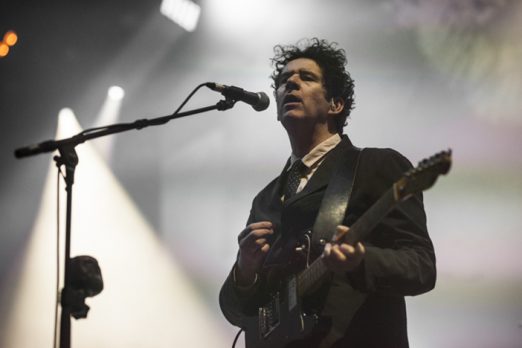 Though he makes a great frontman (and his eccentric dancing is a joy), Murdoch is always happy to throw the spotlight onto others. The band are regularly swapping instruments between songs, so it feels natural enough when guitarist Stevie Jackson and multi-instrumentalist Sarah Martin take over on lead vocals. Towards the end, two girls from the audience get on stage, and they look like they’re having the time of their lives, dancing wildly among the musicians.

A song later, they’re joined by a huge crowd of dancers plucked from the front row for a glorious rendition of ‘The Boy With The Arab Strap’. With the manner of a zestful church club leader, Murdoch ushers them all to sit on the edge of the stage as he ad-libs through the closing bars. It’s kind of silly, but it’s a lovely moment. 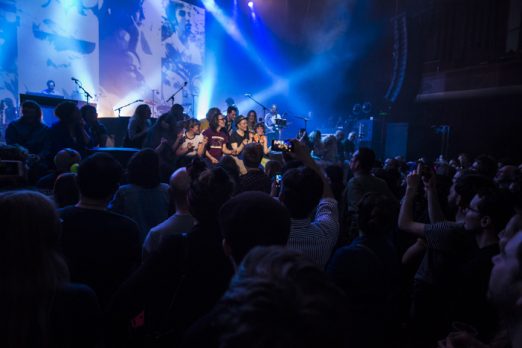 The selection of songs that close the show are switched around on the spot, seemingly on a whim, and the set proper ends with Jeepster-era favourite ‘Dog On Wheels’. After the mandatory encore break, the band return for their 2015 funk homage ‘The Party Line’, which again marks how much musical territory the band have covered since the early days. Murdoch exits the stage and reappears on the balcony, running halfway round the circle, still singing the chorus. It seems he can’t get enough of us.

The band’s new EPs all feature photographs of fans on the cover, while the musicians are entirely absent. Some bands like to talk about putting the fans first, but few really do much with the idea beyond getting matey on social media. Belle and Sebastian manage to make it sincere without being cheesy, which perhaps has always been their appeal. Many latched onto the band in the first place because the music spoke to them in a way that let them see themselves through the songs. We’re left with ‘I’m A Cuckoo’ backed by a video projection, presumably recorded the same day, of waves crashing on Brighton beach. The purpose of showing us our own coastline is unclear, but it’s a nice touch to the end of an endearing gig. 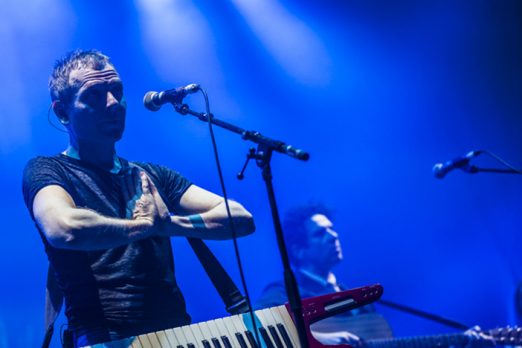 Ben Bailey is the editor of Brighton Source and a freelance writer. He also plays in a few bands and can sometimes be found giving talks on a variety of niche topics. He lives in Brighton and rather likes it.
← PREVIOUS POST
Tune-Yards Review
NEXT POST →
POLPO and Refuge: A Charitable Banquet
Mailing List
Recent Posts
Website developed in Brighton by Infobo
Copyright © Brighton Source 2009-2021
Belle and Sebastian Review - Brighton Source