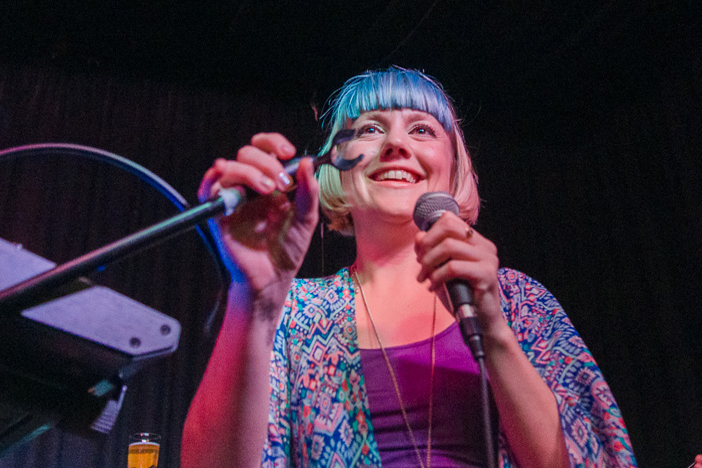 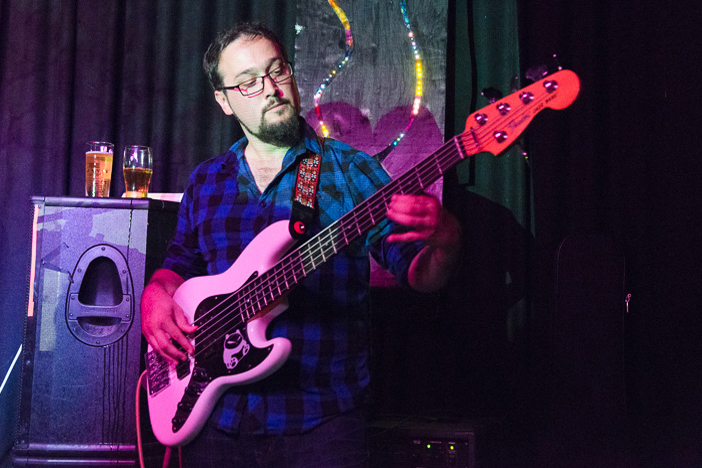 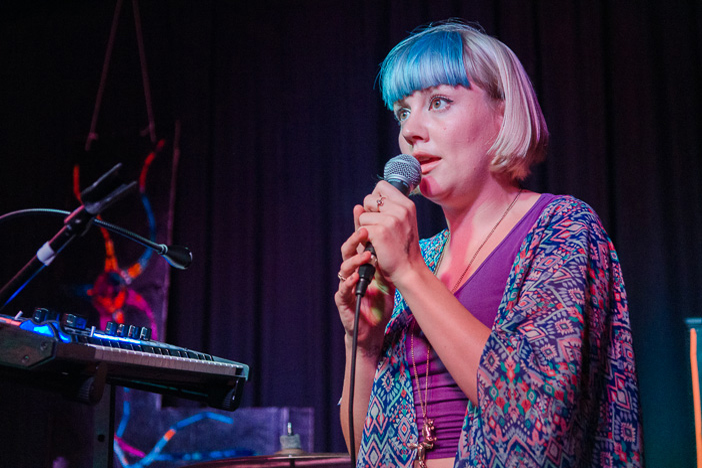 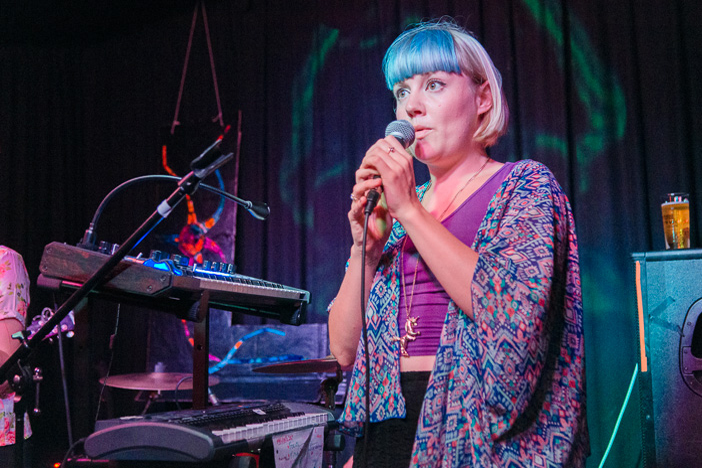 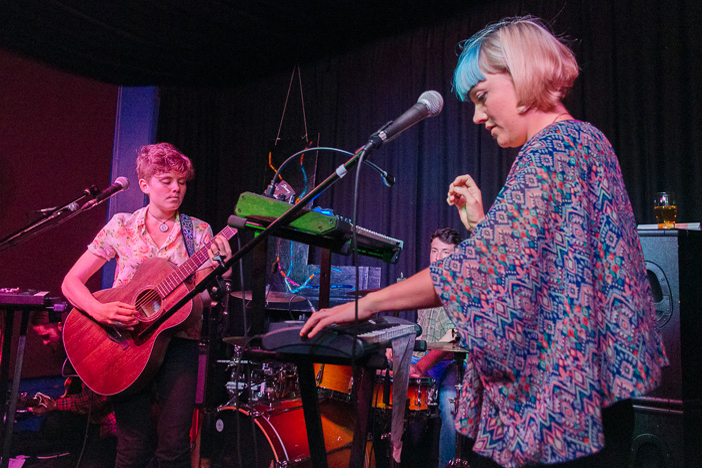 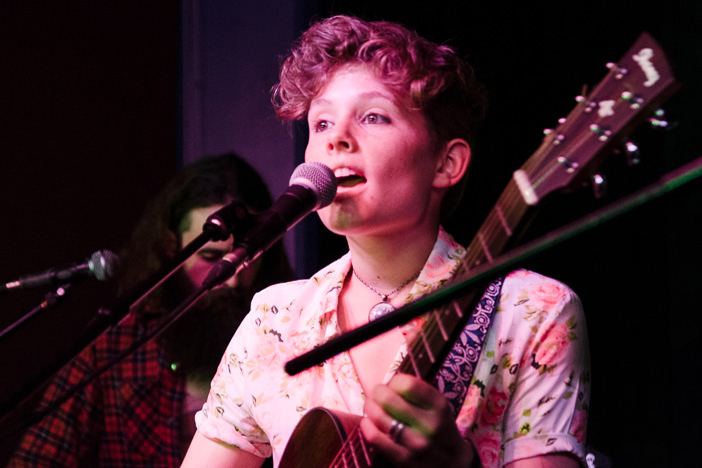 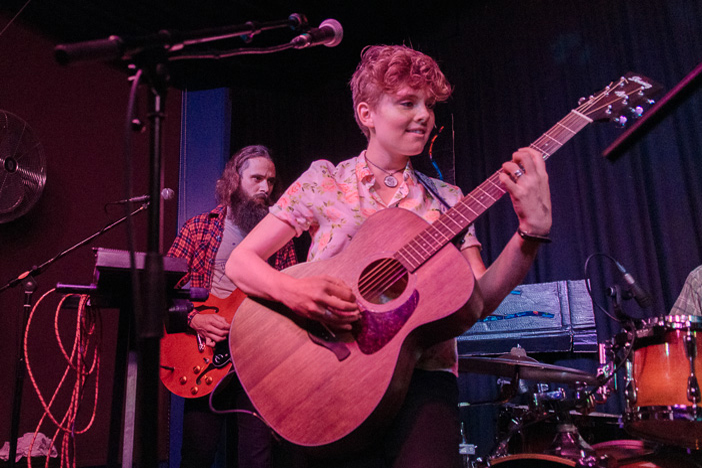 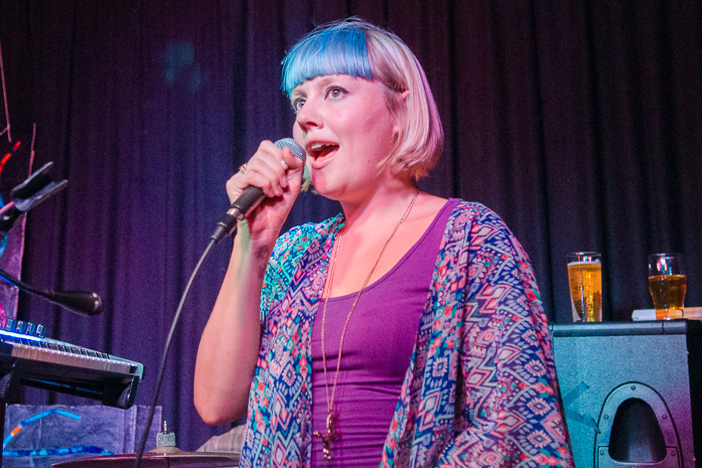 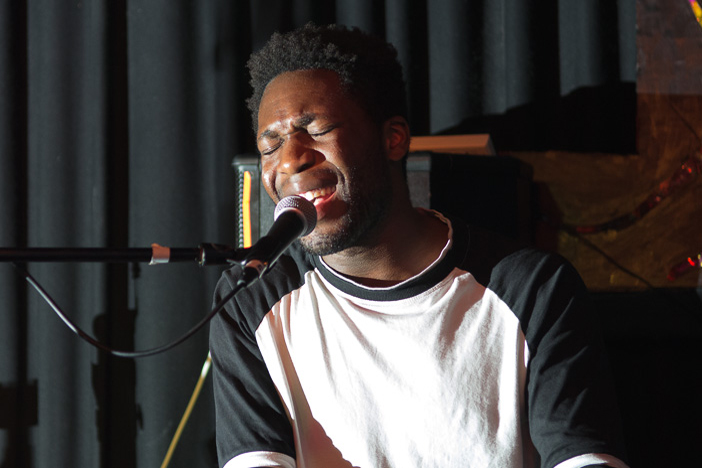 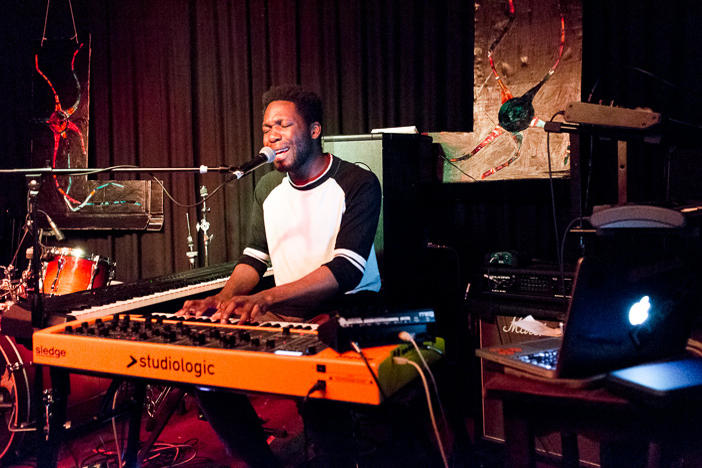 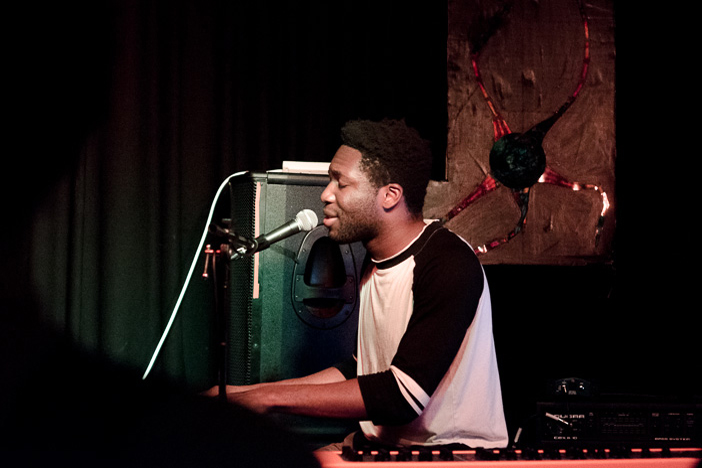 Triumphant isn’t the right word for a band so modest, but Bloom’s show at the Albert has all the elements of a great comeback gig. Last seen on a tour of the UK in August 2014, the band formerly known as The Beautiful Word were forced to take a year out when singer Megan discovered she had a cyst in her throat. This meant she was unable to sing (and, at times, even speak) and it prompted the band to take a breather.

Tonight they’ve returned with a new name and an all-new set. Any fears they’d have to start from scratch to find an audience soon evaporate in the sweltering heat of the packed out venue. “It’s so nice to see everyone here,” says Megan. “We thought people might have forgotten about us.”

Despite the heat, the crowd is happy and receptive. Earlier, during Tony Njoku‘s support slot, the room was respectfully quiet – which is just what’s needed to accommodate the singer’s strange and intimate ballads. Aided only by the occasional loop and drum machine, Tony Njoku no doubt won some new fans tonight with his faultless falsetto vocals and waves of synthesizer distortion. This is his first show in Brighton and nervous though he is, the crowd is onside. He ends with a cover of Anthony & The Johnson’s ‘Hope There’s Someone’, having polled the punters on choice of instrument: synth or piano. We opt for the latter, and it’s lovely.

As soon as Bloom get going we realise the cardboard sheets hanging at the back of the stage are actually part of a homemade sound-sensitive light display, the flashing multicoloured tentacles suggestive of a weird sea creature (we later learn they are inspired by neuron pulses). Over by the backbar, there are some unidentifiable white tubes hanging from the ceiling. Given the band’s passion for science, we wonder if they might be piñatas shaped like giant larvae pods. Or are they something to do with the Albert’s recent redecoration? The mystery is never explained.

What is clear is that this is a band that loves playing. From the off, the joy is infectious. The grooves are laid down by a casually precise drummer and bolstered by a bassist happy to leave all-important pauses in his playing. Meanwhile, the guitarist provides backing vocals and many of the melodic turns. But the spotlight rarely leaves the band’s two singers, Megan and Emily. They alternate and share lead vocals, piling harmonies upon hooks and adding their respective synth and guitar parts to the mix.

The Beautiful Word sometimes called themselves a folk band, but Bloom are no such thing. It’s pop, basically, without any of the dodgy connotations the word has acquired over the last thirty years. As if to prove the point they pull out a cover of Depeche Mode’s ‘81 breakthrough single that’s both fun and faithful, the song’s refrain of “new life, new life” echoing their rebirth as Bloom. Suffice to say, if the ‘twee’ elements of the band’s previous songs were typified by a toy piano called Joyce, the new stuff is much more about the synths.

That’s not to say Bloom haven’t shed their lo-fi approach. The singers seem a little nervous occasionally and joke around like they’re on stage for the first time. It might be the first time in ages, but the band is tight despite Megan’s apologies for mistakes that nobody notices.

The final track of the night, ‘Such A Shame’, is accompanied by a video projection showing an extreme close-up of a cartoon character’s vocal cords. Whether or not it’s a comment on the medical problem that almost derailed the band, it’s a brilliant song, and a fine way to end the show. Can we have some more?

Ben Bailey is the editor of Brighton Source and a freelance writer. He also plays in a few bands and can sometimes be found giving talks on a variety of niche topics. He lives in Brighton and rather likes it.
← PREVIOUS POST
Brighton Digital Festival 2015
NEXT POST →
Gwenno & H. Hawkline, Thurs 24th September
Mailing List
Recent Posts
Website developed in Brighton by Infobo
Copyright © Brighton Source 2009-2020
Bloom Review - Brighton Source