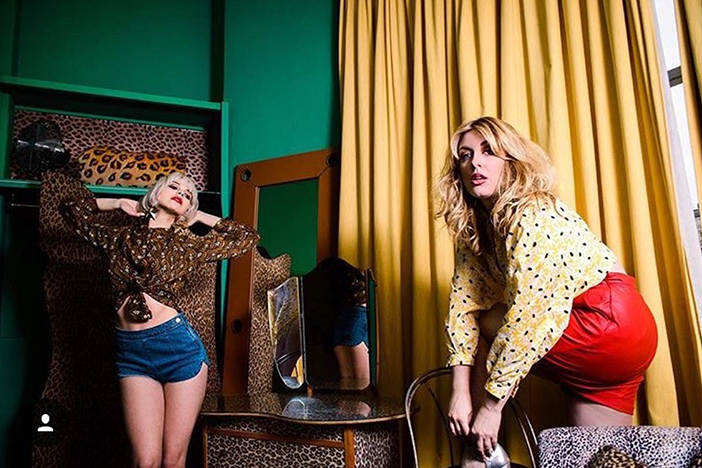 Beyond Retro, Brighton’s beloved reservoir for beaten-down brogues and vintage attire, tonight opened its doors to an evening of hilarious improv and cunningly devised sketch shows by comedy duo Bosh and Babbs. Over the top and hysterically relatable, the girls whipped up a series of loveably eccentric characters that were both cutthroat and catty. Tales were told that made us howl with laughter and on more than one occasion splutter back our beer, from drunken cookery disasters, TV séances to snogging Jeremy Corbyn – “because we’re all wondering what it’s like”.

The birth of Bosh and Babbs itself begun several years prior to tonight’s unparalleled performance, when Jessica Boshier, Kylie Babbington and brother Joel Babbington met at stage school. Getting together to take control of their creativity, the three worked on the girl’s character sketches with Joel as director. “We just want to make the whole world laugh,” said Joel.

Their performances have won them Runner Up for Best New Act at Sketch Fest, with their mockumentary web series ‘Obsessed’ playing LOCO Festival for BFI London. The show’s outlandish characters complemented a fairly unconventional venue choice. Where else are you going to get the chance to see great live comedy, knock back a free beer (courtesy of Brooklyn Brewery) and try on a vintage woolly jumper, a bit like the one your nan knitted you for Christmas. But cooler. Obviously. If there was ever a time to delve deep into the depths of your closet and dig up your beloved Spice Girls T-Shirt you wore that one time at a school disco, tonight was that night.

Keep an eye out for Bosh and Babbs as the team take their comedy sketch show ‘This Is Very Funny’ on tour across the UK. Or be sure to check out one of their London Smash Hits club nights, with the girls in character as 90s teens Jade and Gemma. Because it really is, very funny.