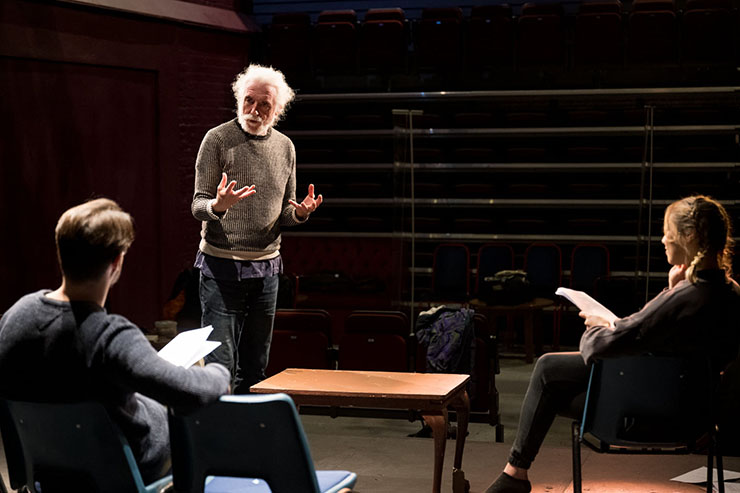 This is a psychodrama about a couple caravanning in Western Ireland on their honeymoon. He is a bit drunk in the fold-down bed. She is hoping the hitchhiker they picked up earlier might drop in. This is the start to a taut one-act play of physical theatre in the tradition of Pinter, Beckett and Berkoff.

So, his postcard from Ireland might have read: “having a lovely time in the caravan we always dreamed about.” No, she would say, “you might have dreamed of it – but not me.” She hates the Housemartins’ cover version of that famous song ‘Caravan Of Love’. But: ‘why does he keep playing it. Over and over?”

The arguments had already started, but the play doesn’t pursue domestic realism. We go beyond past romance and present strife into a psychological realm where what is real, imagined, or projected all blur into each other. Who is telling the truth? Are these characters even distinct people or are they just part of each other’s imaginations: all transference and projection?

There are plenty of puzzles and loose ends: Did he really kill that hitchhiker they picked up the other day? Did she really sleep with that guy?

Tom Daldry, who studied at Sussex University, has been gaining a steady reputation for his writing in the UK and abroad. With ‘Caravan of Love’ he has written a first-class play that explores the gap between what we know about each other in our intimate relations. It illustrates the puzzles of love, the chaos between us, and the fantasies we project onto the outsider. But, more than that, it explores the banality present in much of our (mis) communication.

This one-act play, which Patrick Kealey directed and performed, ran to just over an hour which was about right to maintain tension and mystery. The two main actors – Oriana Charles and Oliver Parnell – were on stage for most of the performance. They animated their roles – through precision in posture, glance and movement – to portray love, hate or indifference. It is also worth noting the dramatic role of the specially designed film effects (Sam Sharples) and the sound montages (Seisha Butler) which racked up the action. Hence, the sentimental songs of joyful marriage were distorted – beautifully – into the ugly squeals of attenuated static. The set, a minimalist open iron framework designed by Robin Crowley, provided the flexible backdrop while costumes from Rose Balp complemented Jonathan Richardson’s mood stage lights.

In line with Covid guidelines, Sweet Werks spread out the audience around the venue suitably – before, during and after the show. They also did a great job in converting what might have been a stark business seminar room into an intimate basement theatre. There was a cute licensed bar on the ground floor where you waved a hacksaw (supplied) to get served a drink!

Don’t try that at your local! Characters like the ones in this play will definitely give you bother.

Mike lives in Brighton. This is a full time occupation. He's also a researcher, writer and activist. Any time left over he spends hanging around cafes and pubs listening to people on their phones. He loves theatre that pokes into difficult places. You won't find him on Facebook.
← PREVIOUS POST
Africa In The Lounge - Livestreams
NEXT POST →
Brighton Music Conference Review