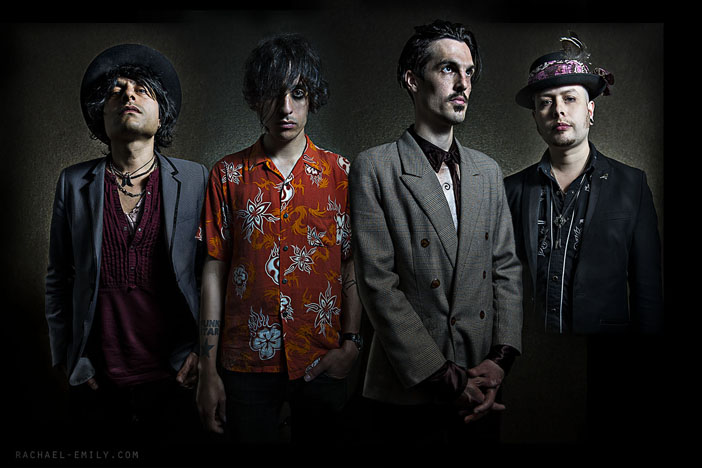 Behold the power of advertising! Last we heard of Eighties Matchbox, they’d staged a third album comeback and split up within a year. Despite being one of the most unsuitable groups of people to promote sport since McDonald’s sponsored the Olympics, Eighties Matchbox nevertheless got a good kick up the backside when their 2003 single ‘Chicken’ was used on a Nike football advert back in May. The resurgence of interest prompted the band to reform their original line-up and try their luck with a three date tour. Being local boys, the band’s Brighton show was always going to be the main occasion.

However, as soon as the band power up with ‘Freud’s Black Muck’ it’s clear there will be no sense of ceremony to this homecoming. Instead, it seems they’re determined to prove they can rock just as hard as their 20-something selves. On that score, they succeed outright. Once underway, the onslaught does not relent. If anything, the set – drawn exclusively from the first two albums – is played harder, faster and louder than ever. Even Guy McKnight is having problems keeping up. Choruses are abandoned and lines are left unfinished as he reels backwards for air – or dives, shirtless, into the throng in front of him.

Eighties Matchbox have always had a curious fanbase. It’s hard to think of another band with such a heavy sound that appeals to the sort of punters here tonight. The venue is packed with old Brighton faces – there’s indie kids and a scattering of gothic types, but few obvious metal fans. Perhaps it’s the rockabilly angle that put off most metal purists. Maybe it was the Jim Morrison and Nick Cave crooning that allowed them to get away with blasting such hard riffs into our ears. More likely, it was the band’s sinister sense of humour.

Tonight, however, none of this really gets a look in. The sheer speed and ferocity of the songs obliterate the elements that once tempered them, leaving us at the mercy of a monstrous and faintly ludricrous tidal wave of noise. The dubious sound doesn’t help, but it’s the continual strobes and leg-vibrating bass that eventually nudges the thrill of aural annihilation into uncomfortable nausea. It’s then that the SOURCE suddenly recalls a blanked-out memory of seeing this band appear from nowhere in a tiny tent compared by the Mighty Boosh during an MDMA accident at the Big Chill festival. Only difference is, this is more intense.

And then they stop. There’s no encore and several singles are left unplayed. There was never any chance the band would indulge in sentimental reunion guff, but the trio of gigs has done the trick. Two days later the band announce a Shepherd’s Bush Empire show in April claiming they have “unfinished business”. We were sure it was all over. Thankfully, it’s not.

Ben Bailey is the editor of Brighton Source and a freelance writer. He also plays in a few bands and can sometimes be found giving talks on a variety of niche topics. He lives in Brighton and rather likes it.
← PREVIOUS POST
Kins Photos
NEXT POST →
Brighton Rockers Interview
Mailing List
Recent Posts
Website developed in Brighton by Infobo
Copyright © Brighton Source 2009-2021
Eighties Matchbox B-Line Disaster Review - Brighton Source