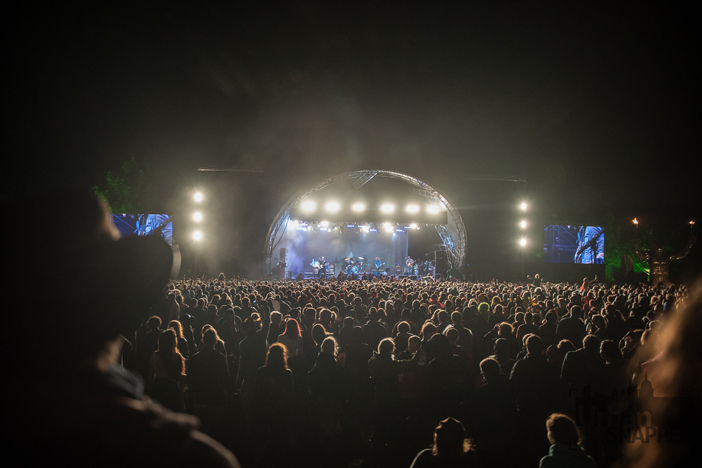 “There’s meant to be 20,000 people here,” says Paddy as he drives us across site in his golf-cart for no good reason other than we look lost and it’s late. “But it still feels more like a family, at least for us stewards.” We’ve missed the Thursday night bands by the time we’ve pitched up, but having spent all day driving from Brighton to the Brecon Beacons we’re not in the mood for turning in just yet.

People are drifting back to their tents, but we take a walk under the floodlights, amazed at how much litter has accumulated in only a few hours. It’s the biggest festival we’ve been to since giving up on Glastonbury and wandering round aimlessly has suddenly become exciting all over again. Twenty thousand sounds like a lot, but it’s not big enough to be bewildering and it’s not too small to see it all in one go. Importantly, there’s still scope for getting pleasantly lost.

We end up at the End-Up bar where we meet a buzzing couple from Bristol who are enjoying their first late night in years, having stowed the kid with relatives. They tell us they’re meeting a mate tomorrow who’s arriving via paraglider. We don’t really believe it until the next day when we spot a flock of them with red streamers descending from the peaks.

Seeing the festival in the daylight is a revelation. We’d been warned to expect constant rain, but this part of Wales is all sunshine, at least for now. Surrounded by mountains and dotted with huge ancient oaks, the location alone is worth the visit. The campsites are divided by stone archways with gatehouses and we find a gothic stable selling a hundred real ales and cider. It’s a far cry from the sort of Carling mudfest we once called fun.

We catch the end of 70s folk guitarist, Michael Chapman, and already we’ve bumped into someone from Brighton. There’s a lot of us about: over on the Last Laugh stage we watch local comedian Joanna Neary gleefully making a fool of herself with slapdash dance routines and knowingly naff one-liners. However, it’s her character comedy, squeezed though it is into a half-hour stand-up slot, which works best. Celia Johnson falling in love with a cold calling insurance salesman is funny even if you’ve never heard of Brief Encounter.

And then onto Beirut. Apparently the band’s first appearance here was something of a shambles due to their inexperience in the face of almost instant popularity. Who here knew they’d one day discover a love for melancholic crooning set to tuba-led oompah tunes? It’s an odd mix only in theory, and it sounds splendid on such a scale. Especially as this time round Beirut have it all under control. Suited and suave, Zach Condon treats the biggest audience of the weekend to an hour of precisely-played and emotive music from all three of the band’s albums. With no new release to promote, it’s a crowd-pleasing set by default. It’s one of the reasons we came.

Saturday morning we see another Brighton act, Sons Of Noel And Adrian, though they’re barely recognisable as the band we used to know a few years ago. What was once a multi-instrumental folk collective are now a taut krautrock ensemble powered by synths and distortion. We watch the band play an entire set of new songs, soon to be released as the follow-up to their 2012 album, ‘Knots’. Gone are the pastoral ballads; in their place are epic apocalyptic soundscapes full of proggy arpeggios and crashing guitars. The change of style isn’t the only surprise: the band’s two female backing singers also manage to incorporate some synchronised dance routines into the mix. What’s more, a couple in the crowd decide this is an appropriate time to start slow grinding.

We’ve already run out of money and food and the onsite cash machines are charging £2.75 so we take a trip to a nearby village. We pass a tempting pub, pressing on to the local corner shop only to find their machine is broken. We’re directed to another pub but they say they never had a cash machine and send us back to the first one. Half suspecting the locals are playing games with us, we’re not sure what to make of the chatty barfly who starts giving us the lowdown on the pub regulars. “You see that guy over there?” he says, pointing out the grandfather of a Welsh rugby player. “The other week he drove the wrong way down the motorway at 6am. He was going to McDonald’s to get his breakfast.”

Back on site, we queue up outside the Cinedrome, not realising Florian Habicht’s recent film about Pulp would be so popular with festival punters. No matter, we get in eventually and it’s excellent. More a study of Sheffield and the band’s fans than a standard music doc, we nevertheless relish the footage of Cocker shaking his stuff and leave disappointed that we won’t get to see them this weekend – or ever again.

Not that we have to wait long for a witty and singular songwriter. Jeffrey Lewis And The Jrams are playing on the Walled Garden stage and his lo-fi punk folk is a perfect antidote to the ‘atmospheric’ dirge of much of the main stage music. Highlights are the disturbing and comical story-song ‘Williamsburg Will Oldham Horror’ and the humbly inspiring ‘What Would Pussy Riot Do?’. As ever, Lewis’ musical comicbook stories make for a great interlude in the set, especially ‘A Brief History Of Communism’, which should be required reading for anyone who still thinks Platoon is the last word on the Vietnam War.

After witnessing Mercury Rev’s majestic and euphoric rendition of their 1998 album, ‘Deserter’s Songs’, we wind up at the fire-pit by the Green Man itself – a huge floral edifice of the festival’s namesake, sitting cross-legged and overseeing events like an impassive pagan Buddha. There’s a big crowd gathered here, enjoying the warmth of the fire and the songs that strike up from the numerous roving guitarists. Despite what bands are booked to play, festivals always come down to this: people round a fire making their own fun. We’re still there hours later, when the crowd has thinned to the hardcore and the wasted. It might not be what Paddy had in mind, but they’re a friendly bunch. We meet Northern Girl, a shy singer-songwriter with cracking voice; Sexy Folk Man, a guy with a sheepskin bodywarmer and sixpack who knows every song anyone requests; and Instrument Man who, after handing round his stash (drums, bugle, three banjos and an ocarina), promptly falls sleep next to the fire. Only when it starts raining, hours after sunrise, does it disperse. Instrument Man eventually wakes up, throws hot ash over himself to keep warm and stumbles off in the wrong direction, leaving most of his gear behind. It’s a great night.

For one reason or another, we don’t see much of Sunday’s line-up. The last act on the main stage is Neutral Milk Hotel and it’s the best show of the weekend. Having recently reformed after an absence of a decade and a half, the band took to the stage ragged and bearded like they’d been out in the wild, literally, living in shacks since their heyday in the 90s. They are here to play their acclaimed album, ‘In The Aeroplane Over The Sea’, a collection of cracked and beautiful songs apparently inspired by Anne Frank. The set is entirely more fun than the theme suggests, and the band – rocking out at every opportunity and swapping instruments after every song – are clearly enjoying playing again. The big screens on either side of the stage are turned off, we guess at their request. Likewise, the stage lighting is bright and static and there’s no sign of the smoke that swathed Mercury Rev. It’s simple and unpretentious and perfectly in keeping with the band’s energetic and fuzzed-up music. Furthermore there’s a sense of triumph to the set, as if what matters is not that a once-obscure indie band got back together, but that they’ve returned to find an audience they never had and are doing it entirely on their own terms. Rough and raw though it was, we loved it.

Soon after we’re stuck next to a group of sarcastic students making stupid jokes as the Green Man is burned to the ground. Fireworks are going off, it should be a momentous finale, but with little context it’s just an act of destruction. What’s it all about? A full-blown Wicker Man vibe would be preferable than clueless students taking the piss. Especially if they were inside it. Anyway, we soon get back on track with some late-night dancing in the Chai Wallah tent, more fire-pit singalongs and eventually stumble off the site on Monday afternoon, still hungover, smelling of smoke and happy.

Ben Bailey is the editor of Brighton Source and a freelance writer. He also plays in a few bands and can sometimes be found giving talks on a variety of niche topics. He lives in Brighton and rather likes it.
← PREVIOUS POST
FKA twigs, Thurs 2nd October
NEXT POST →
Gregory Porter, Weds 12th November
Mailing List
Recent Posts
Website developed in Brighton by Infobo
Copyright © Brighton Source 2009-2020
Green Man Festival Review - Brighton Source