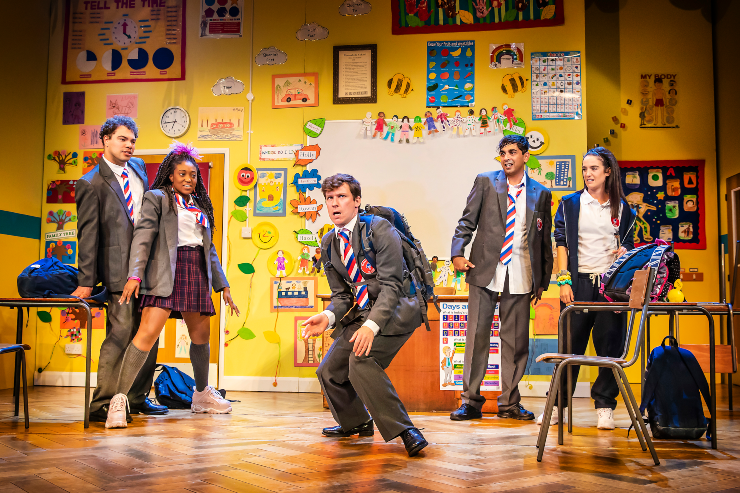 With The Play That Goes Wrong having so wonderfully welcomed audiences back to the Theatre Royal Brighton last week with a special gala performance followed by a week-long run, Mischief Theatre follow it up this week with something just a bit different. Groan Ups, their somewhat literal coming-of-age comedy, is laden with a little more substance than audiences might perhaps have been expecting…

Not that you would know this from the show’s opening. The production kicks off with the pupils of Bloomfield Primary School’s Yellow Group explaining what they did at the weekend through a musical game – hilariously but unknowingly outing their parents’ misconduct and outdated views in the process. We follow this group from primary through to middle school and then on into the second act which sees them return to the very same classroom as part of a school reunion. Here the classroom politics of yesteryear are revisited as the insecurities and crises that they have caused spill out amidst the gold stars and safety scissors.

Groan Ups is an interesting break in convention for the Mischief troupe. The show diverges from the signature meta-theatrical Goes Wrong variety that audiences have come to love and expect from Mischief but it stands as credit to a fantastic writing team – Henry Lewis, Jonathan Sayer and Henry Shields – that they have crafted a story infused with both comedy and nuance. Like its protagonists, the show is silly, loud and brash but it differs from the wayward heroes in knowing that it is so.

Groan Ups sits comfortably within its own absurdity, showing us adults and young people at their meanest, moodiest and maddest with tantrums, turmoil and some pretty grisly happenings to classroom pets. But this is a show about real people; not clowns or caricatures but individuals we can recognise (perhaps in ourselves) and their stories, funny as they are, are also told with immense care. It navigates the same minefield of hierarchies and relationships that we all once went through, only this time we are outsiders looking in and we’re able to see the makings of what we carry with us into adulthood – the insecurities and the habits, the pressures and the personas.

The superb script is brought to life by a cast that take clear advantage of the fun they are being allowed to have. Dharmesh Patel is a quick-talking Spencer, laddish and clown-like but fiery in his fidelity and defensive when pressed. With a frequently scene-stealing Matt Cavendish as Simon they anchor the shows dynamism and allow its energy to build and crackle. Director Kirsty Patrick Ward maintains and plays with this vitality but keeps it firmly tethered throughout, never allowing the oversized characters that fill undersized humans to overspill and mar the show’s through-line. A cumbersome scene change masked by a slightly underdeveloped sketch is the only occasion when the tempo stumbles. But this seems like an unfortunate impracticality of touring and the alternative would be to lose out on a fantastic set (designed by Fly Davis) or to restrict the touring potential for this show. And it would not be right to deprive regional audiences of shows like this.

Because Groan Ups is entertainment with a depth to it, it is escapism with heart. It is the play that goes right (and we’re sure we’re not the first to have written these words when discussing it). The mess of plot lines beautifully interweave into a finely crafted piece, with some strands resolving perfectly whilst others are left to spiral out, unsettled and inconclusive. But perhaps that is the point. The play’s message amid the mirth, the thought amid the farce, is that life remains unsettled and inconclusive no matter how old we are because we never stop growing. Lives ongoing, stories unfinished. And if we must keep growing older then we might as well enjoy the laughs along the way.