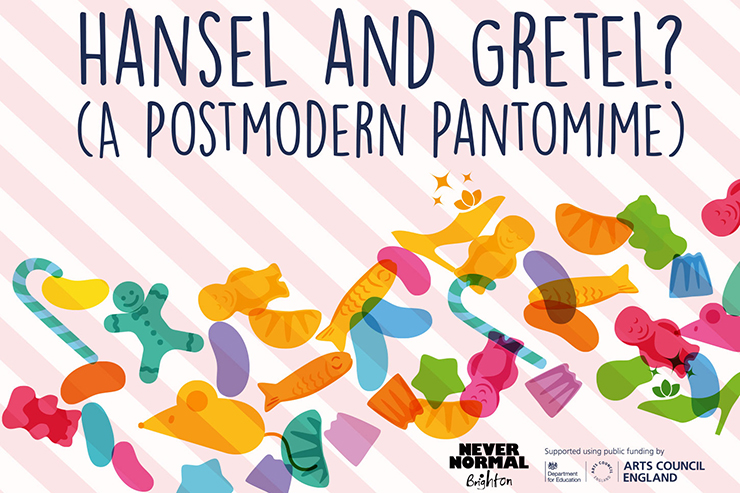 Let me be honest. I haven’t seen a panto since I was 14. So I expected that writing a review of Hansel and Gretel for Source was going to be a challenge. All that buffoonery of ‘oh no she isn’t’ and ‘he’s behind you’. And the cross-dressing of leading characters that has been the new norm inherited by Pride Carnivals in the twentieth century. But Will Mytum’s cunning production, directed by Luke Francis, had me on-side, yes – laughing and shouting out – within five minutes. Near instant conversion! So, what were the ingredients?

The art of pantomime can be tracked back to the medieval era and many of those original elements still appear today. So there’s a crazy mixture of entertainment, silliness, political satire and poking fun at authority. In the familiar folk story, Hansel and Gretel, those elements are threaded into plenty of audience participation and fancy effects. It definitely works at two levels: keeping the kids laughing and just slightly scared while stuffing in enough inuendo and digs at authority figures to keep the adults in their seats.

What better place to perform the tale of two kids getting lost in the woods than the Brighton Open Air Theatre in Dyke Road just before the winter solstice? The night sky looked stormy enough to spit sleet at any moment. The stage lights had turned the elms spooky blue. And an invisable virus had got us all siting two metres apart in a full house. Clever ticket holders had brought a hot water bottle, a thermos and an umbrella.

But let’s get to the action! In any film or play that takes the characters into a forest you know there’s going to be trouble. Hansel and Gretel (played with conviction by Antonia Draper and Jade Kennedy) seem dimly aware of this trope. Indeed, the evil step mother has plans to murder the two brats as a means to inherit great riches and live in a big house somewhere posh like Roedean. Hansel and Gretel’s walk in the black forest sees them take the precaution of dropping a trail of white bread so they can find their way back. Don’t try this in Pavilion Gardens, of course, where an armada of pigeons will eat your direction home.

This is a postmodern take on the tale, so our aimable and at a times despairing ‘director’ and host Malcolm Sixsmith (Douglas Rutter), comments on the script, the audience and the actors. As our unreliable narrator, he tells us the lead actor was taken ill so would anyone from the audience like to play joint leading role at the last moment? But drat! Even his megaphone is not working. Frankly, ‘the story is a lot of nonsense’ he tells us. Then we get back to the action.

But a feast for the eyes and ears is coming up through a dance routine by Hansel and Gretel to Kate Bush’s ‘Wuthering Heights’ beautifully choreographed and performed. There are rolling scarves and roving lights and full body stretches to the lyrics. Bad dreams in the night? This vignette is perhaps one of the gems in the panto. Strong taut movement, a swirl of multiple silk scarves, and roving lights make this seriously melancholic. But could it be a tad shorter?

The kids are lost in the wood eating suspicious looking mushrooms. Ms Nefarious (Dafydd Weeks), a suitably porky cross-dresser plays a caricature of the greedy stepmother, ‘I wouldn’t hurt you, children.’ Burp. ‘I love you.’ A tremor in the audience. Then the terrible and camp Wolf Dragon appears.

Our host appeals for calm. Maybe Marcus Rashford – footballer turned social activist – would take up the case for more substantial fairy story meals for the children and a pathway back to society for the outcast Wolf Dragon? Fully rehabilitated perhaps Wolfie could turn vegan?

Our two lead female actors, as the two kids in the wood, are hardly off stage throughout the performance. But how will they escape the threefold threats from the forest, the Wolf Dragon and evil Mrs Nefarious?

Our long suffering ‘director’ might see the plot as thick as mushroom soup, breadcrumbs and vegan side dishes but we’re enjoying it. The final straw is when he, now despairing, gets lobbied by the rest of the cast to introduce Cinderella to give us a pretty ending. How far can you push the guy’s artistic integrity!! ‘NO’ He pleads ‘I know I said it would be postmodern but this is going too far. Cinders is a different story!’ He pleads. Might this be the Death of the Director? Where is he? We are all shouting.

Let yourself go. Text: ‘enjoy panto like this up to 24th December.’

Mike lives in Brighton. This is a full time occupation. He's also a researcher, writer and activist. Any time left over he spends hanging around cafes and pubs listening to people on their phones. He loves theatre that pokes into difficult places. You won't find him on Facebook.
← PREVIOUS POST
Two Decades Of Funk Fire With Jalapeno Records
NEXT POST →
Artists Open Houses 2020