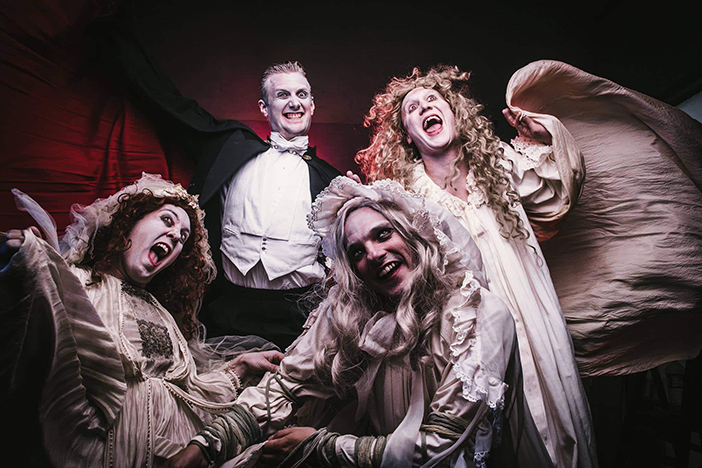 This is horrific theatre. The actors forget their lines, their wigs slip off, the sound and lights are out of synch. Even the scenery falls over.

Are we disappointed? Not a bit. ‘Dracula The Bloody Truth’ is a thundering and outrageous spoof that has adults and children in splits.

This adaption, directed by John Nicholson, deftly snakes through Bram Stoker’s classic tale and disrupts it at each turn. The performance meticulously sets up every theatrical convention and then breaks it – to the glee of a full house.

Has the spooky soundtrack been turned on too soon? Is that splurge of blood just a soggy rubber mat? Doesn’t that dislocated head look like a cheap paper maché mask?

“It’s not theatre you fool!” Our narrator insists. It’s a public information broadcast about the dangers of vampires.

We take a horse and cart on a four-hour journey through the Transylvanian mountains to Dracula’s castle. We hang around in the dockyards of Gdańsk. We await the landing of Dracula’s precious cargo in Whitby. But surely, as one of our heroes argues, Dracula is avoiding EU regulations by importing dodgy stuff in containers?

It all ends at midnight in the graveyard, of course, with a trembling ‘woman’ in a white dress – cross-dressed actually – suitably accompanied by a defiant and bloody Dracula.

The play, craftily designed by Phil Eddols, is performed by just four blokes – sometimes in drag – who engage in hilarious costume changing. It’s a quibble to say that, amid the raucous din, not every joke is audible. But the actors are undertaking that most masterful of arts: performing faultless bad acting to comic perfection.

This is a delicious mix of farce, clowning, slapstick and irony that’s a specialism of Le Navet Bete’s theatre. Dracula will be turning in his coffin.

Mike lives in Brighton. This is a full time occupation. He's also a researcher, writer and activist. Any time left over he spends hanging around cafes and pubs listening to people on their phones. He loves theatre that pokes into difficult places. You won't find him on Facebook.
← PREVIOUS POST
Moulettes, Sat 2nd Dec
NEXT POST →
Benjamin Clementine, Thurs 30th Nov