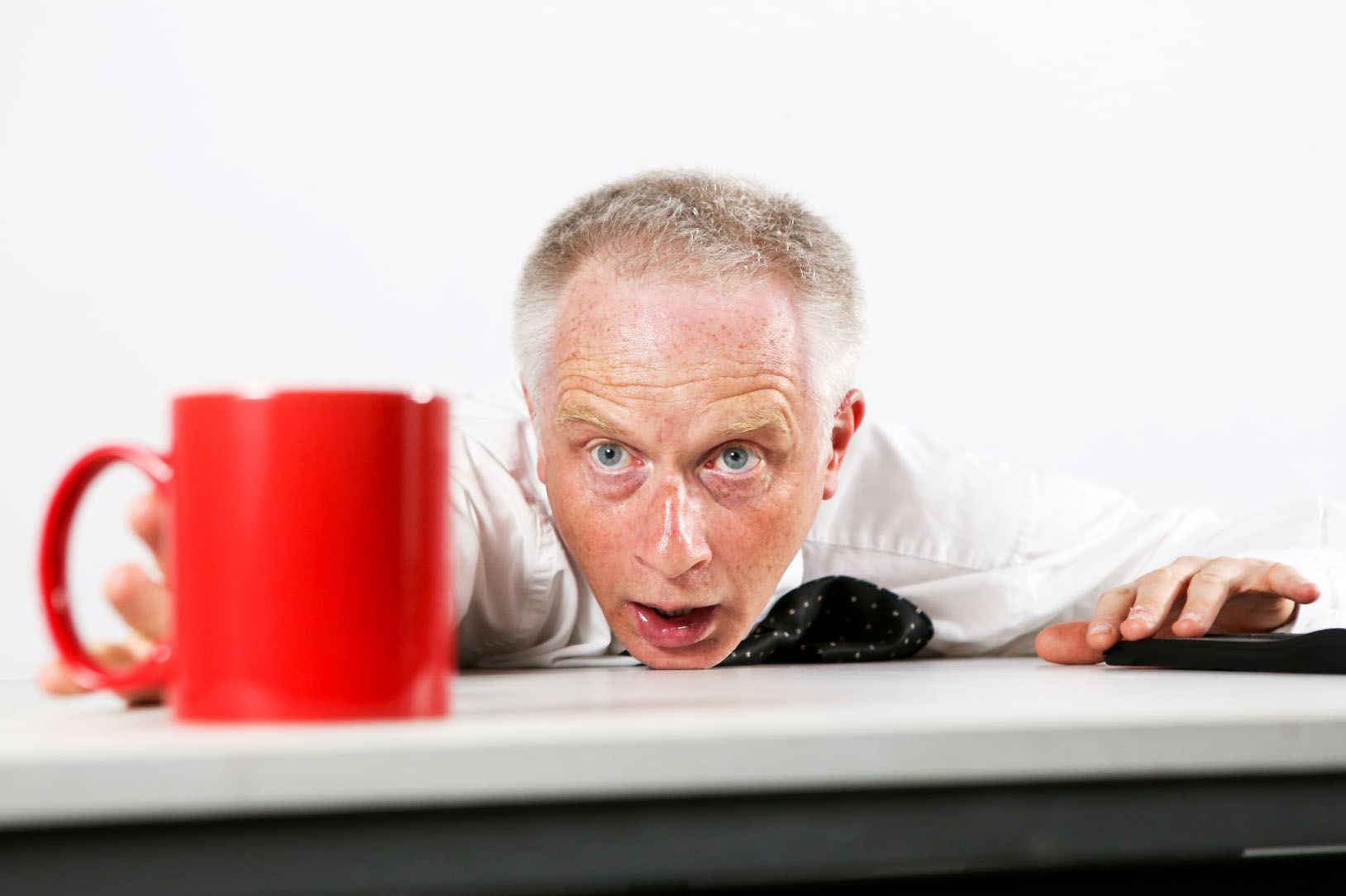 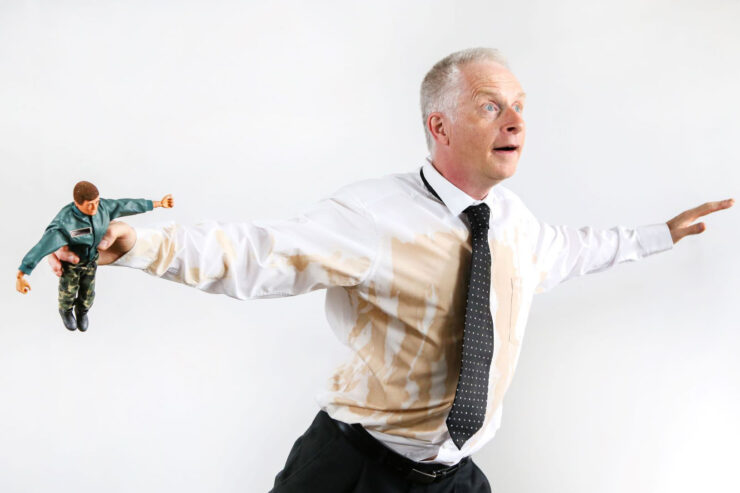 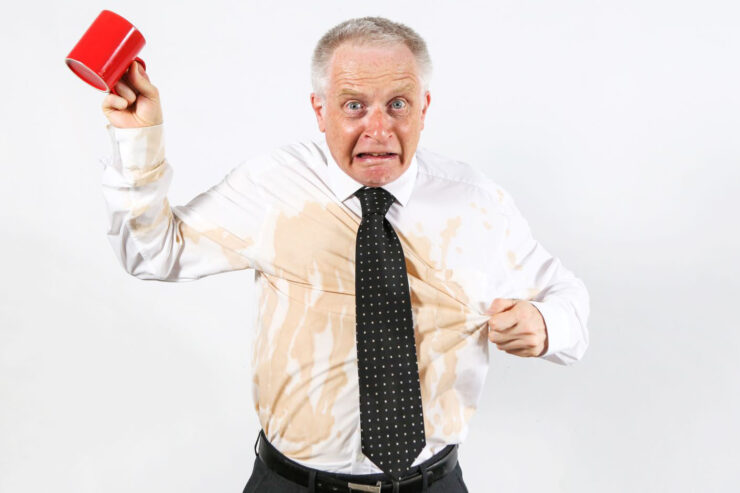 Stewart Taylor is a poet, performer and rascal. He’s on stage for over an hour and he won’t let you go. He’s got a deadline to meet, stupid!

But he won’t get nowhere with a shirt like that! It looks like someone has spilt coffee all down him. Who is doing the costume for one-act, one-person shows these days?

Stewart takes us on a modern odyssey through one man’s subjection by the corporation. It’s the struggle against impossible demands and changing deadlines that would drive anyone to madness. His journey takes us, first, through complicity; then into timid negotiation; and on toward resistance. Yeah, hurrah!

But his phone is ringing.

“We are still waiting for the presentation – yes, I know, we said tomorrow, but now we need it by the end of today. Hello? Are you listening? Hello?”

Stewart’s journey leads us through vicious challenges, forests of corporate jargon, wild beasts of demented impossible shape-changing deadlines, in order to expose – in depth and glaring honesty – the meaning of his dirty coffee-stained tea shirt.

But listen! How how far back does spillage go? It might return us to a time when we were apes swinging from tree to tree. The audience got fully involved in this: “listen up folks and discover those ape lobes you had before you evolved into corporate slaves. Why not try it right now?”

There are some cute songs to keep up our morale. We could hum along to some cool Latino vibes. But remember that even the actual girl from Ipanema got a lawsuit for opening a café – in Ipanema – called ‘The Girl from Ipanema’. That’s mad too!

Our tortured hero cowers ever tighter beneath the monstrous deadlines, with his preparations ever more interrupted. It must be done by today. Is it ready yet? Even Odysseus managed to snatch a few days break with the lotus eaters.

Stewart Taylor’s one-act play takes us on a giddy tour of the possible routes out of our doomed state as stained, tainted beasts forever captured by deadlines beyond our control. But that reminds me – when was this review for SOURCE due in? Yesterday! But hang on, the show has only just…

They want to hear the presentation that needs delivering RIGHT NOW. “Well – er – let me just change my shirt,” he pleads. “No time…” The phone voice says.

Stewart takes us inside his furious attempts to keep up with changing objectives and timelines and we contemplate the routes out of the maze – from the transcendental to the musical, from Jesus to Buddha. We pass through irony and blatant disguise to lies and counter lies – and yes of course it’ll be ready today, this evening or even right now.

There is a deadly serious point behind the mayhem and madness of this modern target-focused world of the undeliverable presentation. Mental health problems are skyrocketing in giddy parallel to the growing wealth of the top 100 richest people in the world. You get ill as they get rich. Check the Mental Health Foundation’s latest surveys which, in part, inspired Stewart to write this piece.

That’s not just a dirty stained shirt – that’s a rabbit hole into the underworld! But maybe he could escape with the help of the audience?

Freud might have said: “sometimes a dirty stained T-shirt is just a dirty stained T-shirt”. But for Stewart Taylor’s character, it is never simply that. Despite every corporate device – and every psycho-social motivational slogan that insists that YOU CAN DO IT – he remains in a proudly dirty T-shirt. Mind you, for any blokes in the audience, stuffing it in the washing machine for 45 minutes usually works – if you have the time.

There were whoops and cheers for this pre, present or post-lockdown play. Stewart Taylor’s one-person show has given us a giddy, funny and deadly serious play.

Mike lives in Brighton. This is a full time occupation. He's also a researcher, writer and activist. Any time left over he spends hanging around cafes and pubs listening to people on their phones. He loves theatre that pokes into difficult places. You won't find him on Facebook.
← PREVIOUS POST
Save Our Venues - The Rose Hill
NEXT POST →
Africa In The Lounge - Livestreams