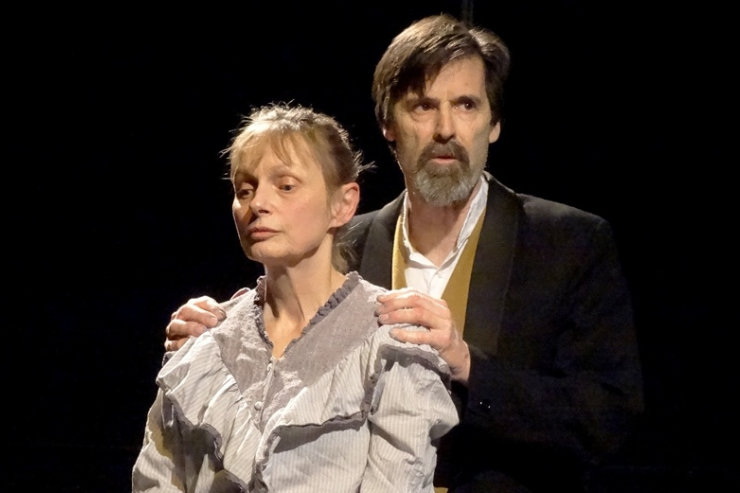 The year is 1854 and within the walls of the criminal wing of Bethlem Hospital for the Insane a bitter struggle is playing out. Talk, written and directed by Mark Wilson, was originally conceived as a radio play for BBC Radio 4 and is reimagined here for the New Venture Theatre. It charts the detailed history – the players, the means and the motives – behind the foundation of the psychotherapy movement.

Two young doctors, George Haydon (James Macauley) and Charles Hood (Matteo Bagaini), through interactions with their patients, have come to have serious doubts about the state of contemporary treatments at the hospital and throughout the country. Are the inhabitants of Bethlem to be considered patients or inmates? Is their confinement rehabilitative or punitive? The doctors’ case becomes one of modernity versus traditionalism and it looks to restore to their patients what has been denied to them for too long.

At its heart, Talk is a story about stories. In a setting where straps and buckles are seen not as callous, necessary evils but rather as a kindness it is clear that the humanity of Bethlem’s patients has been stripped away. The emotional neglect of characters such as Emily Clayton (Janice Jones) and Richard Dadd (Bill Griffiths) has lead to the suppression of self and memory, sometimes leading to violent and unmitigable outbursts or solemn, introverted retreats. That is until the prospect of change is brought to the fore by the introduction of a somewhat rogue and radical element into the hospital; empathy. “You talk to me and bring me hope”, Emily Clayton cries as this idea of talking and listening to patients, seen as perhaps a more abstract treatment in the face of the hard-line ‘science’ so ingrained in Bethlem’s staff, is here put to great effect; restoring the humanity to those who for so long have been denied compassion, culture and care. Wilson’s play cleverly gifts the most tender and profound utterances to those which society so often underserves and underestimates. It shows what is possible when emotions, sometimes alien and terrifying in their newness, are not allowed to become externalised and anthropomorphised, manifesting and all-conquering, but are spoken of and about for the sake of understanding and growing.

Wilson evidently had a clear vision for his play and his direction serves it masterfully. The stage is configured in-the-round with the audience facing inwards, peering down from raked seats as if on a boxing ring, an old operating theatre, a petri dish. The lack of set and sparseness of the space underscore this pervasive, ever-present threat of nothingness; the space lacks everything when it lacks bodies and interaction.

Throughout the play scenes ebb and flow seamlessly with sense and action bleeding from one setting to the next. Characters enter and exit the playing space like fragments of memories, no cast member allowing the momentum to slip. Once exited they sit in the stalls, mute but observative, whilst audience members around them try their hardest to ignore their presence, to deny their existence. Janice Jones gives a stunning performance as patient Emily Clayton, her frustration and grief fizz and simmer until finally allowed to boil over once she finds herself heard. Likewise Bill Griffiths is a brooding Richard Dadd, unresponsive and miserly until the root of his trauma is discovered through discussion and an unseen tenderness is at last allowed to break the topsoil.

Grounded in a pivotal moment within the history of medicine Talk rehumanises and gives life to those at the centre of years of beleaguered psychiatric discussion and debate. The writing does not allow itself to rage or sermonise. In earnestly telling its story it opens itself up to the audience and focuses attention on areas in life – trauma, loss, loneliness – where a degree of suffering can perhaps be lifted, even just slightly, if we feel we can talk.