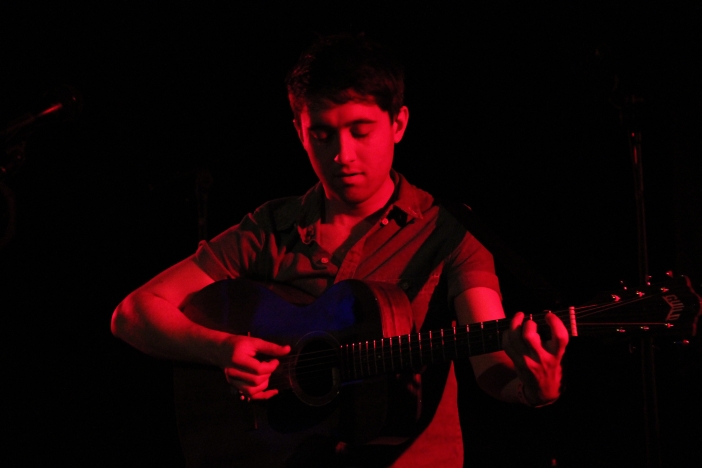 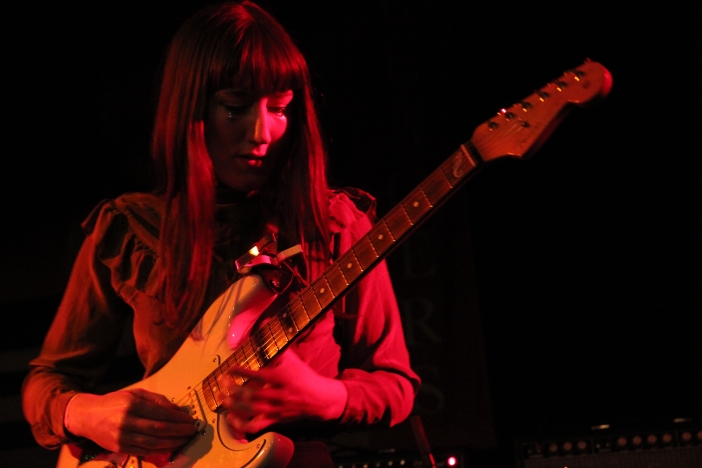 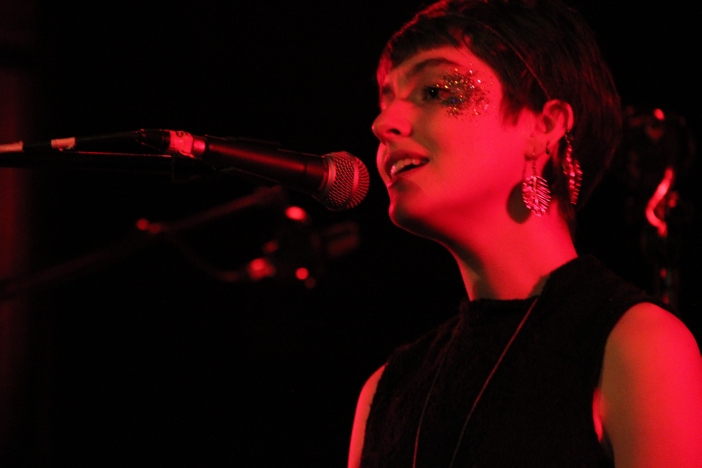 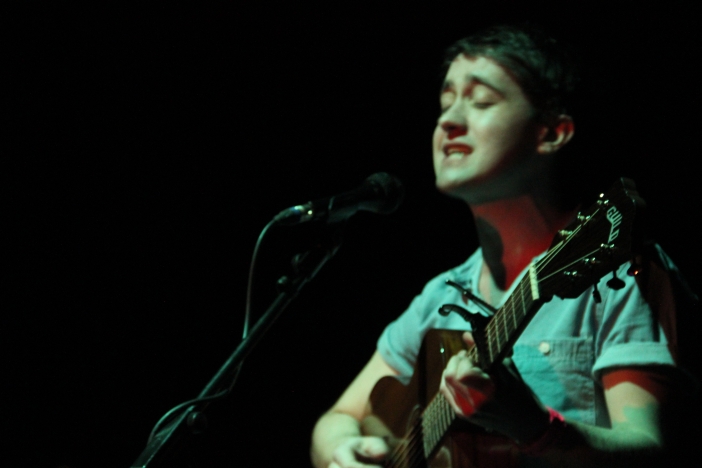 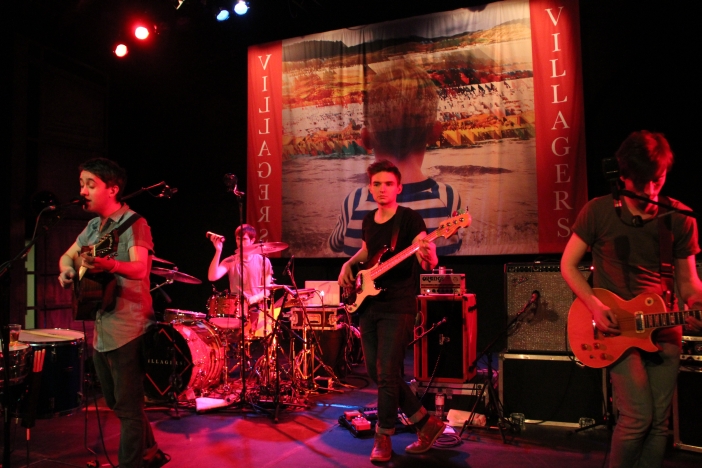 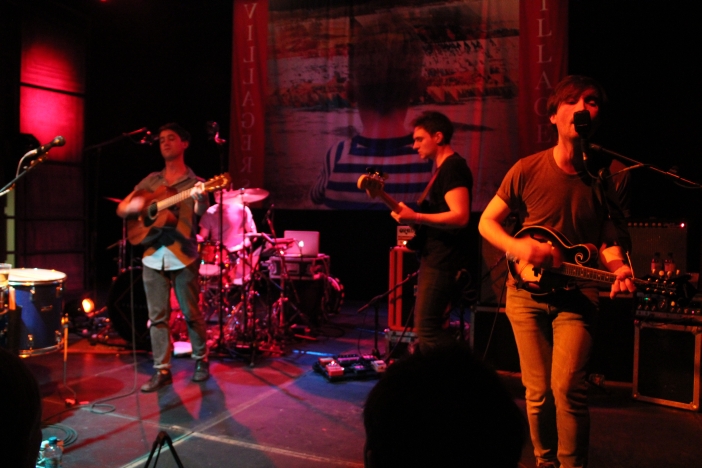 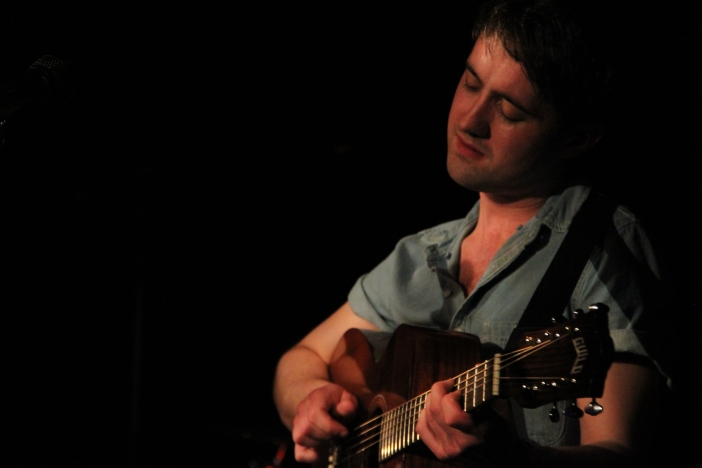 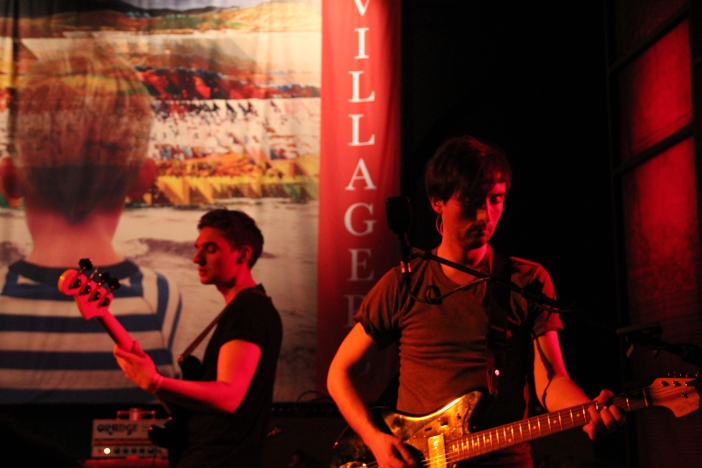 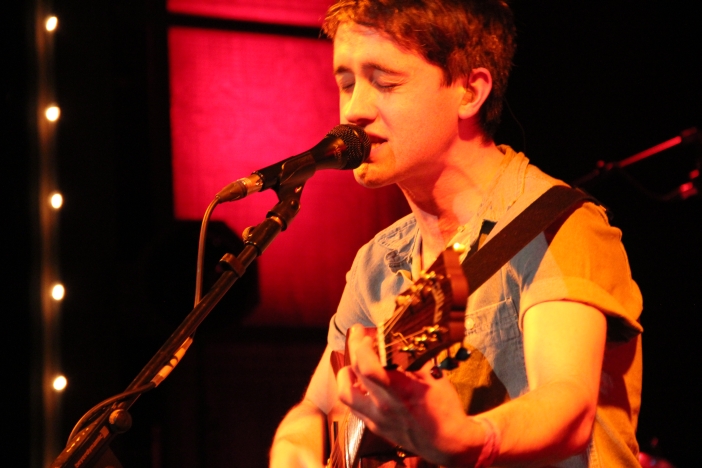 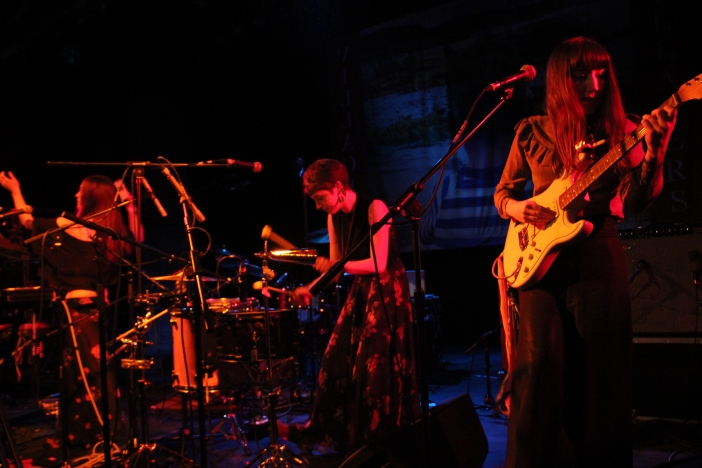 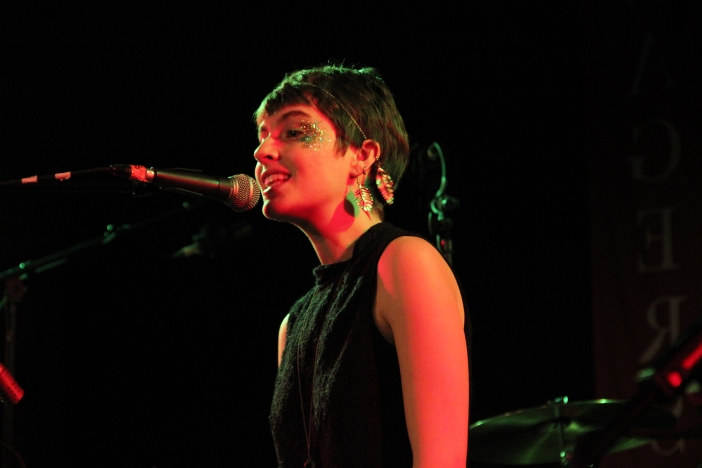 Tonight’s support, Stealing Sheep, are bathed in pink light and surrounded by a mini cage of drums, keyboards and mic stands. The glittery-eyed trio play a kind of lo-fi indie folk underpinned by the pounding of a stand-up drummer. Despite some windy lyrics, the songs sound fresh and mix shimmering guitar with rich vocal harmonies.

The Old Market is a great venue for live show. The sound is good and the room is surprisingly spacious for a sold out show. Nevertheless, we find ourselves stuck next to an extremely tall bloke who insists on whooping, talking and waving his phone around. He isn’t the only one filming clips that’ll never be watched. We’re not far from the front, but at one point we count no less six phones held aloft between us and the stage. Good people of Brighton, please help us get the SOURCE Gig Charter passed into law. Bitch over.

When Villagers’ Conor O’Brien takes to the stage he’s alone. “Can you hear me now?” he sings, striking up an understated rendition of ‘That Day’. It’s just one man with a guitar and the silence of the room reinforces the literalness of the question. On record, it’s a relatively upbeat track, but the lyrics seem to compare a couple incapable of reaching out with the futility of songwriting. If someone was to whoop right now it would be disastrous. Thankfully, everyone is on board with this strangely intense intro and Conor proceeds.

This is followed by the even gentler ‘In A Newfoundland You Are Free’. It’s an odd pair of songs to start a show with, but perhaps it’s a kind of test. When Conor calls his band on stage it’s almost as if we’ve earned his trust. They then reward us with a few more songs from their recently released second album, ‘Awayland’.

In a spate of recent interviews, Conor has confessed to feeling uncomfortable with some of the songs on the Villagers’ 2010 Mercury nominated debut. In writing the new album it seems he felt the need to take a different approach. Having written new material using synths and drum machines he then went back and worked them up as songs the band could play live. It’s an unusual digression, especially as the new stuff is well within the remit of the band’s general style. There’s the occasional electronic moment but the most noticeable change is in the diversity and bolder arrangements.

In any case, the first-album favourites like ‘Home’ and ‘Becoming A Jackal’ are given a slightly lacklustre onceover. It’s a natural enough turns of events, but it’s still a shame to hear the otherwise joyously deviant ‘The Pact’ sounding a little flat.

On the other hand, it’s hard to complain when the new songs are played with such verve. It’s here that the band finally let rip, cashing in the sustained tension with a majestic rendition of ‘The Bell’ shortly followed by the almost-anthemic ‘Nothing Arrived’. Whilst Conor’s eloquent and compact lyrics will always be the focus of any Villagers song, the other musicians are far from being a backing band.

Indeed, they find their stride towards the end of the night and deliver a performance that’s both carefully orchestrated and expansive. Song structures are stretched and broken down, giving room for the vocals and swelling again with the kind of confidence and versatility of a band like Radiohead when Radiohead were still a band.

It’s a joy to catch an act like this stretching their wings. Shame it’s not the sort of thing you can capture on ropey camera phone footage.

Ben Bailey is the editor of Brighton Source and a freelance writer. He also plays in a few bands and can sometimes be found giving talks on a variety of niche topics. He lives in Brighton and rather likes it.
← PREVIOUS POST
Artists Open Houses Preview
NEXT POST →
Nately's Whore's Kid Sister, Hope, Mon 29th April
Mailing List
Recent Posts
Website developed in Brighton by Infobo
Copyright © Brighton Source 2009-2021
Villagers Review - Brighton Source