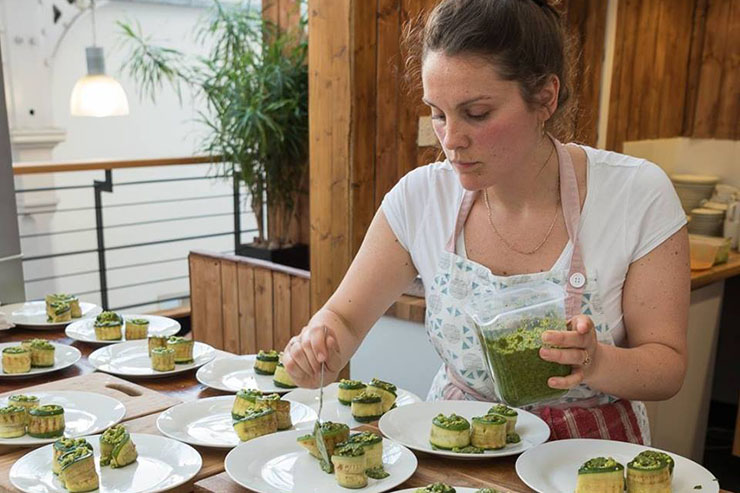 It had to be Brighton, didn’t it? It was inevitable really… that the UK’s first cannabis-infused organic, vegan restaurant would be rolled out in the nation’s most progressive city.

The Canna Kitchen throws open its doors to Duke Street’s punters on 1st December 2018. But don’t get the wrong idea… this is no “caner” kitchen. They won’t be slipping you space cakes through a hatch around the back. No, these guys are looking to shatter such outdated stereotypes (although, clearly we’re not).

The restaurant’s director is the heroically named Sam Evolution — the kind of moniker Hollywood would give a utopia-founding, Elon Musk-inspired entrepreneur. Played by Joaquin Phoenix.

And we won’t argue with Sam’s comments on cannabis’s largely under-tapped potential. “It is one of the most versatile crops in nature,” he says “with potential applications in almost every area of modern life… If utilised properly [cannabis] could begin to remedy many of the ecological challenges of our time. It also happens to be the most nutritionally complete human food source on the planet.” Example dishes include Zaa’tar Roast Cauliflower, Hemp Heart Tabbouleh, and Buckwheat and Beetroot Pancake. And diners will have the option of infusing their food with the cannabinoids CBD, CBG and CBN, which “can lead to a sense of relaxation, peace and well-being”.

As well as the restaurant, there’ll be a CBD café and dispensary upstairs, and a roof terrace for tea and smoking (of the legal kind). The basement, meanwhile, will house a “log cabin-style chillout lounge” serving organic, non-alcoholic cocktails.

Sound too good to be true? Or could Brighton be witnessing the birth of the next decade’s major food trend? We’ll let you know when we’ve checked it out in a couple of weeks’ time. We’ve got the munchies now.

Tickets are now on sale for the public launch on 1st December, where £25 will secure you three courses and a mocktail.

A magazine journalist and former BBC minion, Gaz's words can be found in publications ranging from The Radio Times Guide To Films to 1001 Songs You Must Hear Before You Die, as well as on his blog The Wine Ninjas . He plays drums in a psych band, and once fell into a frozen lake in Transylvania.
← PREVIOUS POST
The Prodigy Review
NEXT POST →
The Lewis Family Xmas, Tues 11th Dec
Mailing List
Recent Posts
Website developed in Brighton by Infobo
Copyright © Brighton Source 2009-2021
Brighton Welcomes The UK's First Cannabis-Infused Restaurant - Brighton Source