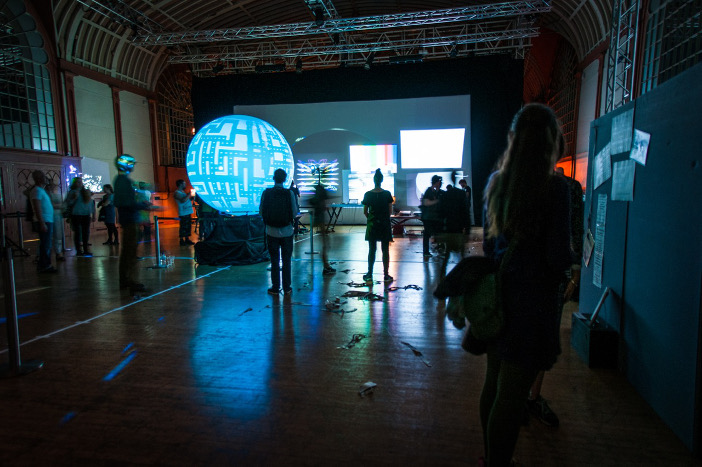 Ashleigh Ward is a very busy man. With countless collaborations, a new shop that provides free space for local artists and creatives, and numerous upcoming special events including an Alternative Christmas Light Switch-On, he took a few minutes out to tell us about this weekend’s pop-up: Bring Your Own Beamer.

Who are you and what’s your role in the event?
I’m Ashleigh and I run Pop-Up Brighton. I come up with ideas and concept for shows and get to roll them out to help get artists involved without charging them. I’m the curator and organiser for Bring Your Own Beamer in Brighton.

What’s the story behind Bring Your Own Beamer?
Bring Your Own Beamer happens all over the world; it’s a concept from a German artist called Rafaël Rozendaal. The idea is to find a space, invite artists and ask them to bring their projectors. The first BYOBbrighton was Matt Weston from Spacemakers’ idea – we worked on the project together in 2012. Since then I have carried on the show and it’s got bigger and bigger. This is one of my favourite events as it feels like a celebration of projection-based art. It really shows the variation in what artists can do with a projector – anything from using Victorian magic lanterns to 3D mapping.

This is the fourth year the event’s been held in Brighton – what can a first time attendee expect?
It’s like a wonderland in the digital age. It’s not only a place for any video artists to turn up, find a space and project, but also a place for projection-based installation artists to have time and space to build a site-specific piece. As well as this, short film artists from all over the world submit their films to be shown in Brighton Dome on a screen bigger than some cinema screens. The show brings together all the different kind of projection and film artists in a open planned space where light, colour, sound and creativity collide.

What else does Pop-Up Brighton do?
Pop-Up Brighton has about a show a month, roughly. All are free for artists to take part in. This year has been a great year and we’ve had even more varied events as well a shop we opened with somewhereto_ in the North Laine area. The shop’s called It Is What It Is and it’s free for 16-25 year olds to use, changing each week to host a different project. This has been a dream of mine and I’m so happy it has been so successful, and that customers and users have enjoyed the variety and experience.

Another major pop-up show this year was FRAMED, which is based around a map which allows people to discover artwork displayed in shop windows. Thanks to somewhereto_, this project’s gone national now. We also opened an art gallery in an airstream caravan for Fringe, and to celebrate Record Store Day we set up a pop-up record store for a week, selling local bands’ music and merchandise, with free gigs every night.

It has been a great year so far, but it’s not over yet. We’ll be putting on Alternative Christmas Light Switch-On in Brighton, for which we will be inviting artists to light up the streets of Brighton through projection. We’re also starting a spin-off of Bring Your Own Beamer in Patterns, where we’ll be hosting a monthly short film night. It’s free to take part, free to attend as always.

Jessica is an editor at SOURCE, though can be found writing up previews, features and news articles too. She's lived in Brighton for a decade and still loves it.
← PREVIOUS POST
Rag'n'Bone Man Interview
NEXT POST →
Oxjam, Sat 17th October
Mailing List
Recent Posts
Website developed in Brighton by Infobo
Copyright © Brighton Source 2009-2020
Bring Your Own Beamer - Brighton Source