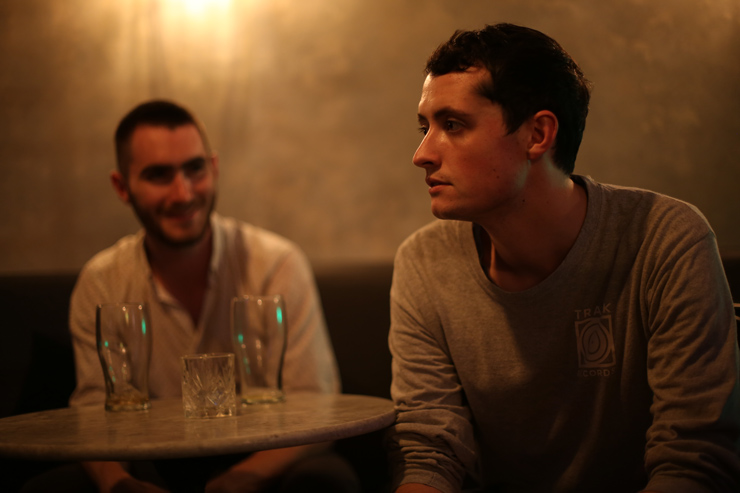 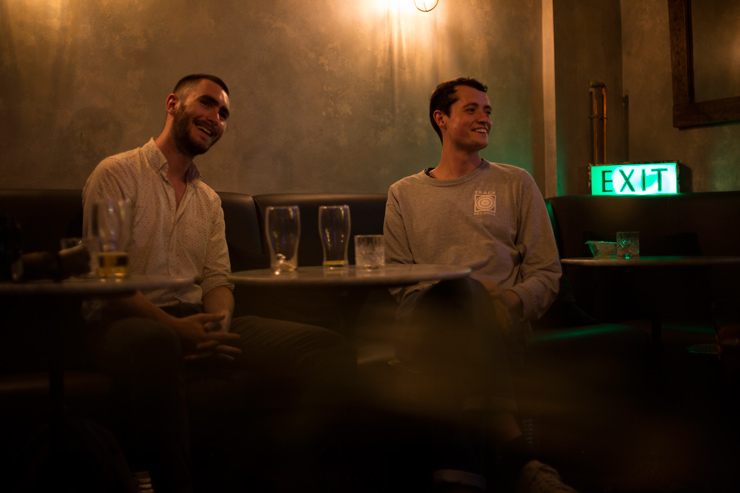 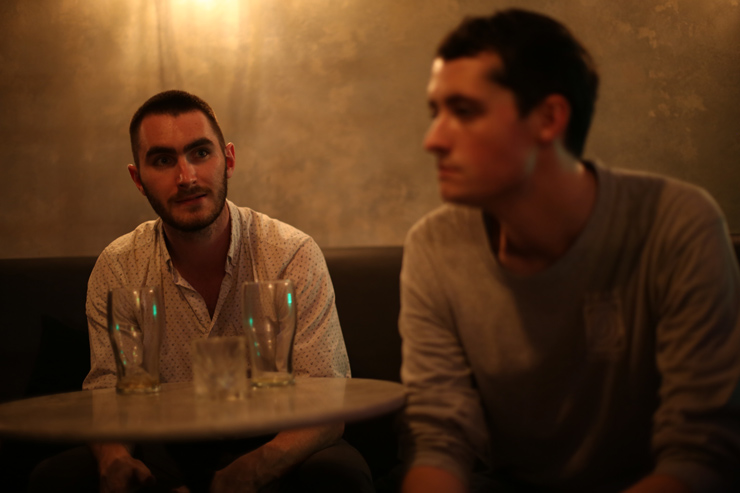 There is a vast amount of musical talent in this city, some of it homegrown; some of it arriving from outside and putting down roots here. In the latter camp are Frank & Beans, a Brighton-based ‘thunder punk’ outfit from Antrim, Northern Ireland. The two half-brothers, Tim Burns and Milo Dunn Clarke, originally came to Brighton to study at BIMM. Having already played music together for years, they honed their sound here, and are arguably now one of the most exciting new bands around.

We first encountered them in the Gladstone back in July 2018. On the TV in the front bar, Russia and Croatia were battling it out for the next leg of the World Cup. In the back room, however, Frank & Beans’ blistering set was so exciting, so compelling, that we missed the penalty shoot-out! Such is their raw energy that we were left wanting more, and a month later we caught them again – this time headlining – at the Green Door Store. We saw them a third time supporting the superb CLT DRP at Sticky Mike’s Frog Bar. And when, in June of this year at the Prince Albert, as the support for Imperial Wax – The Fall minus Mark E Smith – they blew us away once again, we knew it was time to do a SOURCE interview.

We meet in the top room of the Joker. Milo, the taller of the two, and sporting a buzzcut and beard, is the guitarist and singer. Tim, who is marginally older, is the cleancut drummer. On stage, the chemistry between them is palpable, and we start first by asking about this. Tim explains, “We’ve been playing together since we were at school. Since we were about ten years old. In my garage.” It was Tim who came to BIMM in Brighton first. Milo joined him the following year. “We were eager to keep playing,” he tells us. “We knew it would happen.”

And so it did. They now play live “a lot… maybe four gigs a month,” Tim tells us and, interrupting one another, they go on to explain how, having once taken everything offered them, they’re now in a position to be more choosy. “Before, we were waiting on an email – today, we’re turning gigs away… We’re playing more out and about than we used to. Bristol. Played Wales last weekend…”

“It’s got better,” Milo concludes, and adds with a wry smile. “We break even now.”

We talk first about the name of the band. Formerly Space Biters and Shark Week, they have finally settled on Frank & Beans. For some, it evokes the film, There’s Something About Mary. For Milo and Tim, it’s the meat-and-two-veg connotations that amused them.
“They ask us which of us is which,” Milo laughs.

We move on to the term ‘thunder punk’ that has been used about them, and we ask what it means to them. So far as they know, they explain, a journalist for the Belfast online magazine Chordblossom first coined it because they were loud, and they’re surprised – and amused – by the definition we find on the Urban Dictionary website:

“A music genre that is not like anything else. It relies on only simple parts of songs with very noisy improvisation throughout. While the music is whimsical it is generally heavy. Often the tracks are distorted. Its name comes from the thunderous sound and the punk-like attitude that can be felt in the music.”

“Sounds about right,” they both agree.

We turn to individual songs, and how they indeed encapsulate this definition. One is ‘The Moth’. With its ‘whimsical’ spoken lyric about a moth’s visit to a doctor to discuss his relationship with his wife, it is a shaggy dog story with a punchline that had us laughing out loud the first time we heard it. But no spoilers! Milo explains the ongoing ‘improvisation’ of the song. “I made a point to never write down the lyrics for it. Cos it’s a joke. It’s a different rendition every time.”

Similarly, ‘The Card Song’, is never the same twice. Live, we notice how Milo first folds a piece of A4 card and puts it behind the strings. This gives a kind of chugging tchh-tchh-tchh sound. He explains that this was was inspired by Johnny Cash. “He used to put the card in the strings and play, like a rhythm section on the guitar, and it gave a nice kind of timbre to the whole recording… And the main rhythm bit, that’s Ringo’s first riff to ‘Tomorrow Never Knows’… It’s an appreciation of Johnny Cash’s recording techniques. Plus I love that Beatles song.”

With its choppy guitar riffs, driving drums and lyrics taken wholesale from the Bukowski poem of the same name, ‘Trashmen’ is a standout track live. “It’s been in the set for six years”, Milo explains. And it has also gone through changes. He posted an old, more garage-based version on Soundcloud several years ago, back when they were the Space Biters. The more recent YouTube version is tighter, harder, and is accompanied by a video of a taxi driver singing along to some of the lyrics while behind the wheel.

“That’s my dad…” Milo tells us. “A massive Dylan-head… He’d listen to our music, and he’d be saying, you’ve got to do this; change this bit round…”

It certainly works. ‘Trashmen’ is a superb track – although they have had legal advice that Harper Collins might be none too pleased with them lifting the lyrics.

In ‘Hugo’, another crowd-pleasing track, Milo sings, “I’ve got nothing to say,” over and over. It is, they explain, about a Northern Irish DJ, Hugo Duncan – ‘the wee man of Strabane’ – famous/notorious for his radio delivery: “the type of guy that talks at the beginning and the ends of songs, ‘Diddly-dee, that’s me!’” Live, we notice that as he’s singing the words, Milo also detunes the bottom string of his guitar down to B then back again, in time with the drums. It produces an intriguing background sound. “It took a bit of practice,” he concedes. “But it kinda works.”

We ask what kind of music they listen to. Both like Parquet Courts and Suuns. And Girl Band. “I mostly listen to electronic music,” Tim expands. “J Lyn. Four Tet. Clark.” Milo has also been influenced by jazz. Lee Morgan, Marc Ribot, Julian Lage, Sonny Rollins. “The list is like endless…” he tells us. One pivotal influence is Thelonius Monk, whom he studied for a while at BIMM, and he goes on to tell us about a personal connection to the great jazz pianist. “I had a handwritten note by Thelonius Monk. And the note was ‘You got to dig it to dig it. You dig?’ It’s on my guitar, in his handwriting.”

Having absorbed so many influences, Frank & Beans are in the enviable situation of producing songs with an identifiable sound, but that – unlike some bands we shall not mention – manage to sound fresh and original with each new song. As Tim puts it, “We try to do something different. Take a different influence. Cos if you do the same every time, it’s just ‘that’ song.”

We ask them how the songs actually come about. Milo explains, “I kind of write the song, and the lyrics, and then bring it to Tim, and it changes – maybe only 5 – 10 per cent of the original idea stays…”
“The structure gets more refined,” Tim adds. “New ideas get thrown in…”

However they do it, it works well. The songs that Frank & Beans have already completed are top-notch, and the two of them are so talented, there’s clearly far more to come. We ask about a CD, and whether there might be one in the pipeline, but they both agree they’re not get ready to record an album just yet, adding “there’s no need”.

Moving on, we ask that inevitable question about the future that no-one likes but has to be asked. Where do you think you’ll be in five years time?

“We’ll be celebrating five years of the anniversary of having been asked that question,” Milo jokes.
Tim takes the question more seriously. “I can’t imagine we’ll ever stop,” he explains. “We’ve been doing it for, like, 12 years straight… It’s too late to stop now.”
Milo sums it up neatly. “It’s what we do.”

We’re extremely glad to hear it. Each time we’ve seen them, Frank & Beans have been a little bit better than the time before. And surely it can only be a matter of time before they get that so-far elusive CD together. This is a band that’s definitely going places. Their next live show in Brighton is as a part of the Through Glass Darkly II at the Electric Studios on Saturday 10th August. Catch them for yourselves and tell us we’re not right.

Paul Stewart is an author - mainly novels for kids - but his main love has always been live music. These days, the words that fill his head at gigs often turn into reviews for Brighton Source, the going-out bible for his favourite city anywhere, ever.
← PREVIOUS POST
Brighton Pride Review 2019
NEXT POST →
Doves Review