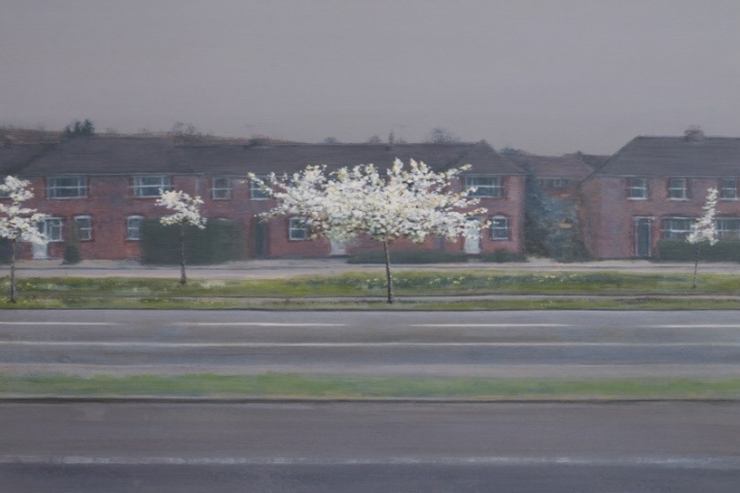 Hold Me Until The Bus Comes

Everyone loves trees. People hug them; have revered them in scriptures; plant them for shade, for their fruit and to offset their carbon footprint; the whisper of the wind in their branches and of crunching through autumn leaves are among our favourite sounds. The fact that we breathe in oxygen and breathe out carbon dioxide, while trees take in carbon dioxide and release oxygen suggests a very special relationship between us. And in the week when the 400-year-old surviving twin elm in Preston Park becomes one of 70 ancient trees in Britain to be dedicated to the Queen to mark her Platinum Jubilee, we’ve been invited to the private view of an intriguing art exhibition about the trees in our city.

Tony Felstead is the artist, a former Sussex student who graduated in the university’s first ever course in Ecology and Conservation. Passionate about environmental issues, he went on to study illustration at Brighton University, where his love of nature was transferred to canvas. Subsequently, he became a primary school teacher but, as he tells us “I have always painted, as a boy and throughout my life.” And extremely well, we are bound to report as we explore the exhibition, the emotionally arresting collection of acrylic and oil paintings that represent the culmination of four years’ hard work. 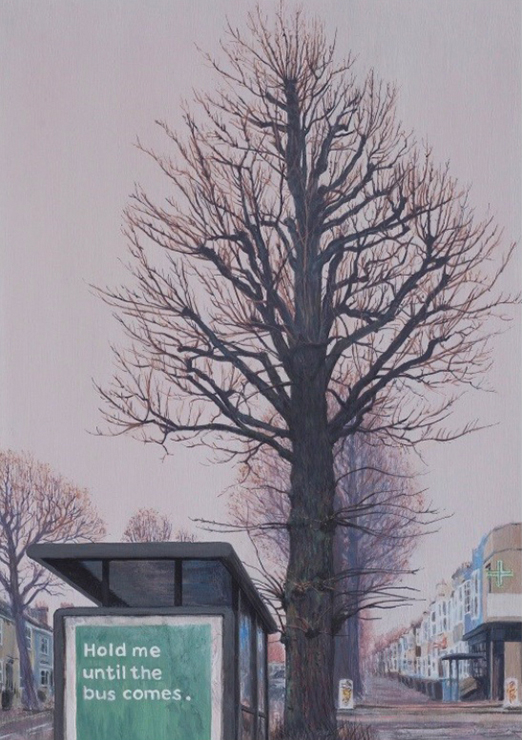 First off, we ask Tony the reason for the title of the exhibition. ‘Hold Me Until The Bus Comes.’ “It was,” he tells us, “something I overheard someone saying at the bus stop.”The bus stop in question being the one depicted in a painting of a wintry scene, with a leafless tree set against an overcast sky. The eavesdropped entreaty has been incorporated into the painting in the form of a mock advert on the side of the bus shelter. This is a repeated motif in the paintings. ‘We Don’t Understand’ shows a row of trees behind a brick wall, onto which the words have been written in white. And there are others. ‘He Shouldn’t Just Walk Away’; ‘Don’t Worry’; ‘Are You Okay?’; ‘Bonjour Sexy’; and the particularly evocative ‘I Think About You Every Day’. Blurring the line between spoken snatches of conversation and graffiti, the words illustrate a relationship between people and trees – a relationship perhaps most poignantly encapsulated in two paintings, both entitled ‘Love’.

“The smaller of the two was the very first one I painted,” Tony explains. “It kicked off the whole idea.” It is certainly striking. A central section of slightly mossy tree trunk has been spray painted in red with the word LOVE. With the parked car and shadowy building behind it, it encapsulates not only the presence of nature in our urban environment, but also the emotional response it elicits – after all, the word has been sprayed, not on the man-made objects, but on the living tree which, like love itself, will endure. “And the last painting in the project was the larger version of the same subject,” he adds. “Full circle.”

Tony has depicted the trees throughout the year – from spring, with cherry trees laden with blossom, through hot summers and yellowing autumns, to bleak winter cityscapes, where the skeletal trees are resting; waiting for the warmth of a new spring to trigger another year’s display. The timescale is grand. Year follows year, and the trees remain constant. Set against this, however, the exhibition introduces a new and exciting dimension to the process, in the form of brief, localised soundscapes, accessible to the gallery visitors through QR codes attached to most of the paintings. 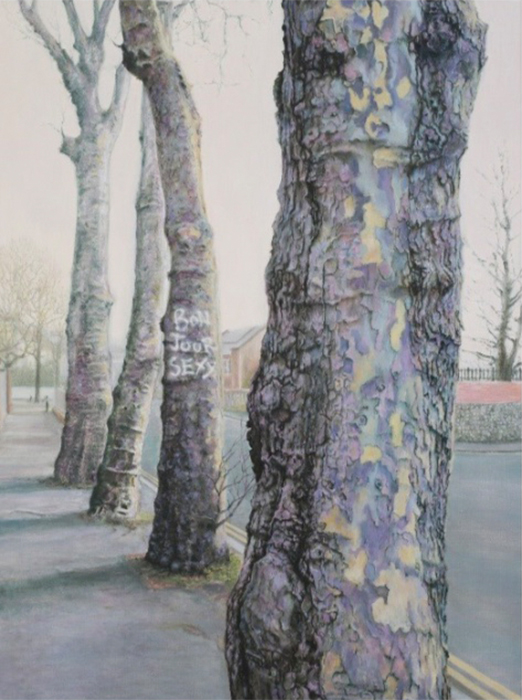 The idea, as Tony outlines, is to allow the person looking at an individual painting to experience the actual location of the tree. With the sounds in our ears, we are there with the tree we are viewing, experiencing the world almost from the tree’s perspective. The five-minute long recordings were made at different times of the day and night, and evoke the shifting rhythms of whatever part of the city the trees are growing in, be it wood, park or pavement. The result is extraordinarily moving. In one painting, the delicacy of the painted foliage is balanced by the insistence of a blackbird’s call; in another, a depiction of the colourful bark of a London plane, a full dawn chorus is in full swing; in yet another – recorded later in the day – the birdsong is all but drowned out by the roar of traffic. And then there are the voices. The snatches of conversation; whispers and cries. Moments of human emotion that have been captured, and they contrast so starkly with the longevity of the trees themselves. One notable exception that has no recording attached to it is ‘Police Line – Do Not Cross’, a painting of three felled trees that, sadly, can no longer be aware of their surroundings.

Simon Smith, a trustee of Same Sky, the local community arts charity, is the person responsible for bringing together this juxtaposition of the ancient trees with the ephemeral sounds that surround them, and we ask him how he achieved it. “Binaural recording,” he explains, “with a microphone in each ear so that I could capture exactly what I was hearing.” The idea for the concept, he went on, arose when the two friends were at an arts installation at Wakehurst Place: when Tony outlined the project he was working on, Simon suggested this extra feature. And those who buy a painting will also receive the accompanying soundscape on a USB. It was an inspired synergy of ideas, the result being the emotionally charged viewing – bookended as it is with ‘LOVE’ – that we have so enjoyed at 35 North Gallery. The exhibition runs until 25th June. Check it out for yourself, but don’t forget to take your smartphone and headphones for the full experience. 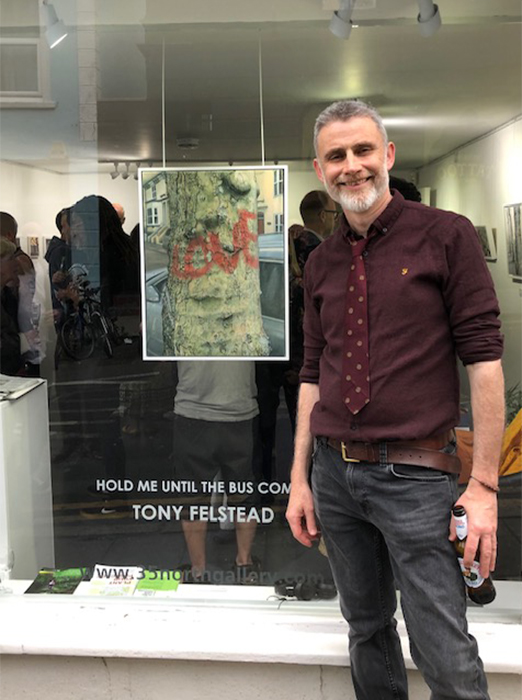 Paul Stewart is an author - mainly novels for kids - but his main love has always been live music. These days, the words that fill his head at gigs often turn into reviews for Brighton Source, the going-out bible for his favourite city anywhere, ever.
← PREVIOUS POST
Noisy Review
NEXT POST →
Jed Interview
Mailing List
Recent Posts
Website developed in Brighton by Infobo
Copyright © Brighton Source 2009-2021
Hold Me Until The Bus Comes - Brighton Source