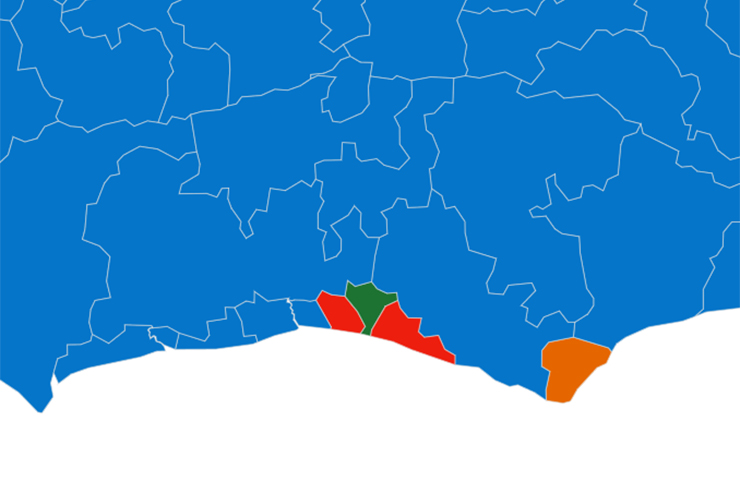 How to keep the Tories out of Brighton and Hove

Every general election seems significant at the time, but this one feels different. With so many issues at crisis point, it’s more important than ever to speak out and vote. Nowadays, the old adage that politicians are all the same sounds as quaint as the idea of a white Christmas – even without a climate emergency. There are real and substantial differences between the parties, which makes it kind of exciting, but it also means there’s a whole lot more at stake. So who are you going to vote for? And how do we make sure we keep the Tories out?

By the way, we’re starting with the assumption that a Conservative government would be a disaster. So that rules out voting for the Lib Dems (or the Brexit Party) who have said they’d be up for a coalition led by Boris Johnson. If you need convincing that this would be bad idea we suggest you spend a bit of time on this. Simply put, if you live in the middle of the city, vote Green. If you live elsewhere in Brighton and Hove, vote Labour. So, let’s start with the basics: our city is divided into three parliamentary constituencies, each of which is represented in Westminster by a single MP. Go here to find out which one you live in. We’re going to look at each of them in turn and tell you who’s worth voting for. Some of this might seem obvious to local politicos, but we’ve been hearing a lot of conversations around town and on social media that suggest some people – perhaps those new to Brighton, or even politics – might appreciate an overview. So, here’s the Brighton Source guide to the bizarre local political landscape of the 2019 General Election.

The constituency of Brighton Pavilion stretches from the seafront up to Patcham and Coldean, with a weird detour through Hanover. Despite the much-vaunted liberal vibe of modern Brighton, it’s worth remembering that prior to 1997 every election here was won by a Tory. The good news is that the Conservatives’ share of the vote has been declining since 1979. The curveball in this constituency is that the Green Party is the best bet to keep the Tories out.

When Caroline Lucas took the seat from Labour in 2010, she was the first (and currently only) Green Party candidate to be elected to parliament, and her majority has soared ever since. Long before Labour took an interest in the climate debate, Lucas was championing sustainable economic solutions at the same time as challenging the inequalities and idiocies of Tory austerity. In 2013, Lucas was arrested for taking part in an anti-fracking protest in Balcombe, but was later found not guilty (she had form in this, having been previously arrested outside the Faslane nuclear base). Clearly, this is someone who takes their politics seriously. 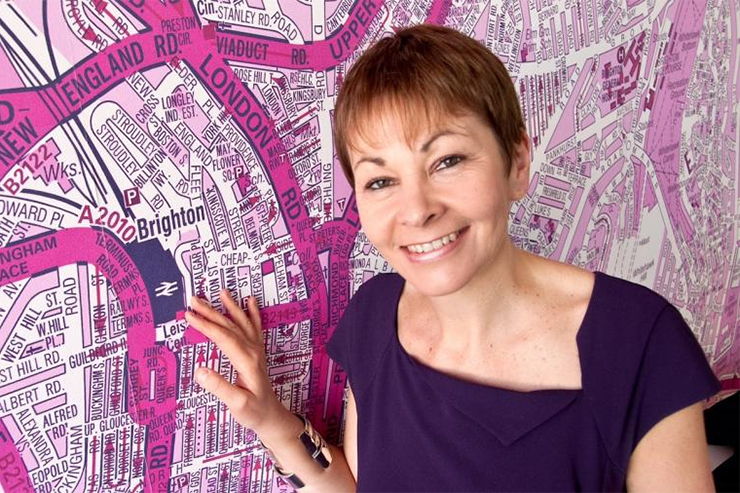 Caroline Lucas is a triple winner of The Observer Politician of the Year award, and her name continues to be spluttered by shady trolls in the comments section of The Argus website (investigate at your peril), so she must be doing something right. Locals are likely to have seen her at numerous events around Brighton, be it speaking at marches or gigs, attending launches for local projects or just hurrying to and from the train station. In short, her involvement with and commitment to her constituency makes other politicians seem unapproachable and distant.

As part of the ‘Remain Alliance’ the Lib Dems have agreed to stand down in Brighton Pavilion, as they did in 2017. Labour has maintained a solid second place, but their share of the vote last time was only half what Lucas got for the Greens. Even dyed-in-the-wool Labour veterans recognise a kindred spirit and ally in Caroline Lucas. A surge for Jeremy Corbyn’s party could potentially split the progressive vote, but the hard-earned goodwill that Lucas enjoys here means she will almost certainly keep her seat.

The constituency of Hove basically covers everything west of Dyke Road including Hangleton and most of Portslade. It used to have a reputation as a haven for old folk and the seat was a classic Conservative stronghold until it went Labour in 1997. It flipped again to Tory in 2010, perhaps having had second thoughts about shedding its fusty image, but soon bounced back. The constituency lost its bellwether status in 2015 when Labour’s Peter Kyle took the seat with a slim majority. Two years later, after establishing himself as a popular and capable MP, his lead shot up by almost 22% with a whopping 36,942 votes. The voter turnout in the area that year was the highest it’s ever been. In a different era, Hove might be considered a Labour safe seat, but we live in strange times.

Hove’s Greens came third in 2015, but attracted less than a thousand votes at the last election. Kyle’s main opponent is former Tory councillor Robert Nemeth, a property developer and beekeeper. Peter Kyle’s strong remainer credentials will probably neuter any threat posed by the Lib Dems, even against a candidate called Beatrice Bass. It’s a good name for a politician, even better for someone who used to be a professional bassist. Turns out Bass used to play bass in The Wedding Present – which, incidentally, is Stella Creasy’s favourite band. Anyway, back to politics.

Peter Kyle is gay and has recently spoken out about being dyslexic. He was active in taking Southern Rail to task (he also helped get the piano installed at Brighton Station) and tried to break the Brexit deadlock with a bill to secure a second referendum. Kyle is a centrist and has been openly critical of Jeremy Corbyn which has inevitably led some to dub him a ‘Blairite’. However, rumours that he might leave Labour and join the Independent Group (or whatever they’re called now), seem to be unfounded. Unfortunately, the story that went around about Nick Cave standing in Hove is also untrue.

Some in the local Labour party have talked about trying to deselect Kyle in favour of a left-wing candidate. Even if this was possible it would be a foolish move, given Hove’s history. Had Peter Kyle been more aligned with Corbyn it’s unlikely he would have garnered such strong local support. If you live in Hove, Peter’s your man.

This is a bit of a weird one, geographically. In addition to Kemptown the constituency includes Whitehawk, most of Moulsecoomb and all the ‘deans along the coast up to and including Peacehaven. It takes in much of Brighton’s gay community, several traditional working-class areas and some sleepy seaside suburbs. Unlike the rest of Brighton, the constituency had a Labour MP back in the 1960s, when Dennis Hobden won by a majority of just seven. Don’t let anyone tell you that your vote doesn’t count.

In 2010, the Conservative candidate Simon Kirby won in Brighton Kemptown with a small majority while Labour came second and the Greens came fourth. Exactly the same thing happened in 2015. In both elections more people voted red/green than blue. This split in the vote effectively enabled the Tories to keep the seat for seven years.

In another tactical bid to form an alliance the Green Party stepped aside in 2017 to help Labour (when UKIP caught wind of this they also withdrew their candidate in a tit-for-tat effort to improve Kirby’s chances). Even so, it was something of a surprise when the seat was won by Labour’s Lloyd Russell-Moyle by a margin of 10,000 votes. However, this time around the Greens have decided to stand again, risking a repeat of those earlier elections. 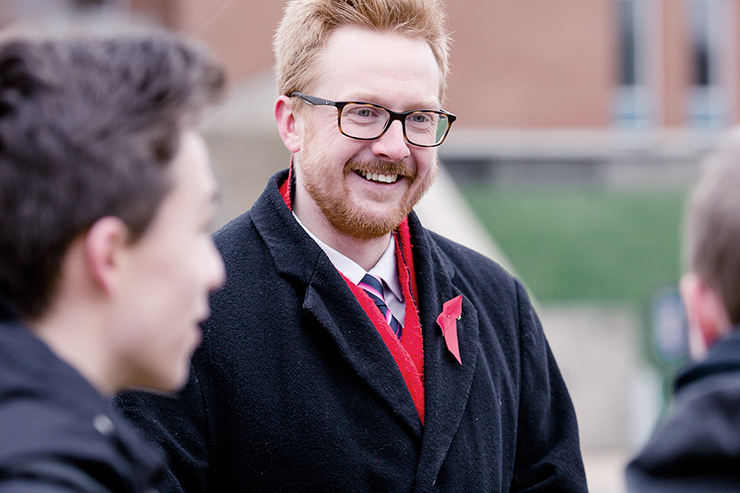 The Green candidate for Kemptown is the MEP Alexandra Phillips (not to be confused with the Brexit Party MEP of the same name). As the current Mayor of Brighton, she’s pretty well known and will probably appeal to many voters in the Kemptown end of the constituency (fans of provincial power-couple gossip will know that Phillips is married to the guy who runs the Big Lemon bus company). To make matters worse for Labour, the Brexit Party are also contesting the seat and are sure to shave off a few disaffected leave supporters. Amusingly, the Brexit Party candidate is also a bass player and can often be found dressed as a Nazi vampire in a delightfully dodgy heavy metal band called Stuka Squadron. But let’s not get sidetracked. The thing to remember is that voting Green in Kemptown could possibly result in a win for the Conservatives.

Besides, Lloyd Russell-Moyle is a bold and principled MP. You may have seen him on the news grabbing the ceremonial mace in parliament last year or watched the recent viral video in which he talks of the absurdity of billionaires in an age of austerity. He was also the first MP to announce to the House of Commons that he was HIV positive. But away from the headlines, Russell-Moyle is a strong LGBT and NHS campaigner who stands a good chance of keeping the seat for Labour. 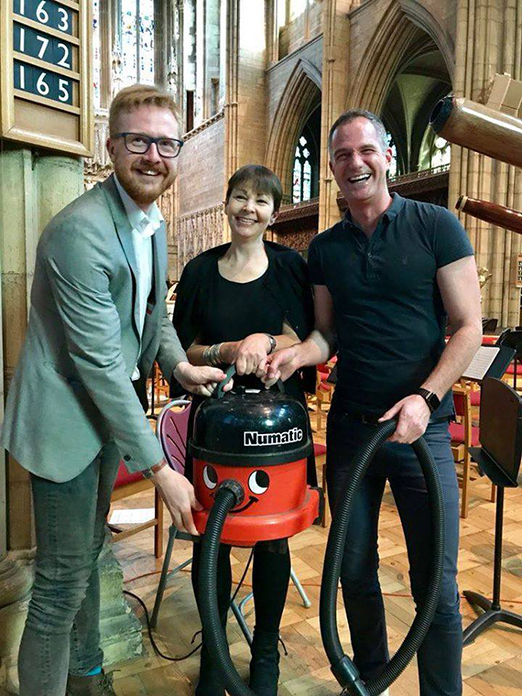 Our local MPs holding a hoover in a church, obviously.

So in all three constituencies, we’d be happy with the same result as last time – just without the nasty party in charge. You might argue that hoping for more of the same makes us Conservatives, but you’d be wrong. For once, Labour is offering an ambitious and optimistic vision for the future. Their manifesto is a serious attempt to tackle some major problems, but can it cut through the crap? It’s up to the people of Brighton and Hove to do our bit.