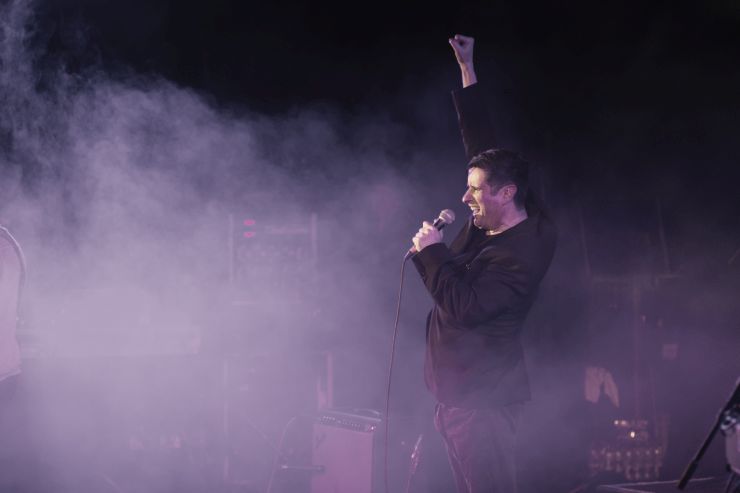 Always a band bursting with creative energy, it came as a shock when late last year it was announced they were calling it a day. After a deluge of supportive messages, they came to their senses and a new album was released in June this year. ‘Neon Primitives’ completed a trilogy of well-received releases which began with an EP ‘Brutalism Begins At Home’ early in 2017 and continued with an album ‘Funambulist We Love You’ later that year.

They always dazzle as a live band with each performance driven by the passion of frontman Johny Brown. He’s a massive Northern Soul fan and that pounding beat can be heard in many songs including the excellent ‘Isn’t That Just The Life’. They have even released a cover of Donnie Elbert’s ‘Open the Door to Your Heart’, which is a firm, live favourite.

Whatever they record or perform, it’s never less than interesting or insightful and often completely joyful with an air of vulnerability ever-present in Brown’s tremulous, passionate voice. There’s a prescient warning on the new album with Brown sermonising on ‘The Devil Has A Hold On The Land‘.

Asbo Derek are well known to local gig goers as a politically aware, tongue-in-cheek, no-fucks-given garage band but more recently they have become promoters of note with their occasional matinee sessions at the Prince Albert. Come early to hear, ‘Nails’, their biting comment on the recent deaths of 39 Vietnamese people in a lorry container and you might also get a yarn spun by drummer/raconteur Brian Blaney.

This gift of a show will fill the Twixmas dead zone with Holy Joy. See out the year at what promises to be a great indie party.

Tickets at Resident Records or here.

Steve has been a SOURCE contributor since Summer 2010. Favourite quote - "There's no such thing as a sold out gig".
← PREVIOUS POST
Yakul Review
NEXT POST →
How to keep the Tories out of Brighton and Hove
Mailing List
Recent Posts
Website developed in Brighton by Infobo
Copyright © Brighton Source 2009-2021
Band of Holy Joy, Sun 29th Dec - Brighton Source