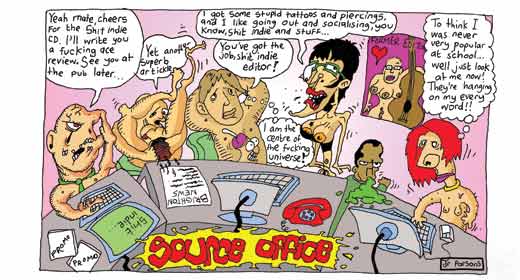 In Conversation With: Marcus O’Dair

James Kendall: There seems to be a huge affection for the SOURCE. I don’t think that it’s arrogant for us to say that because it was in place before either of us had anything to do with the magazine.

Marcus O’Dair: SOURCE has stuck in there where a lot of magazines have come and gone. I think there’s always been a kind of honesty to it – it’s not pretentious.

MOD: There was a period where it was known for gurning front covers, and that something that me and Amelia [Lawrence, commercial manager at the time] changed. My favourite cover was one we did with DJ Scotch Egg where we went to Hen Heaven, a chicken farm, and put Scotch Egg – who’d never seen a live chicken before – in the middle of seven or eight hundred birds. They were actually quite aggressive, he was screaming, “Chill chicken!”

JK: Scotch Egg was on the cover because he was from Brighton and SOURCE has only ever written about Brighton people. But I worry that the readers don’t always notice that. I think it’s really important to do that to support the community and to make us different to national magazines. It means we get to people first. The prime example of that was your Pipettes cover, for me the turning point from the first age of SOURCE into the second period of being a more proper magazine.

MOD: But one thing me and Amelia used to talk about a lot is how it’s only a local mag. We tried not to take ourselves too seriously. You can disappear up your own arse.

JK: I’ve probably taken it closer to being up it’s own arse than you guys did, because my thinking was that everything in it would have to stand up in a national magazine, even though it has local subject matter. The big difference is that there’s a danger of SOURCE not having enough bite, it being too positive about things, but when you’re faced with having 15 previews a month there’s nearly always 15 bands you want to tell people, “You should go and see this.” Rather than wasting the space slagging something off.

MOD: That’s totally the way we did it. Before my time there was a fair amount of that, and it just seemed crazy. Our idea was that you never praised something that you don’t like but you write about the things you do.

JK: With CD reviews or previews I’m conscious that if it’s the only review that people are getting – or their first review – then it’s just not fair to lay into them and rip them apart. But I don’t mind having a pop at The Kooks because a bad review in SOURCE isn’t going affect them, but a savage review of, say, Duke Raoul isn’t doing anything positive for anything other than the writer’s ego.

MOD: The other thing that makes SOURCE stand out from its competitors is that the advertising and the editorial are genuinely separate. There isn’t advertorial, you can’t buy your way in. And that’s really rare, especially in local Brighton magazines.

James Kendall was the co-owner and editor of SOURCE. He’s been a music journalist since 1992 and spent over a decade travelling the globe covering dance music for DJmag. He’s interviewed a range of subjects from Bat For Lashes, Foals and James ‘LCD Soundsystem’ Murphy to Katie Price and the Sugababes. He’s a keen photographer and has work featured in The Guardian.
← PREVIOUS POST
Club Review: Kroon Kat Lounge
NEXT POST →
Critic: Other Reviews November 2008
Mailing List
Recent Posts
Website developed in Brighton by Infobo
Copyright © Brighton Source 2009-2020
In Conversation With: Marcus O'Dair - Brighton Source