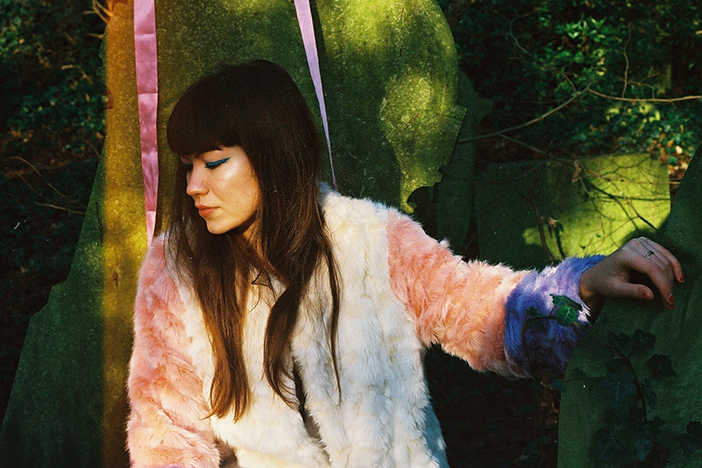 Interview with Dog in the Snow

The new Dog in the Snow single/video hits you like a missile. Over a vivid heavy riff a woman sings a powerful protest, the ultimate refusal to participate in an ungrateful world:

We spoke to its singer and songwriter Helen Ganya Brown, aka Dog in the Snow, on the eve of the release of her debut album ‘Consume Me’.

‘Child’ is well attuned to the times and we think it’s one of the best songs we’ve heard this year. We’re not alone either as it’s been picking up plays on alternative stations, including Amazing Radio and BBC South, and college radio as far afield as Australia.

The album ‘Consume Me’ was written while Brown was filling in as a touring bass player for Fear of Men on their first American tour. Of the single’s gestation, Brown says: “I was in the US in a strange mood and I thought wouldn’t it be funny if every woman decided not to have children, just ‘to show them’. Then I thought about the whole idea of having ownership of your own body and not having to make those choices.”

She remembers exactly when the idea for the album came to her: “Halfway through the tour on the West Coast in California. You are stuck in a van for weeks and you get this weird cabin fever and I had my laptop with me and a notebook and it all just sort of came together.”

Opening track ‘The Sea’ was the first track she wrote, while the band were driving down the Pacific Coast Highway, with the sea on the right and the land on the left. Its echoing chorus “Will I ever see it again, will I ever?” reflects both the experience of seeing the grandeur of the Pacific Ocean and her fear for the state of the planet and its fragile existence.

The album was recorded at home: “I came back to the UK and we had two weeks before we went away again so I just put it all together then.” It’s well-produced, reflecting Brown’s musical training – at college she studied songwriting, an experience she holds mixed feelings about: “I realised that I did not actually want to know the process of writing a song. So I had to unlearn a lot of what we were taught.”

Brown paints some persistent themes on the album – consumption, ecology, alienation – all of which are drawn from her personal history and fascinations.

Take the song ‘Blood’, about being mixed-race and growing up in an alien land (her father is from Scotland, her mother from Thailand, but most of her childhood was spent in Singapore). Blood’s lyrical riff “I think I know you” is picked up again in ‘Mirror’, a song “about being from different countries”. I think I know you, she sings, but the song suggests you never really do.

She goes on to explain how “I don’t feel fully ingrained in British culture because I wasn’t brought up in it. I understand bits but then I grew up in a country neither of my parents are from. So I have a fragmented sense of what my identity is.”

The album title song ‘Consume Me’ “reflects the idea of being consumed by everything that is happening around you, the idea of the consumerist society and feeling guilt about that, of having your comforts when everything else is not how it should be.” There’s also a line in the song ‘TV’ that talks about TV consuming your dreams, rather than you consuming what’s on TV.

The beautifully delicate ‘Face Me’ is also about that typically modern sense of alienation, about “seeing people looking at their screens and not looking at you. I wrote it in the van on tour. Everyone was looking ahead or looking at their phone or looking elsewhere. Even in this nice communal space everyone was quiet and distracted. I just turned that distraction into a song. ”

‘Child’ was actually the second track released from the album. The first ‘Magic’ is a more optimistic song “…about when you are a child and you feel anything is possible, you don’t feel restricted by any boundaries but that slowly degrades as you get older. The song ‘Magic’ is about trying to hold on to that optimism.”

“Dreaming is okay,” Brown sings, “because there is so much cynicism in the world and I find that scary at times.”

Dog in the Snow’s ‘Consume Me’ is released on Battle Worldwide Recordings on October 20th and launched in Brighton on 28th October at Wagner Hall (there’s also a London release gig on the 25th). Support at the Brighton date comes from Knightstown (the solo project of composer and songwriter Michael Aston) and Teeff (the new project from former SOURCE favourites Us Baby Bear Bones).

The future seems bright for Helen Brown. After the album launch she is support for Lost Horizons, the new band of former Cocteau Twins and Bella Union supremo Simon Raymonde, and she is also playing in Raymonde’s band when it tours the UK. Lost Horizons play Brighton’s Rialto Theatre on the 18th November. Then in January Dog in the Snow will feature at the Lewes Psych festival. “I don’t think I’m psych but it’s a pretty loose term,” she says.

Jon Southcoasting photographs all sorts, including music, writes about things, as often as not musical, and sometimes plays his own songs too. He lives in Brighton.
← PREVIOUS POST
The Mountain Goats Review
NEXT POST →
This Feeling Alive Tour Review
Mailing List
Recent Posts
Website developed in Brighton by Infobo
Copyright © Brighton Source 2009-2020
Interview with Dog in the Snow - Brighton Source