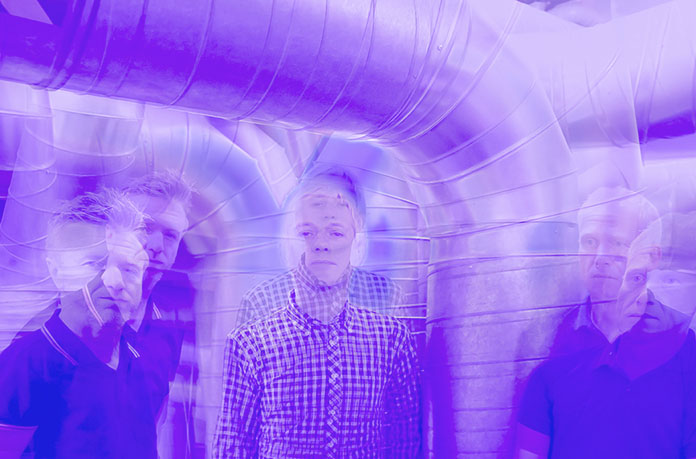 It’s always been clear cut with Loop. You’re either a total “Soundhead” (Loop obsessive) or you don’t get them at all. As you might have guessed, we fall into the former camp.

Psych, drone, cosmic; acid-rock, post-rock, space-rock… all these labels have been pinned on the band, who first coalesced in south London in 1986. Their leather jackets, drainpipes and Chelsea boots cut a uniquely crepuscular silhouette against the brutalism of their “beloved” Croydon home — and infused them with a harder edge than their indie-pop contemporaries.

And with eyes shielded from the public gaze by nests of tousled hair, their reluctance to embrace any form of rock star theatrics conjured an aura of enigmatic aloofness that only made them more appealing.

Sonically, Loop have always been surprisingly tough to define. Even singer/founder/fulcrum Robert Hampson has trouble explaining the sound. Sure, there’s a 60/70s influence, but a total disregard for trends has rendered their records as age-resistent as Dorian Gray in formaldehyde. Live, the only one-size-fits-all adjective would appear to be… loud.

The latest incarnation of the band is due to play at the Roadburn festival in the Netherlands on Friday 12th April, and they’ve pencilled in one warm-up show. At The Haunt in Brighton. Let’s face it, we’re handy for the ferry.

Robert spoke to us over the phone from his recently-adopted home in Leeds. And we thought it appropriate to ask him about the first-ever Loop gig… which happened to be in Brighton.

“Yeah we supported The Pastels at the Pavilion Theatre,” he recalls. “I don’t know if it’s still there now, but it used to be tucked in behind the Pavilion. I think it was BMX Bandits, The Pastels and Loop. We’d been around for a little while, but we were still a three-piece. I didn’t want to get into playing live instantly, I wanted to get the ideas together a bit more.”

It was an oddly twee bill to put them on, given Loop’s reputation for ferociously fuzzy noise.

“It wasn’t quite the sonic assault in those days,” continues Robert. “I mean, we were still loud, but that was before we’d asked James [Endeacott] to join, to flesh out all the guitar stuff. But it was still a bit rough round the edges.”

“It was weird because someone at that show spoke to Jeff Barrett, who now runs Heavenly Recordings, about us. He was running a label called Head at the time, and used to promote concerts up in Notting Hill. He got in contact pretty much straight away. So, by about our third or fourth gig we already had a record contract, which doesn’t happen very often.”

So why choose Brighton for this special one-off gig?

“We’re going to the Roadburn Festival [in the Netherlands] on the Friday, and in Loop tradition we always like to do a warm-up show. Sadly, we can’t really do it as Soundheads [Loop’s former alter-ego] anymore because most people don’t know who the fuck Soundheads are, haha. We were toying with the idea of doing London… but then we always do London.”

“We just wanted to do an intimate show at a nice little venue. I’ve never been to The Haunt before, but I’ve been told it’s got a decent PA, which is always very important to me, as everybody knows. The first question always is ‘can it handle us?’ Due to our chequered history of being very cruel to PA systems.”

“Also, we’ve got a long day the next day, travelling to Roadburn, and it’s not too far from Folkestone so we can get a nice early start. It’s all quite logistical, really.”

“Hopefully we’ll be doing a more extensive UK mini-tour later in the year. I’m desperate to come up North too. We haven’t played Leeds, which is now my adopted home town. And we haven’t been up to Scotland for a long time, since we did a show with Mogwai at Barrowlands.”

These are the first gigs Loop have done in a while, but Robert’s reluctant to go back to the days of heavy tour schedules.

“Loop will never be a touring concern like it was,” he says. “You can always get too much of a good thing, and I like to just do it when it feels right. It’s nice to be able to do handfuls of shows here and there and not get too jaded by it. Because slogging around in the back of a Renault van when you’re in your 50s… it’s just not fun, haha. It’s a privilege to still be able to do it, but we’re not in our 20s anymore and priorities change.”

“We had a supposedly luxury coach on the last tour [in 1991], in the previous incarnation of Loop, but it was one of the worst winters in a long time and it was just a fucking nightmare. Like sleeping in a coffin every night. The driver was a miserable bastard, who wouldn’t turn the heating on.”

Possibly thanks to that miserable bastard bus driver, Loop split in 1991, but reformed in 2013 to headline the All Tomorrow’s Parties festival. Robert has reshuffled the line-up since then, hopefully into a more settled state.

“Yeah, we’ve got Wayne [Maskell] and Hugo [Morgan] from The Heads on drums and bass, and also Dan [Boyd] on guitar, who’s lived in Brighton for a long time — so he’s happy to be playing his home town. I’m very happy with the line-up. It works. On all levels. It’s a shame that people come and go, but sometimes it’s just not meant to be.”

The first new material in over 20 years emerged in 2015, with the ‘Array 1’ EP. The four tracks adhered to the classic Loop template, but also contained a hefty degree of abstraction. Has Robert found that the more minimal, ambient sound of his solo projects is bleeding into Loop?

“I still treat them very separately,” he maintains. “Being the main protagonist and songwriter, of course I’ve very much got my own signature. And there were elements of abstraction in Loop anyway, in some of the more studio-based experiments there was more minimalism. But my raison d’être is to make records that people want to sit down and listen to, rather than have on in the background, whether it’s solo or Loop.”

“Spending huge amounts of time doing my stuff outside of Loop has developed me as an artist, and also it’s helped me develop my use of the studio as a tool and an instrument. And that’s bound to creep back into the music, whatever I’m doing.”

Alas, most of his old effects pedals have bitten the dust.

“Pretty much everything from back in the day was gotten rid of, barring my holy grail fuzz pedal. Fortunately, technology has helped me reproduce this stuff and I’m really good friends with David Main, who makes the DAM pedals. He blames me, in part, for getting into making fuzz pedals. So I’m privileged to count him as a friend, and he makes me custom pedals. He certainly reproduced, to an infinite point, some of the older ones, which wouldn’t stand up to touring anymore. Also, I’ve had too many people try to nick ‘em and I’m fed up with that.”

“Well, we’re all a lot older. Let’s face it, the majority of the Loop audience aren’t under 30. I don’t mind… it’d be great if younger people were coming along but… gig-going isn’t quite as robust as it used to be — there are rules and regulations now. Everything has to be finished by 10.30pm, the curfews get earlier and earlier, because virtually everywhere you play has some fucking club on afterwards and they’re more interested in that.”

“No, it doesn’t seem as lively as it used to, but it’s hard for me to comment because I don’t go to many gigs anymore, and 80 per cent of those are sit-down gigs anyway. It’s so expensive these days. I try to keep our merchandise as cheap as possible, to give people value for money.”

“Promoters want a cut of your merch money, and venues take 10-20% for doing nothing. I find it disgraceful. I don’t know if it’s just the punk rock spirit in me, but I won’t tolerate it. And I know some bands are beginning to rebel. I think, in Kentish Town recently, Thee Oh Sees set up their merch stall in the Bull & Gate [the pub up the road] to get around it.”

Loop get classified as a psychedelic band, and recent years have seen a resurgence in psychedelia. Not just the music though. Microdosing LSD has supposedly become a creativity-booster in Silicon Valley, while clinical trials in the therapeutic uses of ‘classical’ psychedelic drugs have been given research grants at institutions like Imperial College London and Johns Hopkins University in the States. Is this a topic that still interests Robert?

“Terrence McKenna and people like that were talking about this stuff for years. How microdosing can help with depression and PTSD, and also alcohol problems. But it could lead to problems in itself. I’d never stop anyone taking psychedelics — I’m a strong advocate of stuff like that — but I don’t personally indulge in it and haven’t done for many years. You have to be careful with stuff like that. No medicine is good for everybody.”

“All those natural remedies will always have a resurgence now and again. And since the 60s it’s been considered to be extremely dangerous, but people were taking massive doses back then and didn’t really know what they were doing, so of course there are going to be casualties — people taking it way too far and losing their minds. Indigenous tribes, or people doing it in a controlled environment or for spiritual reasons, that’s very different than necking five blotters in a club.”

It’s interesting to hear him use the S word there. But despite its hypnotic, even meditative, quality, Robert doesn’t class Loop’s music as ‘spiritual’.

“I would never class us as trying to tap into that. But repetitive music is often intrinsically linked with a trance-like state, which can lead to certain spiritual elements. Maybe our music does somehow tap into that occasionally. But as I’ve said right from the word go, you don’t need drugs to listen to our music.”

A magazine journalist and former BBC minion, Gaz's words can be found in publications ranging from The Radio Times Guide To Films to 1001 Songs You Must Hear Before You Die, as well as on his blog The Wine Ninjas . He plays drums in a psych band, and once fell into a frozen lake in Transylvania.
← PREVIOUS POST
Violence Review
NEXT POST →
Art Brut Review
Mailing List
Recent Posts
Website developed in Brighton by Infobo
Copyright © Brighton Source 2009-2020
Interview: Robert Hampson of Loop - Brighton Source