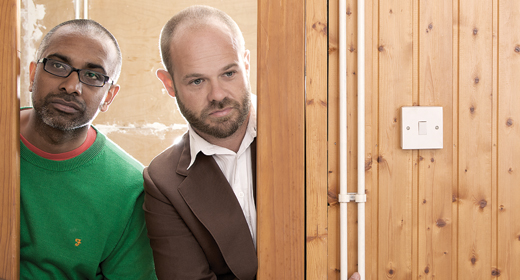 There are many, many good things about Brighton, but not that a lot that are truly world class. Beyond scratch DJs, sex shops and sitting on the sofa smoking weed, Brighton does jazz-tipped breakbeat at least as good as anyone else on the planet. Admittedly that’s mostly the work of two men, Tru Thoughts’ ears Rob Luis and mouth Paul Jonas. With a roster that over the last decade has included SOURCE cover stars Quantic, Bonobo, Alice Russell, TM Juke and many more, it’s a label with international success. A few years ago it even won the converted Record Label of the Year in Gilles Peterson’s Radio 1 Worldwide awards. Fans from outside of their peers include John Peel, Laurent Garnier and LTJ Bukem, while their respect in their scene has given them friends around the world.

The pair’s meeting very much set the tone for what has happened since. A little over a decade ago Paul Jonas was outside the old Concorde having flyers thrust at him by feisty young promoters. He’d heard Rob Luis DJing and was impressed enough to want to meet him. One of the flyers looked like it might be one of Rob’s nights so Paul said “Are you Rob Luis? You’re amazing.” To his surprise the flyerer shook his head and pointed to the corner, where Rob was, “cowering, flyering really sheepishly.”
“I just said, ‘Give me your flyers, I’ll do them,'” says Paul of the moment that would define their relationship. “Rob wasn’t really that comfortable in that environment and I am. That was the thing with the clubs we went on to promote together, Rob would entertain them. My thing was to get the people into that room. It’s the same with the label ever since, Rob finds the music and then I do the rest, promoting it and getting it out there. That’s it, that’s the understanding we have. I’ve been happy not being an A&R man, I trust Rob’s ear. The partnership’s worked really well.”
“I think that’s a big thing for me, having someone who trusts,” adds the softly spoken Rob. “I’ll sometimes say to Paul I want to sign this, it’s a bit weird. You need that balance, especially with the music business the way it is today. You can’t be just all about the music, you have to make sure you’re getting out there and telling people what’s going on.”

Perhaps the key artist for Tru Thoughts has been Quantic, a hugely prolific artist who has been with the label for almost the whole of the ten years, across a variety of projects and styles, most recently as Quantic & His Combo Bárbaro, a band handpicked from the best South American legends.
“He was really young when he signed to us,” says Rob. “He’d been sending demos to a few labels and people wanted to send it in other directions, whereas I didn’t ask him to change anything. He’s got quite a free rein, whatever ideas he comes up with we’ll give it a shot unless it’s too crazy. If he wants to do two albums a year we can do it.”
“We have a 50/50 partnership deal with the artists and we’re really supportive of what they want to do,” says label manager Paul. “Quantic, Nostalgia 77 and Lance from the Bamboos, they’ve all gone in a different direction. They’ve had options with lots of other labels but stayed with us. As Quantic has changed he’s seen us change and develop alongside him.”

But isn’t all plain sailing. For a variety of reasons several of the label’s key artists have upped sticks for other labels. Bonobo was the label’s breakthrough artist – his emotional, chilled out beats caught the ear of Ninja Tune and he left to huge success. Alice Russell too, after many years, moved on. Despite the fact that the artists were also friends Rob and Paul merely shrug at the memory.
“With anything creative people just have to make their own journeys,” says Rob. “For Bonobo, at the time it was really good for us, we still had the rights to the first album and we licensed to Ninja Tune for America, there were lots of business things like that which really helped the label. With Alice it was sad but she wanted to do her own thing and had her own ideas. We do like them as friends and like their music – if they were to pick up the phone and want to come back we’d have them back straight away.”

So what’s next? Can a small label survive in these times of fuzzy copyright attitudes and the quick grab internet?
“We started when the digital age was already in place, we’ve always been in that realm,” Rob says. “As we were growing we noticed other labels still following their old system and struggling with it, spending lots on promo PR and pluggers.”
“It would be nice if we could sell 100,000 albums and get nicer offices, employ more people,” Paul ponders. “We can’t compete with a major who’s selling half a million – we couldn’t afford to manufacture, market and do all that needs to be done. But we can carry on signing people who are quite popular but maybe sell half of what someone on a major because they’re on an indie they make twice as much money, and that allows us to do what we do.”

Doing what they do seems to have worked well for the first 10 years. We’ll check in on the 20th birthday and see how it’s going then.

Sometimes an article is a bit of a team effort, and those are tagged SOURCE Writers. If you’d like to be part of that team, hit the Contact link at the top and get your work on this website.
← PREVIOUS POST
Alex Murray, Unsung Hero No.3
NEXT POST →
Club Review: Poundance
Mailing List
Recent Posts
Website developed in Brighton by Infobo
Copyright © Brighton Source 2009-2021
Interview: Tru Thoughts - Brighton Source