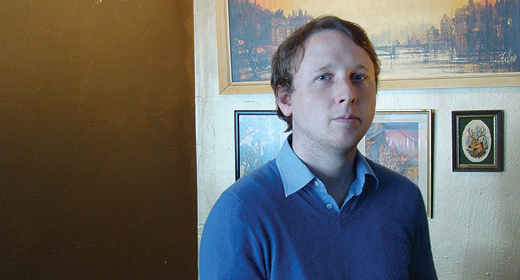 Few people are as supportive of local bands as the One Inch Badge label boss. In fact he’s even taken over The Freebutt to get it back on track.

When you set up One Inch Badge Records what did you want to achieve?
My ambition was solely to release a 7inch single for one of my all-time favourite local bands, My Device. With the success of the first single behind us the label quickly snowballed as we dug deeper into the local scene and found a whole host of amazing bands who just weren’t getting the support and recognition they deserved. Since our first release OIB Records have put out records by numerous local bands including Pope Joan, Lonely Ghosts, Sons of Noel and Adrian, and the Tumbledown Estate.

What’s been your proudest OIB moment?
While we’re still very supportive of our local scene, we have branched out recently to start working with some international artists and last year we released a soundtrack EP for one of my all-time favourite artists, Casiotone For The Painfully Alone. To have Casiotone approach us to release his records was an absolute dream come true.
In terms of the shows we put on we’ve got an upcoming gig at the Concorde on November 1st with Daniel Johnston and Laura Marling.

What’s your role at the Freebutt, how will the venue change now you’re co-owner?
When I was growing up the Freebutt was such an important space for Brighton, it felt more like a family home for aspiring musicians than simply another gig venue. Unfortunately through a number of bad business decisions the venue really lost its way over the past few years, however with a similar ethos to that behind the label we’re attempting to rebuild the Freebutt as not only a space for both national and international touring bands but as a hub once again for our local scene.

Could OIB happen anywhere outside of Brighton?
Brighton is absolutely crucial to the output of OIB, for me there’s no better scene in the UK. There are just so many amazing bands coming out right now such as Curly Hair, Drum Eyes, Nullifier, Jane Bartholomew, Jacob’s Stories, Cold Pumas.
Todd Jordan from My Device recently told me this story of a walk down London Road where he saw some street artists performing an impromptu show, as he stayed and watched an elderly dishevelled gentleman walked past shouting “OIB, OIB”. Todd politely turned to enquire what “OIB” meant to which he replied “only in Brighton!” – whether he meant this with a positive or negative connotation wasn’t apparent.

“Alex is a champion of the true underground, but not for the sake of indie cred. His revamp of the Freebutt looks like the work of someone who cares, and rescuing a Brighton institution from dereliction deserves a badge. Maybe a two inch one even.” Meatbreak, Not For Resale

Sometimes an article is a bit of a team effort, and those are tagged SOURCE Writers. If you’d like to be part of that team, hit the Contact link at the top and get your work on this website.
← PREVIOUS POST
White Night Festival
NEXT POST →
Interview: Tru Thoughts
Mailing List
Recent Posts
Website developed in Brighton by Infobo
Copyright © Brighton Source 2009-2020
Alex Murray, Unsung Hero No.3 - Brighton Source