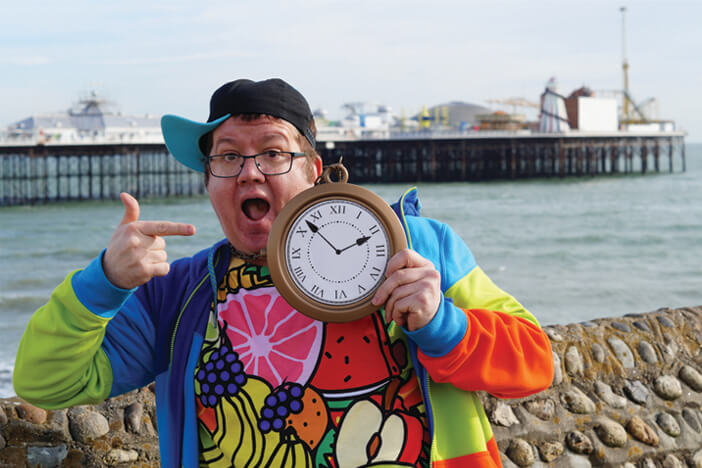 Could Mister Adam be Brighton’s next big YouTuber? To be honest, we’d never heard of him either until he started pestering us with emails. Brighton has more than its fair share of famous vloggers, but maybe what YouTube needs right now is an eccentric local history enthusiast with a garish hoodie and a head full of trivia.

If you’re after bitesize chunks of Brighton history, you might even like what he’s doing. His second series of FACT ME UP is out now, so we agreed to run this piece about him on the condition that he never again clogs up our inbox.

Who are you and why do you keep emailing us?
Well, duh! I’m Mister Adam, the latest and greatest YouTube superstar. I film, edit, present, produce, direct, research, audio and key grip ‘FACT ME UP’, the most popular and successful weekly YouTubes on the history of Brighton & Hove. I’m astonished that you haven’t heard of me, frankly. Astonished and a bit disgusted. Wise up SOURCE. I am the zeitgoose.

Well, we’ve heard of you now. So that’s good. But what do you actually do?
I appreciate that it’s difficult for someone from the MSM (Mature Seniors Media) to understand, but these days young persons get their information through putting plugs into every orifice. All their news and entertainment is inserted direct from the source, not from you – from us YouTube superstars. Now, I could just do what other YTS do; show off my yachts, mansions, Ouzo 9mm guns, designer pants, expensive cats and so forth in my videos. For various reasons that sort of thing isn’t possible right now, so instead I’m doing educationalist videos about the history of Brighton and (where absolutely necessary) Hove. What’s not to like about that? You don’t get the likes of Zoella or Septicjack telling you what shops on North Street used to be a post office.

So you’re basically an amateur local historian? Is that what ‘the kids’ go for these days?
Totals. I’m almost surprised myself at just how popular my channel is with the young folk. Here’s one small example: I did the first bit of filming for Series 2 of FACT ME UP on the seafront recently. When I watched the footage back in the edit, I saw a steady procession of school age kids – a dozen or more – passing by behind me, waving two fingers at the camera and laughing. The fact they clearly knew the second series was underway, and were demonstrating their happiness about it in this way, was really humbling for Mister Adam.

Go on then, impress us with a local fact…
Brighton is home to the deepest hand-dug well in the world. Located alongside the Nuffield Hospital, the Woodingdean Well took four years of round-the-clock digging to create some 160 years ago. It’s two and a half i360 towers deep (almost 400 metres).

Not bad. Got any others?
Did you know that Brighton has the longest running public electricity supply in the world? Or that the world’s first colour movie was an eight-minute short about life in Brighton in 1908? Bizarrely, that film is still in copyright, but only in the UK (until 2030) so foreign-based YouTube superstars can show it on their channels, but I can’t. It’s a disgrace – don’t YouTube know who I am?

It would seem not. How many subscribers have you got?
Mister Adam’s army of subscribers is now 68 strong. I read somewhere that Poopeepie (a Swedish guy who lives in Brighton and films himself swearing at video games) is the most popular YouTuber in the world. I looked up his channel page and it says ‘Subscribers: 62’ so surely that means I’ve overtaken him? There is an M after the 62 though, and one of his fans reckons that stands for million (not members, like I thought) but surely that can’t be right? There aren’t even that many computers in the world! So I can’t say for certain whether I’m the numero uno YouTube superstar worldwide at the moment, but I must be in the top three or four.

Sure. What made you decide to become a YouTuber anyway?
I have a background in top quality journalism and the writing and producing of television things. Using those skills I did a long running weekly blog series for my army of Facebook friends, in which I posted fascinating facts I’d tracked down about Brighton & Hove. Loads of people told me I should turn it into a YouTube show… Well, two people told me that and it later turned out one of them was joking, but there you go… I bought a cheap camcorder and the rest is (Brighton and YouTube) history!

Since you’re still here, do you want to share any interesting historical facts from your own past?
I co-wrote David Walliams’ first comedy show (a video games series on Sky) which he loved so much he has never mentioned it to anyone since; I put together the first online guide to every pub in Brighton; I spent fifteen years running the Brighton office of the top (actually, only) local children’s TV animation company; I edit and publish the UK’s longest running (actually, only) roller derby magazine; and I was in a band that Hollywood star Martin Freeman called ‘the greatest pop group in the world’ although he may have been a schoolchild and lying. Given all of my previous huge media successes, I hope no one begrudges me my current YouTube stardom. Least of all SOURCE.

Where do you get your facts from? Do you do actual research?
Absolutely do I do research. That doesn’t just mean cutting and pasting from Wikipedia either, although to be fair that is about 95% of it. I have a huge collection of books – both electronic and real – that I either own or have stolen from the library. I have over a dozen 19th century postal directories of Brighton, for instance, and if that doesn’t make you jealous nothing will. I do web research and talk to old people at bus stops too. I’m the best at research. The best.

You might as well tell us about your new series. What aspects of Brighton history will you be sharing with the world?
The first couple of episodes focus on Brighton’s Chocolate Cream Poisoner, Christiana Edmunds, and other shows will look at local follies, madcap MPs off of history, stuff on the South Downs, music, sport and more. There’s something for everybody. Particularly those interested in a narrow band of parochial local history from 1840 to 1923.

What makes you think it’s important for YouTube to know about this stuff?
Because the rest of it is just people making fart gags whilst playing Player Unknown’s Battlegrounds, and at least with Mister Adam videos you can pretend you’ve learned something.

So if we publish this ‘interview’ will you promise to leave us alone?
Absolutely, as long as you tell all your readers (even the emo ones) to visit www.factmeup.com for a top quality new episode every Friday afternoon.

It’s a deal.
Mister Adam thanks you. 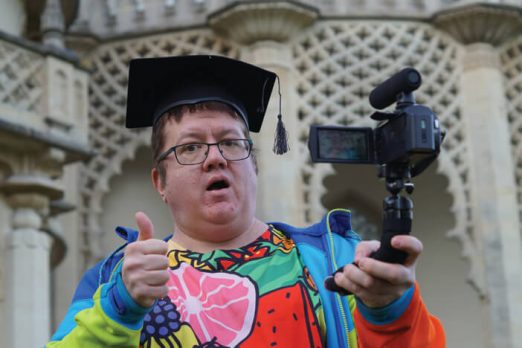 Ben Bailey is the editor of Brighton Source and a freelance writer. He also plays in a few bands and can sometimes be found giving talks on a variety of niche topics. He lives in Brighton and rather likes it.
← PREVIOUS POST
Record Store Day 2018 Review
NEXT POST →
Afriquoi Review
Mailing List
Recent Posts
Website developed in Brighton by Infobo
Copyright © Brighton Source 2009-2021
Is This Guy The Next Brighton YouTube Star? - Brighton Source