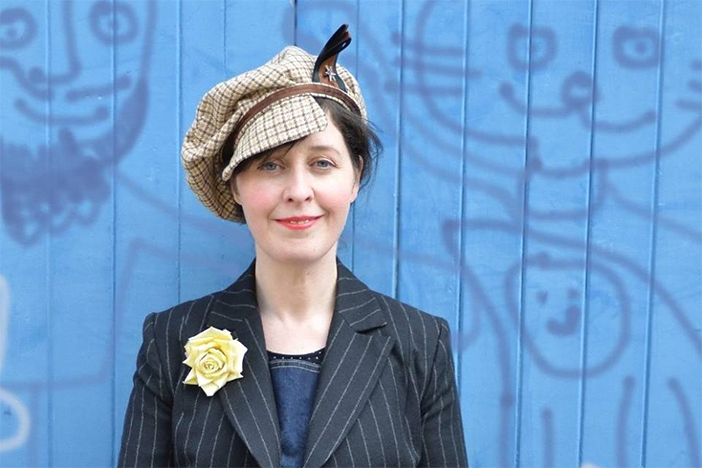 Joanna Neary is a local comedian, television actress and possibly a frustrated performance artist. She recently spoofed Laurie Anderson in a hilarious music video timed for Brighton Festival, and also did a run of dates in the Fringe. She’s back in town this month with another new show at The Old Market, where her cunningly silly skits, daft dances and finely-honed character comedy are packaged in the format of a village hall talent contest. Despite the setting, this isn’t quaint old-time comedy – as we found out during our chat.

How would you describe your new show Faceful Of Issues?
It’s a character comedy chat show, hosted by ordinary housewife Celia Jesson. Celia started life as a Brief Encounter parody but since I’ve given her her own show and been touring with it, people tell me they know women just like her. Apparently her double lives in Goring. Celia is very nice, like a lovely friend’s mum. To act as a foil for that, I’ve given her a working class Northern musician to accompany her on tour, played by excellent musician Pad Mclean (who used to be in Tragic Roundabout). So it’s ended up being a cross between The Vicar Of Dibley and Viz.

What is the Toxborough Village Hall Chat Show?
It’s what would happen in any village hall around the country if they decided to put on a local talent show, quiz night and fundraiser and then everyone dropped out. The only person left brave enough to go through with it is Celia. The chat show is a fundraiser for the animal hospital, they’ve a kitten who needs an iron lung. Celia does an acting demonstration, Craft Corner, How To Get To Talk, ‘I Got It At A Jumble’ show and tell as well as songs and anecdotes and of course, interviews.

When did you start doing the Celia character? Who is she?
I started with her in 1997 when the local Brighton radio station asked if I could do an impression of her for an advert for the princely sum of £10. Of course I said I could, because I needed £10. Luckily, I was able to do the accent pretty quickly and wrote my first monologue for her, based on Brief Encounter but in 3 minutes instead of the length of a film.

Where does Celia end and Joanna begin? Is there a part of you that would prefer to live in her world?
Stewart Lee saw my show and he said “it’s basically you, isn’t it? And it works”. It is pretty much me but I’m much ruder than her. That’s why I got a musician into the show (Centre Partin Martin) so I could give him my rude lines.

Is it unusual to do character comedy in a stand-up format? Do people ever get the wrong end of the stick?
Not really, they only get confused if I start off with my nervous sex toys woman and they think I’m genuinely that nervous. But as soon as the jokes get going, they realise it’s a character. I like playing with that, playing on the nervous woman thing, when I’m not really nervous. And also I like letting the audience fill in the gaps. I don’t like to spoon feed my audience. As you will see if you see my shows, they tend to be quite surreal. I put that down to my performance art background!

What inspired you to spoof Laurie Anderson? Are you a fan?
I am a huge fan of Laurie Anderson, I love her. The parody is made with love. I couldn’t really do her beautiful voice justice but it was fun to try. My favourite thing about that video was the cameraman who kept saying “I don’t know what you’re trying to do”. Which is why you can see me openly laughing at 2:00.

What have been your favourite television roles?
Ideal with out a doubt, that show was incredible. Watching it now, I can’t believe the stellar cast and how every single line was a corker. Graham Duff is a wonderful artist and writer. Also, Katy Brand’s Big Ass Show. I got to be Sadie Frost, covered in postules, and actually did a sketch with Kate Moss and Sadie for Comic Relief. Katy wrote brilliantly for women, it was a joy.

Are you doing Edinburgh this year?
Yes, I’m doing Edinburgh with a stand-up show with characters in it. It’s going to be at The Stand, my favourite venue in the world (after Komedia). Edinburgh is vast and all my friends go. And because we’re all away from home, we hang out and do as many shows as possible. Whereas living in or near Brighton for 25 years, I tend to concentrate on my shows and don’t get to see other people’s so much. Which is a shame and I’ve tried to readdress that this year.

Any other projects in the pipeline?
My Edinburgh show is taking up all my time, plus live gigs. But I am developing ideas for radio and TV. Fingers crossed, eh?

What was the last thing that made you properly laugh out loud?
Victoria Wood. I watched her Christmas Special a month before she died and god it was wonderful. I haven’t watched her since she passed, I can’t bear it yet.

Ben Bailey is the editor of Brighton Source and a freelance writer. He also plays in a few bands and can sometimes be found giving talks on a variety of niche topics. He lives in Brighton and rather likes it.
← PREVIOUS POST
Naked Bike Ride 2016
NEXT POST →
Cate Le Bon Review
Mailing List
Recent Posts
Website developed in Brighton by Infobo
Copyright © Brighton Source 2009-2021
Joanna Neary Interview - Brighton Source