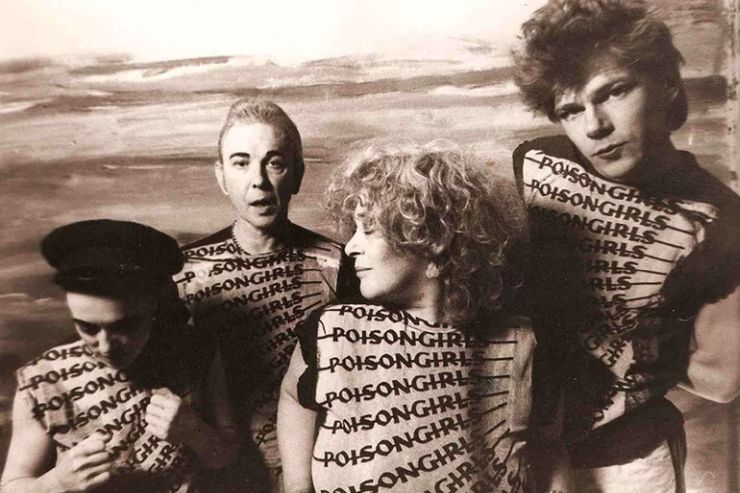 Poison Girls
(1976-1995)
Formed by the 41-year-old Vi Subversa (Frances Sokolov) in 1976, Poison Girls became inextricably linked with Crass and the anarcho-punk movement of the late 70s and early 80s. Their first single was a split 12″ EP with Fatal Microbes (whose line-up included her teenage son and daughter). Vi was instrumental in setting up rehearsal space and gig opportunities and became a mentor to the young punks who gravitated to the North Street church and legendary Vault venue. They moved to Burleigh House in Essex in 1977, then Leytonstone in 1980, notching up over 500 gigs of which nearly a fifth were with Crass and most were benefit shows. There was a reunion concert at London Astoria in 1995 and things came full circle when Vi, then 80 years old and living in Hove, played a triumphant final gig at the Green Door Store.

Where are they now? (With thanks to Pete Fender)
Vi Subversa died in February 2016, a couple of months after the final performance. Lance D’Boyle aka Gary Robins became an artist in Spain before his death aged 76 in January 2017. Richard ‘Famous’ Swales is currently living a quiet life as a crofter in Shetland and Sue ‘Bella Donna’ Cooper is now the treasurer of Greenpeace.

Steve has been a SOURCE contributor since Summer 2010. Favourite quote - "There's no such thing as a sold out gig".
← PREVIOUS POST
Macbeth Review
NEXT POST →
Save Our Venues - The Rose Hill
Mailing List
Recent Posts
Website developed in Brighton by Infobo
Copyright © Brighton Source 2009-2021
Lost & Found: Poison Girls - Brighton Source