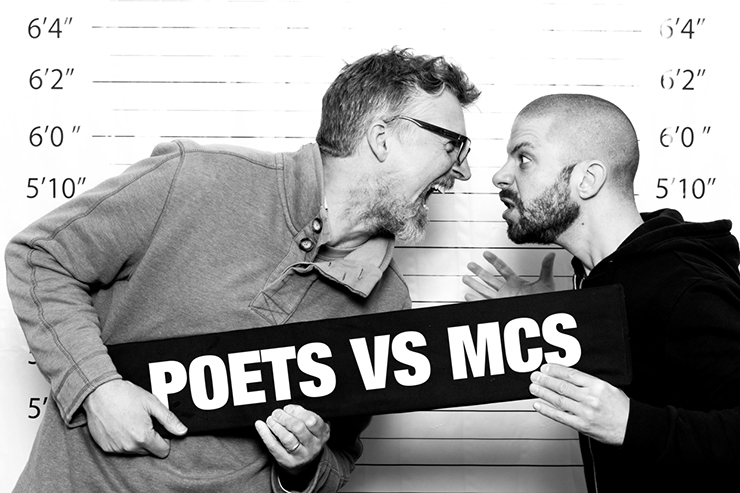 After 16 years, the crew behind Brighton’s legendary annual spoken word battle have decided to call it a day – but not without staging one final confrontation. Some of the city’s best rappers and poets will muster at the Concorde in January to decide the matter once and for all. Which is best: poetry or rap?

At least that’s the theory. In reality, a truce seems more likely. SOURCE met up with team captains Mike Parker and Jon Clark to find out why they’re calling time on the long-running war of words, and why they might at last have found a common cause.

It sells out every year, so why stop now?

JC: It’s built up into a frenzy of activity that probably works better with the sense that it’s gonna come to a close. I think if any good story keeps getting eked out it loses its power.

MP: For me, there’s a definite sense of that energy being eked away. Gramski decided he was done a year or so ago and Rosy decided she’d had enough last year. If Rosy was going to step down then possibly Tom Hines was as well. And it’s difficult to summon up that battle energy. I know the last two times I’ve performed it’s been 90% niceness from me. There’s nothing I particularly disrespect about these guys rapping, at least nothing that makes me want to tear them apart. We all like each other too much!

JC: It’s a narrative that has run for a while. And it’s almost like the people who were there at the start knew what the original joke was and could understand how to attack each other. And I don’t want to have to explain that to people who are coming up. To tie them into this ancient legacy that they were never part of in the first place, seems a bit hierarchical.

MP: I had hoped that Poets Vs MCs would be a sustainable thing and that as we olders dropped out there would be another generation of people coming in to take our place. And to a certain extent there is, but the next lot don’t seem to have the same bite. So perhaps our mission is complete. Perhaps we’ve built this respect between rap and poetry – to the point where there doesn’t need to be that battle anymore.

JC: Take EbenFlo, for example. You could honestly book him for either type of show and he would destroy it, because he’s perfectly down the middle. He almost has no sense of being a poet or an MC, he’s both. And he carries both convincingly, without any hesitation or moving between roles.

MP: And I’ve stolen him for the poets this year!

Have younger performers been keen to get involved?

MP: We both work with young performers. And a really important part of the last few years has been the young people from AudioActive stepping up in the cipher. That opportunity, that space, when you might be 14 or 15 years old, that’s quite a special part of the evening. I think there are lots of people actually growing up with both cultures. You know, poets not having much animosity towards rappers. And that’s even a false statement there, that’s me imposing my idea of there being poets and rappers, as different things.

JC: This is where the future is. Right now, it feels with the death of SlipJam… It got shut down after someone from out of town came and started a fight. It felt like people saw it as a bit of a risk, promoting a night like that where you never knew what would happen. But there still events, at the Rose Hill for instance, where lots of young people are getting up and freestyling. People who are living the turbulence, you know, who are in the middle of the quicksand of this town, and fighting it daily and still working out their way in the world. Sometimes that’s where the most ferocious art is coming from, and where some of the realest stuff is. People can sometimes become more objectifying of their own lives the more intellectual that they get, and they can stand outside of their experience and pick it apart surgically. But this is raw expression coming from a life-form undergoing tribulation, or something that they haven’t got their head around. That’s what I hear from the young people. It’s a raw reaction to what they’re going through. And that’s where the next wave is coming from. 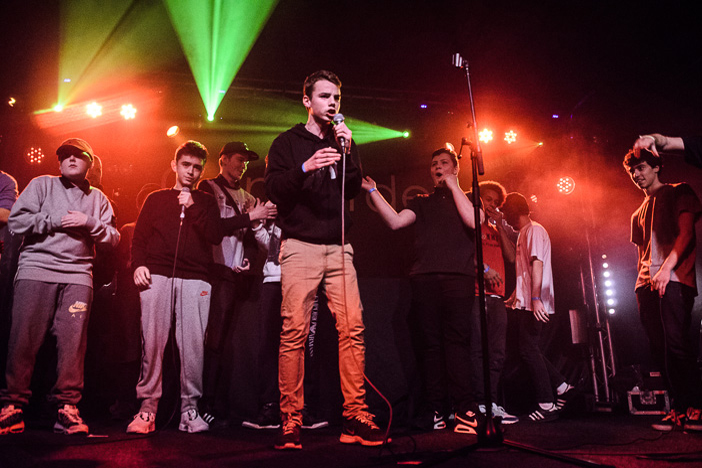 Does it feel like Poets Vs MCs still has that sense of risk?

JC: Yes, we’ve been very conscious to keep that solid. And it’s because I want to honour that sort of energy that I would want to leave it as it is.

MP: That’s something we think about each year, how’s it going to be more powerful and more risky this time? A couple of years ago that risk turned all aggy; last year it challenged us to do something a little bit different. When the idea came up that this would be the last one, I thought no! But yeah! I was suddenly excited by the idea and realised that ending it would again up that level of risk. We’ll draw out our final roar because we want to take them down for good. Whoever wins this one is the dominant art-form forever! The others will have to retire…

JC: Each time the event rolls around I realise that the amazing event we put on last year has suddenly become old news. I have to dissociate myself from the perception of the status quo, because now we have to create a new one. In fact, we have to crown the new one in such a way as to make the last one look terrible. It has to be redefined each time, which is cool, and I’m always up for that, but to put a close on it like this means I can call upon all the old gods and put them on that stage together, you know.

MP: I think there are people who come thinking, okay, what’s Rosy going to come back with this time? Is Rick going to have the last word? If we were a band we’re at the point, after 16 years, where the audience start demanding the old tunes. Play the hits! Yeah, but we’re doing new things… Yeah, but we just wanna hear the hits! So in a way it’s us breaking up the band… haha, so we can go on to our solo projects.

Are you still going to do the one-off shows in Brighton Fringe?

MP: Yeah, that’s the caveat. We’ll still be taking on teams of poets and rappers from other cities. Poets Vs MCs is now a team together, and it’s a strong team. And we’ve been at the forefront of this thing that has emerged out of Brighton, while other places are only really cottoning on. It’s been taken up in Bristol, and there’s been a couple in London. We’ve invited a team to come down from Sheffield or Newcastle on May 5th at The Old Market. We can bring in a crowd of two or three hundred in May, because people love us, because we’re brilliant.

JC: When we’re fighting other places, that’s when you really start to see whether they have a sense of community or a sense of solidarity behind the idea. It feels like that’s where the fire is, visiting these others places, as a group. It’s like you’re being acknowledged as a collective, and that you represent your city. And they’re proud of where they come from too, but there’s an honour in being there together in that capacity, in that competition, in that conversation between places. And it really comes across because there’s so much depth in the expressions. You can really hear someone’s city in their poetry and their rhyming.

MP: I really believe that our lot are the best. In the world! Just looking at the MCs – Jon and Gramski and Tom – there are no better rappers. Their freestyling skills are astonishing and they’ve actually got something to say, not just the swirling round and round in self-referential shit that you get with so much rap culture. I believe in our rappers.

So the competitiveness and bragging is still there… it’s just directed at other places now?

MP: Yeah! If you’re gonna step into a competition, you’ve got to believe you’re the best. We need to show the rest of the world how good the stuff coming out of Brighton is. So yeah, I feel the fire for showing other places, other cities, how damn good we are.

JC: There’s real talent and variety in the poet camp as well. The team that they’ve got is full of unknown quantities, these behemoths of humour and cleverness. Take Chris Parkinson and AP Staunton, for example. If you send them away to another town, they don’t know what’s hit them! I love having to battle against AP’s dryness, and his slooow delivery, which always leads to the inevitable conclusion of pain. Or Chris Parkinson’s flagrant lies.

MP: Everything he says is the truth… just in poetic form.

JC: I’ve seen people look a bit worried about Chris Parkinson when he first starts speaking, and then they realise that they’re being roasted – but only when it’s too late.

So who’s going to win the final battle?

JC: I feel like sometimes the poets don’t even know when they’re beaten!

MP: This man is a mighty general. And I have to be utterly aware that he’s got things planned for us. I know with Jon as captain the rappers are going to raise the bar again. And I am a little bit scared. Complacency can sink in sometimes with some of the poets. But because I’m a little bit scared, I’m going to make sure we’re raising our game as well. There is genius in the poet team, my job is make sure they’re on that genius and to make sure you can see it on stage. I reckon we can do that.

Are there any special surprises in store for the finale?

MP: But we’re not going to tell you.

JC: People often think we all meet up in advance and have an itinerary for the way these battles are going to happen. Because there are so many serendipities that take place on that stage, people in the crowd think it’s fixed. Never! Everything that you see on there is pure competition. People are trying to win. If they knew what we were gonna do, that would destroy the whole point of it. It’s a ferocious contest!

Ben Bailey is the editor of Brighton Source and a freelance writer. He also plays in a few bands and can sometimes be found giving talks on a variety of niche topics. He lives in Brighton and rather likes it.
← PREVIOUS POST
Jacob Collier, Mon 18th Feb
NEXT POST →
Four Top Brighton Albums From 2018
Mailing List
Recent Posts
Website developed in Brighton by Infobo
Copyright © Brighton Source 2009-2020
Poets Vs MCs Plan Final Showdown - Brighton Source