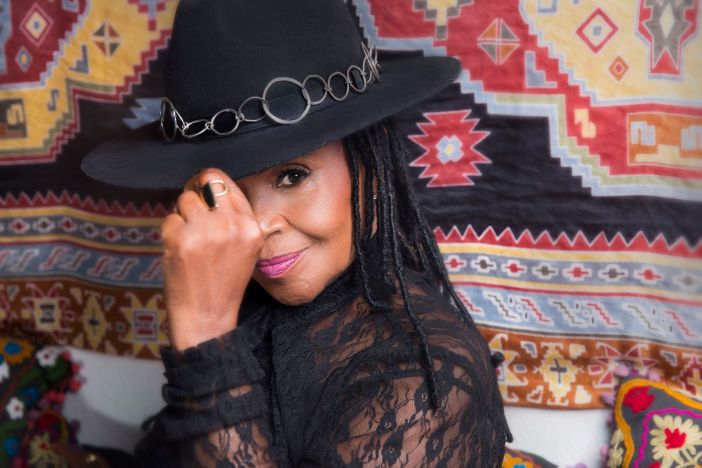 She became an Ikette to escape an abusive marriage, decamped to London and became a 1960s soul sensation. We were lucky enough to grab PP Arnold for a quick chat ahead of her main stage appearance at this year’s Love Supreme festival.

Your arrival in the UK sounds like a pitch for a 60s movie musical. Touring backing singer arrives in London, instantly meets all the key people on the scene and becomes a huge star – was it that simple?
Well, you know, it was kinda like that but nothing’s ever easy in the music industry, there’s always a lot of politics and stuff. I came over with Ike & Tina Turner, we went on tour with The Rolling Stones and at the end of the tour Mick Jagger and Andrew Loog Oldham invited me to stay in the UK and sign to the Immediate record label – which I did and it took a while to sort everything out as I knew nothing about the record industry and the politics involved. I knew nothing. I never even planned to be with Ike and Tina, let alone become a solo artist.

So, you stayed on in London on your first visit?
Yeah, I stayed in London and signed to the Immediate record label and, being in the right place at the right time, Cat Stevens wrote ‘The First Cut Is The Deepest’ and gave it to me.

Was it written specifically for you?
No, it was just a song that was just suited to me, my life experience really.

With the Immediate label, was it a close-knit family of artists?
It was a close-knit family. We were trying to create a Motown with artists, production, songwriters – the whole kinda production scene like that, so it was. The Small Faces and so many, many other artists.

You famously had many collaborations with Steve Marriott.
With The Small Faces, yeah and I also did some stuff with Rod Stewart as well but that was never released properly. It’s been released, and people know about it on the Northern Soul scene.

Were there real money troubles at the time? Was it hard to get paid?
Oh yeah, I think everyone got ripped off in the 60s, didn’t they? As far as I know. I certainly did. I never got royalties on any of my work from the 60s until the 90s. And then you never got everything, you only got paid from the 90s. I never got paid for the 60s and 70s.

You knew and collaborated Steve Marriott from early Small Faces days through Humble Pie to his final solo album (two years before he died). Did you remain close throughout those 25 years?
I met Steve in 1966, Immediate was short-lived, as were many things in the 60s, and ended in ’68 so the work that we did together was all between ’67 and ’68. I also worked with Steve later on the Humble Pie stuff and later in life when he recorded solo and with Packet Of Three.

And this continued until his final album.
I worked with Steve and I knew him right up to the time he passed away, very tragically.

Who were your musical inspirations when you were starting out?
I’d always loved music. I grew up in a family of gospel singers so gospel music was my initial love and then growing up as a teenager in the 60s, I liked all the great pop, Motown and Stax, plus all the Rock ‘n’ Roll songs from the 50s but I also grew up listening to the Blues. As young kids we used to call it the ‘old folks music’, then I found out a lot about the Blues that I didn’t know when I got to England and that the bands all had a love of the old black artists.

You appeared at a festival in Madrid with Ronnie Spector last week.
I did, it was lovely. I don’t know her as I was just a young kid when she was in The Ronettes. She and Tina are both older than me, I was just a young girl but it took me back to my teenage years, as everybody loved The Ronettes and I got to meet her and we took some photos together, which was really nice.

I know we’re running short of time but can you tell me about The Turning Tide album?
This was great. We recorded it in the late 60s/early 70s, after Immediate folded. I was without a musical home then I met Barry (Gibb) who was a fan of my version of ‘To Love Somebody’. The Bee Gees had split up so he wanted to do some recordings so we went into the studio.

Did he have any part in remastering or mixing the reissue?
Oh no. I got the license after fifty years and I had a few people helping me: Jon Moon and Jeff Allen from Sensible Music first started helping me mix and then Paul Weller, who was very instrumental in the final mixes.

There’s a lot of Gospel influence on the album, such as ‘Bury Me Down By The River’.
Absolutely. Barry was very interested in me as an artist, and my roots, so I recorded those songs originally before The Bee Gees did. I think I was very instrumental in inspiring those songs.

Have you ever worked with your son Kodzo?
Absolutely. I have two songs that are on the new album that Steve Cradock is producing, ‘Hold Onto Your Dreams’ and ‘I Believe’, and Kodzo produced those originally when he was sixteen years old, so he cut his music production teeth working with his Mama and I would love to work with him again but I can’t afford him. He’s out working with all these big artists and he’s got to feed my grandbabies so I’ve got to let him do his thing. I’d love to work with him because he’s just the best Musical Director, I think, out there. Anybody who knows him says it’s an honour to work with him. He’s in Australia right now with Jess Glynne.

Have you finished writing your autobiography?
It’s finished and it’s coming out next Spring. It was supposed to come out last year but the publishing situation didn’t work out so it’s coming out real soon.

I know you’ve got to go now so thank you so much and have a great set.
You’re welcome. Thank you.

Unfortunately the interview was cut short as PP had to prepare for her set, but she will be back in Brighton with Geno Washington at the Concorde 2 on Sunday 26th August.