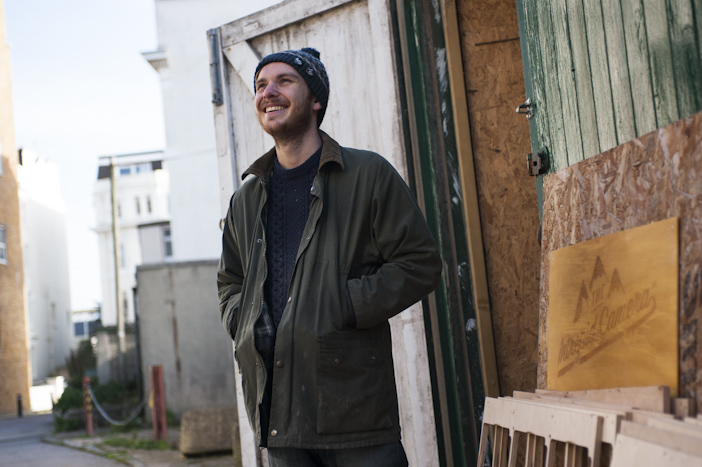 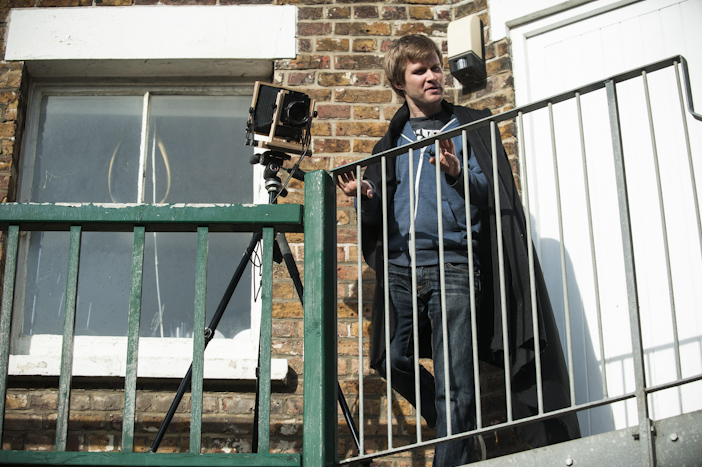 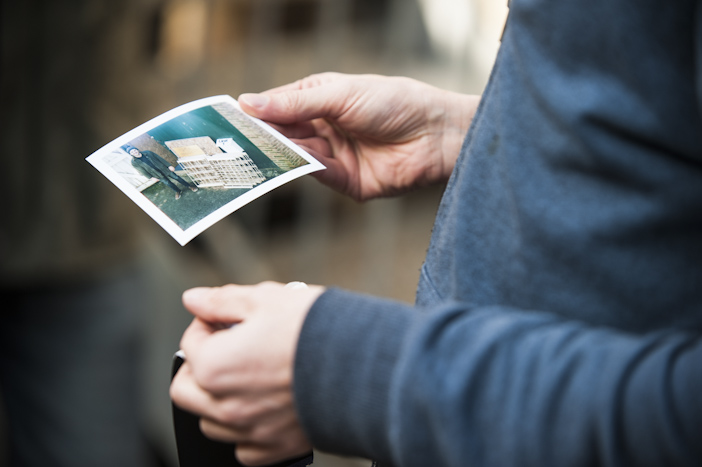 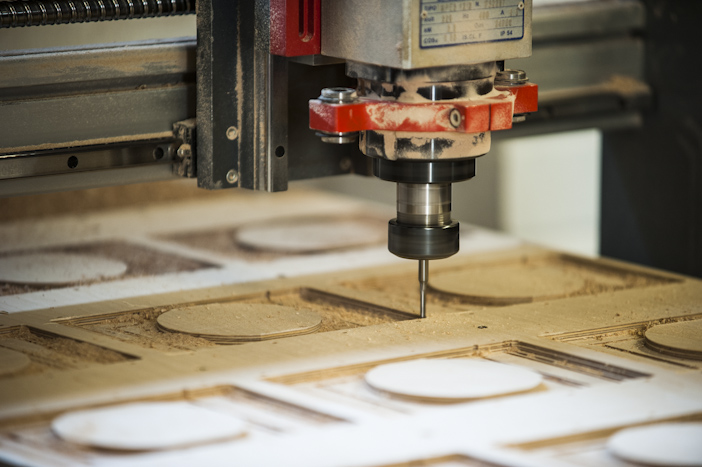 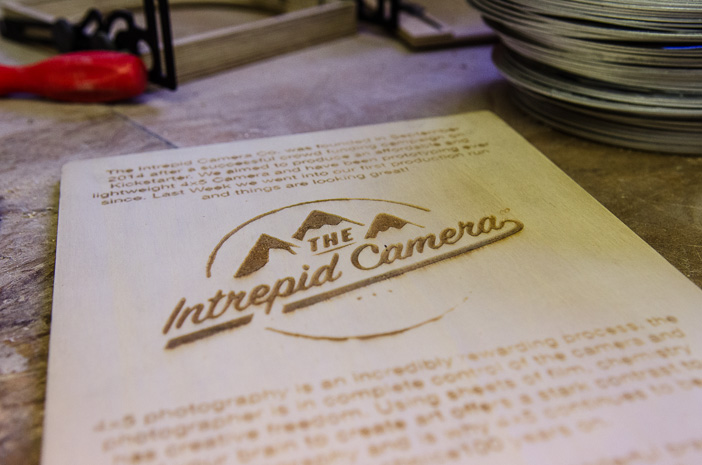 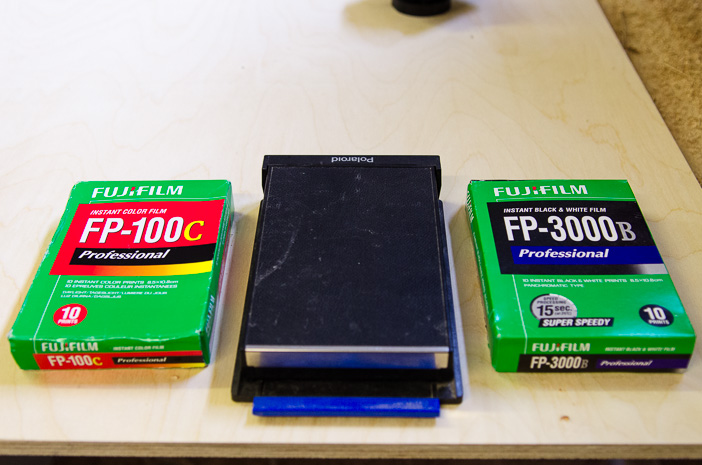 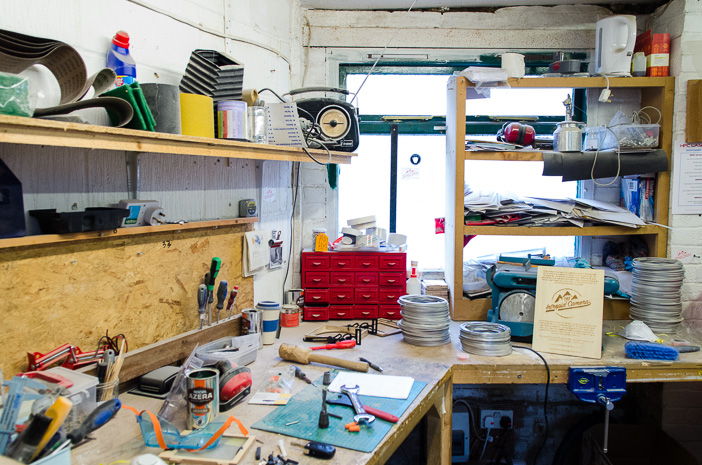 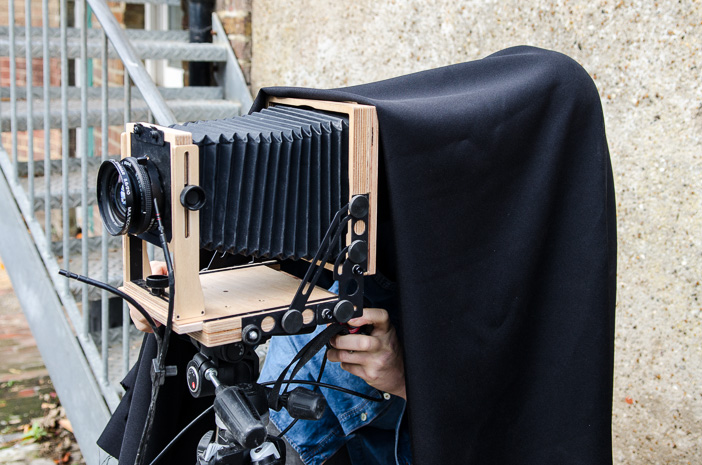 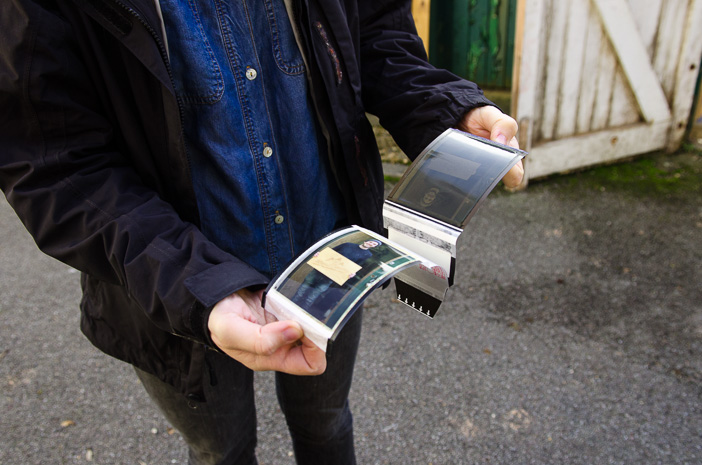 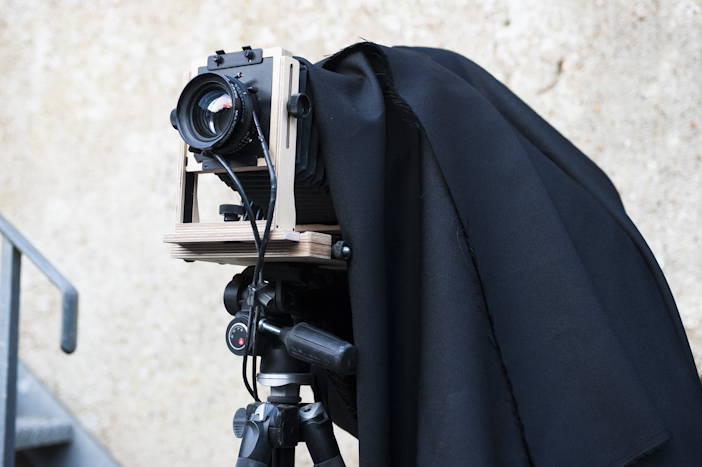 Just over a year ago there was an interesting revolution in 5×4 camera technology and it happened right here in Brighton. Founded by Max and Eddie, two product design students from the University of Sussex, The Intrepid Camera was born out of a dream to make large format cameras cheaper and more accessible.

We know Brighton’s not short of a snapper or two, so a couple of SOURCE photographers fought for the chance of a hands-on demonstration with the basic, but super-cool looking camera.

We met Max alone in a chilly little workshop at the end of a small mews in Hove that was, to say the least, quite minimal, just like the camera itself. The small room was also decorated with a light covering of sawdust. On entering we were warned that a cup of tea was out of the question because the kettle had broken, so we got straight down to business. Max told us about his passion for picture making, and how, for him, the magic was all in the capture of the image. Being so used to digital cameras and the luxury of reaching no further than our pocket to take a picture, hearing him talk about this stuff was refreshing.

Max told us how he had longed to shoot with large format cameras but had always found them too expensive and too cumbersome to carry around. Whilst many of us might address this problem by making do with the latest iPhone app, Max sought a different solution. By referring to old and abandoned 5×4 cameras, available second hand, he began meticulously building his own, new, lightweight and affordable alternative.

Clearly proud of his design, as any product design graduate would be, he was only too pleased to show us how it worked. He explained how his design was a modern re-think of the traditional, but lacked none of the professional capabilities. After some trial and error during the design stage, the camera is now fully compatible with all standard film holders and can take a variety of lenses.

It’s a ‘bring your own lens’ camera but we’re informed lenses can be found easily second hand, and if you want to get going straight away with a ready-to-shoot product, you can always start with the Intrepid Camera’s pinhole lens. We watched as he handled his original prototype with love, tilting and shifting it into position. He also demonstrated how the thing is entirely collapsible and can be chucked into a rucksack. He told us: “There’s nothing quite like getting out in the field, relaxing and taking your time to create that perfect image”.

With each camera lovingly handmade out of FSC-approved plywood – with easy-to-use fixings and bellows made from nylon sail material available in a variety of colours – he showed us a huge pile of the individual components stacked up ready for composition. Max is currently working through a backlog of orders, with only minimal staff to help him. He’s fulfilling the orders from an initial Kickstarter campaign from which he says he’s ‘humbled’ to have received £63,000 of the £27,000 he asked for. This momentous act of support and generosity is what turned The Intrepid Camera Company into a reality.

The campaign is testament to the camera’s appeal. It must be reassuring for Max and Eddie to know that their hard work has paid off, and that other people are longing for this new and sleek design. Why wouldn’t it be popular though? It will only set you back £195 (as opposed to around £1000 for a second hand original) and at only 1.2kg it’s a fraction of the weight and far less clunky than the traditional 5×4 camera it descended from. However, it’s a surprise to learn that with so many photographers in Brighton, The Intrepid Camera’s biggest client base is in the US. 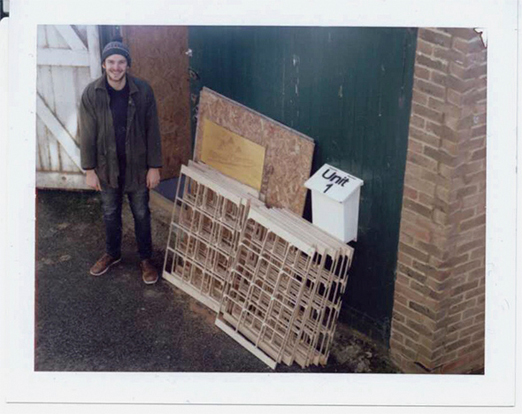 We felt it was time to find out why it’s been flying off the dusty shelves, and after a short intro we were ready to play. We found the camera remarkably intuitive to use; for such a technical design it exudes simplicity. It was a joy to handle, and where we were cautious we were informed it was practically indestructible. We shot to Polaroid, and as always when shooting to film we took that extra time to set up the shots. We composed, focused and metered for our exposure (ironically with an iPhone app) pulled out the darkslide and then clicked the shutter.

While we were waiting for the Polaroid to develop, Max continued talking, clearly enthused. He said that when you buy one of their cameras you become part of a community. He said he’d welcome anyone to get in touch, or to come and visit. And if you need it, support is always available. Really, we just think he wants you to love the camera as much as he does.

We asked if any customers had kept in touch and we heard about two people who had done just that. The first is an Arctic explorer and artist, Kathy Akey, who uses the Intrepid Camera to capture beautiful landscapes, the kind we could only dream of. The other is Mark Scholey, a photographer who demonstrated that he could use it to create images via a wet plate process. No mean feats, either of them. Max again, this time snapped with the Intrepid Camera by Francesca Moore

Finally our pictures were ready. Revealing the image reminds us how much we love film. No matter how advanced digital technologies become there will always be something a little bit more special and rewarding about shooting analogue. It’s addictive too, as we found out.

If your reaction is anything like ours, we know you’ll be dying to see it. You can see the final product, and how it was made, in these three videos:
The Intrepid 5×4 camera
Bellows construction
Making lens board holders

Francesca Moore’s passion for the performing arts has seen her photographing live stage events for the past ten years; shooting at intimate venues and major stage events for a range of editorial clients, and with the production of limited edition fine art prints. Her personal work stems from interests in people and the environment, where she draws on her scientific background to portray humanitarian, social and environmental issues. She began contributing to the SOURCE after a permanent move from London around the time the magazine was dropped for an online only presence. She’s assured there’s no correlation.
← PREVIOUS POST
Mercury Rev Photo Review
NEXT POST →
Kurt Vile & The Violators Review
Mailing List
Recent Posts
Website developed in Brighton by Infobo
Copyright © Brighton Source 2009-2021
The Intrepid Camera Company - Brighton Source