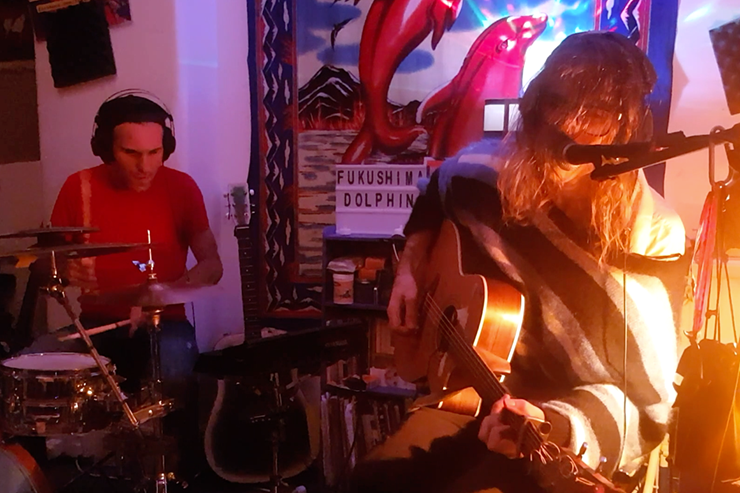 The Rise of Virtual Gigs

In the absence of social gatherings people have very quickly got in the habit of watching musicians perform live online. You could probably attend a virtual gig every hour of every evening right now. But are they merely a stopgap or a new way of performing? Will these attempts to replicate live shows come to be seen as a curious passing fad or a rival to the ‘real’ thing? As with everything else at the moment, we have no way of knowing. So we decided to ask the musicians. SOURCE spoke to Brighton bands Night House, Fukushima Dolphin and Pog to find out what it’s like to play a gig in an empty living room. How has the lockdown affected your music?
We had a big old album launch planned for the end of March at St Nicholas’ Church and we were getting additional strings players in for it. It had a really great line-up with Ellie Ford and Bea Everett in support. And then of course everything stopped, including the gig. Alas, it was not to be. But everyone’s in this, so you can’t feel too sad about it. Move on.

What made you decide to do a virtual gig instead?
The first one I did was on the eve of the launch for ‘Everyone Is Watching From Afar’ (recently reviewed by SOURCE). I felt we had spent so long working up to releasing this album it would have been strange to not do anything. And I really enjoyed it. It’s a very different thing, but it’s quite fun reading comments and seeing people getting involved. It definitely feels different to a pre-recorded video, even if you’re doing it on your phone with the same set-up. There’s that extra element of panic!

How does it compare to a real gig?
It’s just good to be able to continue performing. We’d just come off the road after touring Germany a couple of weeks before. We had loads of shows lined up, and then to realise we weren’t doing anything… felt a bit strange. I’ve been loving the livestreams because it feels like you’re exercising that performance muscle.

How many have you done now?
I did one for the album launch and one for the blog Indie Band Guru, and another for the Oasis Project, raising money for vulnerable women in Sussex. And I’ll be doing one for Sofar Sounds Brighton in a couple of weeks on May 1st. I would like to continue doing them as much as possible, but I wonder about people tuning in. Just like playing live on the local scene, you don’t want to overdo it.

Has the lockdown inspired you in other ways?
It’s a strange time. Whereas a lot of people have suddenly found themselves with loads of free time, I had a busy time planned with the album launch doing PR stuff in email boring land. I’m self-employed anyway and work from home. The only thing was suddenly less money! But I’ve definitely been pushed into doing stuff that I probably wouldn’t have done. And I think that’s a good thing. I’m doing more exercise than I’ve ever done in my life. I didn’t expect that!

Do you think you’ll carry on doing virtual gigs?
I’m definitely going to continue doing more live video stuff in general. Every four or five days I’ve been doing a track from the album as a pre-filmed video on Instagram. And that’s been really great. Some people have this adage of “more content, more content, more content!” but I’ve always preferred to make sure things are perfect. But actually they’re right. I’ve always seen music as more about getting out and playing live and doing loads of touring. But if you can stay in your living room and reach more people… haha, perhaps that’s the future!

Watch the next Night House gig on Facebook here. 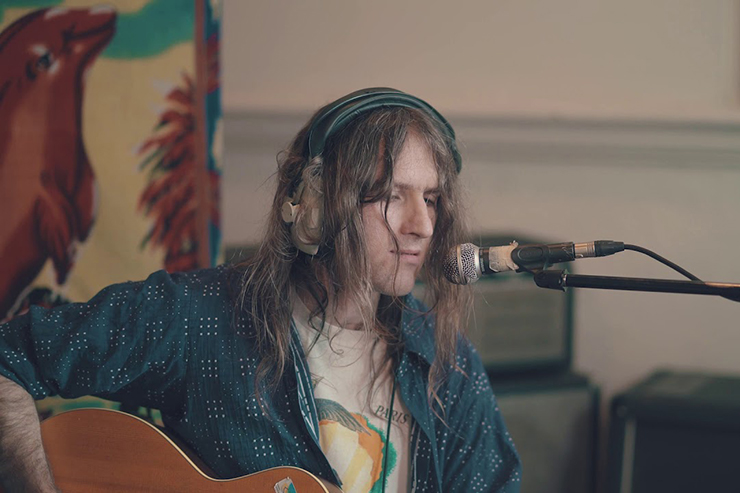 How has the virtual gigging been going?
Well, we made three pre-recorded videos over the last few weeks and we did our first livestream the other day. It was just an experiment really. We got a decent amount of people and that was without any promotion. We’re doing another on Saturday (April 18th), which we’re going promote a bit more! I think we might do two hours, maybe three if we get into it. Haha, depends how many people turn up. I guess if there’s no one there we’ll probably stop…

Is it any different to recording a regular video?
It’s nice to get the energy of playing live, even if there’s no one there. You play differently and it does feel different, even though you’re just on your own. Obviously you know you can’t go back and edit it, so it’s going to be what it is. It’s a little bit more like a gig, you have to commit to it because you can’t do another take. So you think fuck it, I’m just going to play it.

How has the lockdown affected you as musicians?
Well, we can’t do gigs so we’re not really making any money. Before we were busking a lot and doing quite a few gigs, and obviously we’ve lost out on all that. It’s annoying, because it’s just as the weather’s got better! We had a show at a club in Albania too that we had to cancel, which would have been fun. And we were putting on a show at the Green Door Store which was going to be a big one – with lights and dancing animals and stuff. We’ve had to move it back until 11th September. Of course, we might have to cancel again… depending on what society is like!

How do you see things panning out?
You just don’t know, do you? Obviously it’s a big deal for the world, politically. But it seems fairly likely that you might be able to do shows again in September. It’s hard to tell. Some people are saying that even after the lockdown people are still going to be cautious about gatherings. I think there’ll still be quite a lot of young people who will be like, yeah let’s go to gigs! I imagine it will take a while to go back to complete normal. But it’s obviously not going to be a great year for musicians, is it?

Have you been encouraged to try anything new during the lockdown?
We wouldn’t have made those videos otherwise. It’s quite nice to have done that, I’m quite pleased with them. I’ve been practising a bit more and I’ve been mixing a few things that I needed to finish. So in many ways it’s been quite good in terms of forcing me to do stuff. It’s also nice to know we can do it ourselves now in my… well, it’s not exactly my living room, it’s just the room I live in. Next to the dolphin, next to the drumkit, that’s where I sleep!

Watch the next Fukushima Dolphin gig on Facebook here. 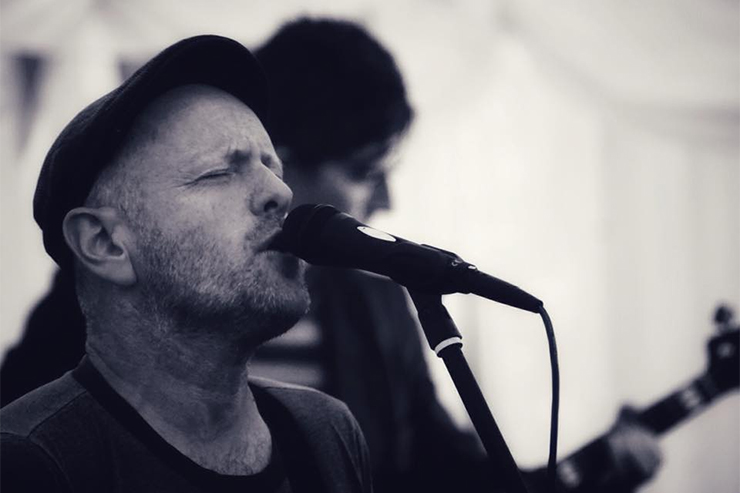 How has the lockdown affected you as a musician?
It’s put a stop to any gigging, of course. The idea to do virtual gigs came about as necessity to start with. We had lost quite a bit of money on cancelled shows so had to try and recoup a bit. We’ve done three livestreamed gigs so far, and we’ve got another two this weekend. They’ve gone down really well!

Is there much sense of audience involvement?
I think the general sense of isolation at the moment has meant that people get a lot out of them, and it’s certainly been a tonic for us too. The feeling of playing to your reflection in a phone screen takes a bit of getting used to, but the merits are starting to present themselves. You can play a show on your sofa in your slippers to several hundred people after walking down the stairs. That feels eminently more sensible than driving 200 miles to play to six people and the soundman.

When are you next donning the slippers?
We’re doing a kind of mini virtual festival on Saturday (April 18th) called Inside the Birdbath – with the likes of Philip Jeays, Wob, Blyth Power and others. It’s a continuation of an event which started in 2006 when we were lucky enough to live in a little house with a big garden and very supportive neighbours on both sides. We started having solo performers and acoustic bands play an all-dayer once or twice a year, usually as a benefit show. It’s faltered the last few years as the last three have all been rained off. That’s another boon to playing virtually, it can do what it likes outside and it won’t matter.

How do think the pandemic will affect Brighton’s music scene in the long term?
I imagine a lot of venues won’t be able to weather this, plenty have been struggling anyway. I also think people will feel edgy about being in close proximity to too many other people, so from that point of view it’ll take a while to feel safe and secure in social situations.

Do you think you might continue doing virtual gigs even after the restrictions are lifted?
I think so! It’s something that hasn’t really been tapped into like this before, but there’s so much scope. And for a lot of people with mobility or other physical or mental health issues, going out to a live event can be difficult or impossible so it feels like an inclusive way to share music.

Have you found yourself doing anything lately that you’d never thought of doing a month ago?
We started our Quarantine Tapes group on Facebook after this started, which aims to get different musicians recording collectively, that’s something that hadn’t occurred to me before. I’m trying to get into the countryside as much as our dear leaders will allow – I feel like I’ve really subscribed to Spring this year. Other than that the focus is on working on the new batch of Pog songs, and running more events like the Birdbath. We’d only be twiddling our thumbs otherwise.

Photo of Pog by Roy Vickers

Ben Bailey is the editor of Brighton Source and a freelance writer. He also plays in a few bands and can sometimes be found giving talks on a variety of niche topics. He lives in Brighton and rather likes it.
← PREVIOUS POST
Zoom In - A Remote Portrait Series
NEXT POST →
Locally Sourced, April 2020