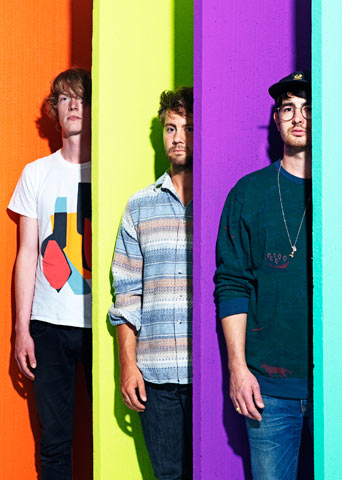 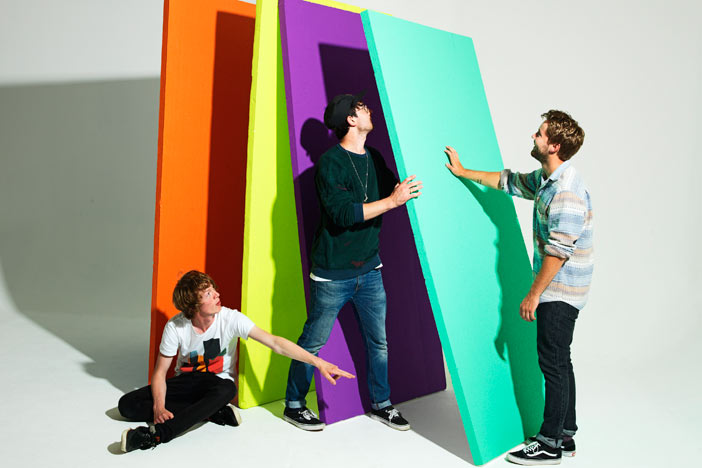 Something rather exciting has happened to punk bands in the last year – they’ve found the groove. Songs are getting longer and bassists and drummers are locking in while guitarists go nuts on top. When Parquet Courts played Audio last winter the barriers were torn down, quite literally as singer Andrew Savage kicked over the crowd barricade during an 11-minute version of their Can-meets-Pavement masterpiece ‘Stoned And Starving’. Closer to home Traams have been slaying audiences since we first saw them dominate the Best Of Brighton-fest that is Sea Monsters.

What makes the band so special is that they take a garagey style of punk and inject it with both pop and krautrock. At its best it’s incredibly powerful, as on their debut album’s closing track, ‘Klaus’. Kicking off with a riff like Weezer’s ‘Hash Pipe’, disorientating vocals give way to Stu’s jabbing guitars and a rhythm section that’s happy to sit on the same throbbing groove for seven minutes and make you never want it
to stop.

Onstage it’s a powerhouse of a tune, allowing Stu to punch melodies out of his guitar while the crowd stay entranced by Leigh’s rolling bassline and Adam’s Neu!-like drums. If there’s a better live track played in Brighton this year we’ve yet to hear it.

“I think we always wanted our sound to feel like it was constantly moving,” explains Stu. “It was always about pushing it forwards.”

“I remember in the early days Stu saying he wanted to make it really pulsey, like dance music,” Adam says.

“Fuck Buttons do it really well,” reckons Stu. “Techno does it well – James Holden, Richie Hawtin. To do that with guitar music, to have that release, is fun. You can do it in a club with a dance record, so it’s good to try and do it live.”

“It’s not always intentional,” continues Adam. “When we’re, for want of a better word, jamming, and something happens it’s like, ‘Let’s keep doing that for a minute.’”

Sometimes it’s more than just a minute. ‘Head Roll’ goes from a two-minute bubblegum pop song into a four and a half-minute improvised bassline. Four and a half minutes. And you know what, you’re never hoping the New Order-ish bass solo would, you know, hurry it along a bit.

“Sometimes it feels a bit selfish in a way,” smiles Leigh. “We enjoyed that bit so we decided to play it for longer. It wasn’t even my idea. You’ve just got to learn to be subtle with it. Changing where you play it slightly, or adding a hi-hat that people don’t really notice.”

“These two are really good at doing the rhythm thing,” says Stu of his bassist and drummer. “I’m really crap at noticing when drums change. These two can nerd it out. ‘Oh, you did the extra kick on that bit!’”

“That’s why we always wanted to be a rhythm section,” explains Leigh. “We had that mutual understanding of what we both wanted from being in the background.”

Hardly in the background, Adam and Leigh are what audiences are feeling through the speakers when they’re packed into venues like Sticky Mike’s or The Albert. But it frees Stu up to be looser with his squealing guitars and vocal screeches. It’s easy to see how that connection works live, but how have they transferred it so successfully to their debut LP on Brighton’s FatCat, ‘Grin’? By doing exactly what they do on stage in the studio, apparently.

The trio plug in and play live, from which Leigh and Adam’s tracks are taken, normally from the first few takes. After that Stu simply adds his guitars and vocals on top – it’s a world apart from bands that piece things together in Pro Tools.

“Because they were written like that we wanted to be able to record it like that,” says Leigh.

“With ‘Klaus’ I just added a guitar,” Stu recalls, “but because we did it at Palette [with producer du jour Rory Attwell] all playing together, we couldn’t separate the instruments. It’s a live recording, with added vocals. A few of them on the original session are like that.”

“Never say never, but I’m pretty sure that’s the way we’re going to keep it,” says Leigh. “For me that’s the most fun.”

“It’s the most natural,” says Adam. “After this interview I know exactly what we’re going to do – get in a room and play at each other for a few hours. It’s really cool to do that in a studio, because that’s what we do. We’ve been doing it for two years, so it comes across better.”

It seems to be working for them as not only did Traams release a five track EP, ‘Ladders’, before their 11 track album, they’ve already got another album written and ready to record as soon as FatCat lets them.

“It’s better to capture that time period and move on,” confirms Leigh. “You can just write another song.”

“Don’t get worried because it’s a good chorus and you don’t want to waste it,” continues Stu. “As soon as you sit on something for too long you get bored and write something else. Playing new stuff is always loads of fun, and recording it as well. Get it out, get it done, move on to the next one.”

Before they move onto those next songs they’re playing a gig at an unlikely venue. Sure, Resident have plenty of in-stores but Traams are a pretty intense band and they’re promising the full onslaught.

“To be honest I’m so stoked about playing Resident,” smiles Stu. “It’s such a good record shop. Obviously being such music nerds we love it there. We’re not doing it toned down – we’re being noisy. Really noisy.”

We’d expect nothing less from the uncompromising Traams.

James Kendall was the co-owner and editor of SOURCE. He’s been a music journalist since 1992 and spent over a decade travelling the globe covering dance music for DJmag. He’s interviewed a range of subjects from Bat For Lashes, Foals and James ‘LCD Soundsystem’ Murphy to Katie Price and the Sugababes. He’s a keen photographer and has work featured in The Guardian.
← PREVIOUS POST
Halloween 2013
NEXT POST →
SOURCE Virgins: A Night At The Opera
Mailing List
Recent Posts
Website developed in Brighton by Infobo
Copyright © Brighton Source 2009-2019
Traams Interview - Brighton Source