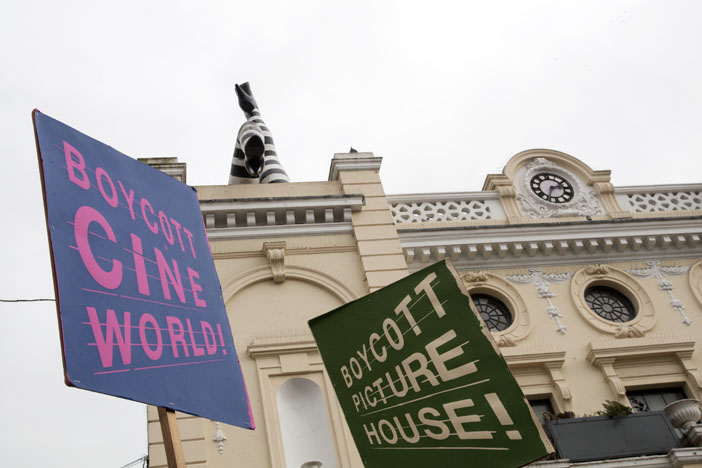 Staff at the Duke of York’s went on strike on Saturday over wages, union recognition and infrastructure issues. The Duke of York’s is the fifth cinema in the Picturehouse chain to see strikes in recent months, and the first outside London.

Around fifty people joined the picket line from midday, holding movie-themed placards and banners urging the public to boycott the cinema. The frequent hooting of horns seemed to suggest that many motorists gave their support.

The front of house cinema staff, who voted unanimously to take action, are demanding a living wage as well as seeking recognition for BECTU, the broadcasting and entertainment union. In addition, the strike was spurred by ongoing technical problems which regular visitors might well be familiar with.

A spokesperson who has worked at the cinema for two years told us: “The system they implemented in our cinema doesn’t work to the standard that it needs to. We’ve had a number of technological issues in the past two years, especially in the past nine months. We are unable to process card payments, we have double bookings, our tills don’t work, people can’t buy memberships and the website doesn’t work. It’s led to absolutely dire services.” 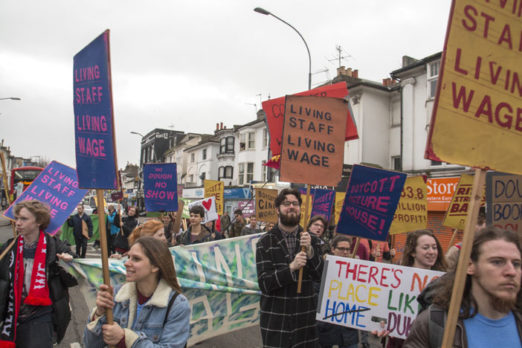 “We’re on strike here to get Picturehouse to recognise our chosen union, which is BECTU. Their own company union, The Picturehouse Staff Forum, isn’t independent. We feel it doesn’t represent us. They haven’t helped us with any of the issues that we’ve had. We’ve told them that this has reached breaking point for us because we can’t serve customers. It’s losing them money in the end because we can’t sell tickets. They have not done anything. I don’t see how we can continue our jobs when the tills don’t work.”

Though this stuff is surely annoying for both staff and customers, it doesn’t make for great placards. However, the main focus of the strike was to secure a living wage, which in Brighton is set at £8.45 an hour.

“We want to fight for union recognition to help negotiate workplace issues and secure the living wage. There are over 300 small businesses in the city that pay the living wage to their workers. We’re part of a huge, huge company that earned £83m profit last year, and our CEO took in over £1m himself. We don’t see how they can defend not paying their staff a living wage, given those figures.” 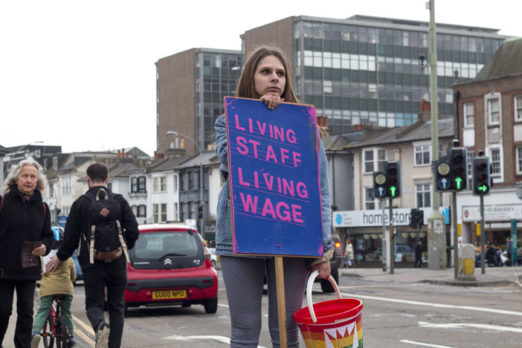 Duke of York’s Picture House was built in 1910 and has a good claim to be the longest-running cinema in the country, if not the oldest. It was purchased and restored by Picturehouse Cinemas in 1994, an arthouse chain that was in turn acquired by Cineworld in 2012.

“It has historical relevance for the whole community,” says the staff spokesperson. “A number of us grew up here in Brighton, and we know how much the building means to everyone locally. That’s why I wanted to work here and why I love working here. A lot of people in Brighton don’t know that Duke of York’s was bought by Cineworld a couple of years ago. We’re not an independent cinema, but we still uphold many independent values because we really care about this building.”

In 2014 another Picturehouse cinema, The Ritzy in Brixton, saw strikes over the living wage, and it was at the same place that the latest wave of action started. Other Picturehouse cinemas in Shaftesbury Avenue, Hackney and Crouch End have subsequently joined the campaign. On Saturday, several members of staff from London were in Brighton to show their support. Later in the afternoon the gathered crowd marched to Picturehouse’s other Brighton cinema, Dukes at Komedia.

“We’re part of the same company as the London sites, and that’s why we think it’s more of a collective fight, a collective campaign.” 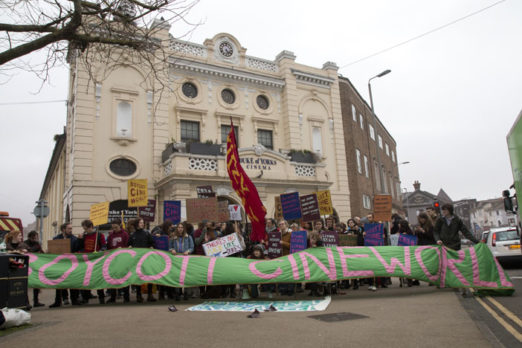 Ben Bailey is the editor of Brighton Source and a freelance writer. He also plays in a few bands and can sometimes be found giving talks on a variety of niche topics. He lives in Brighton and rather likes it.
← PREVIOUS POST
Prince: An Anniversary Tribute, Fri 21st April
NEXT POST →
Laetitia Sadier Interview
Mailing List
Recent Posts
Website developed in Brighton by Infobo
Copyright © Brighton Source 2009-2020
Duke of York's Staff go on Strike - Brighton Source