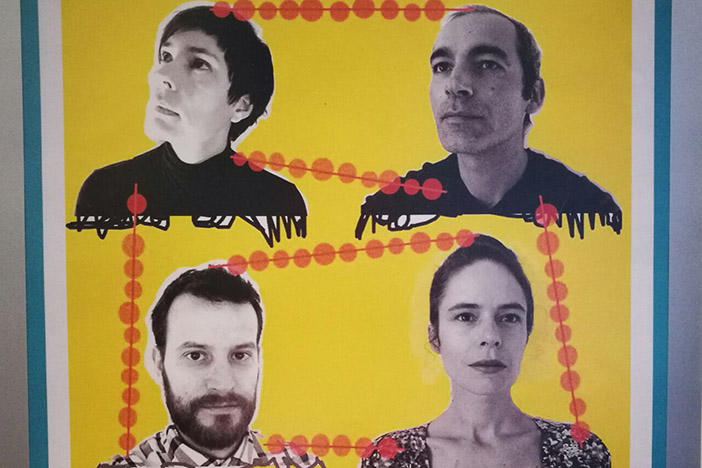 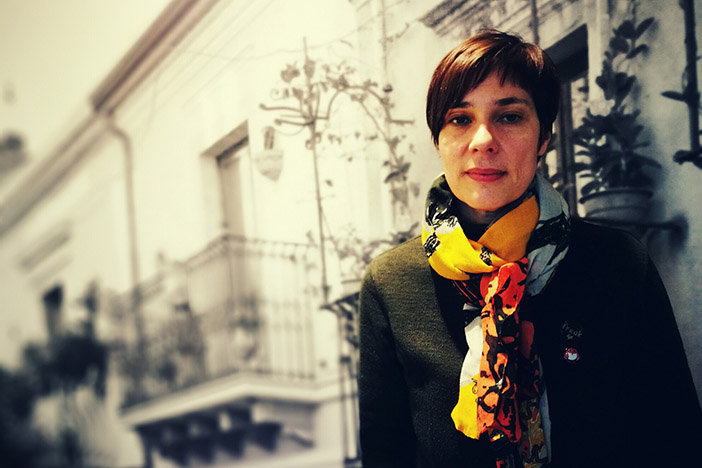 The venue Laetitia Sadier has chosen for our rendezvous surprises us a little. Café Nero in the department store opposite Brixton tube isn’t the retro-futuristic, Kubrick-inspired bubble dome we expected. But then, heroes should be unpredictable, shouldn’t they? And the former Stereolab singer is certainly one of ours.

Our first impression is that she’s a little shy, but very open and engaging — with that slight otherworldliness you often associate with fiercely intelligent, creative souls. We like her a lot.

Her new band, Laetitia Sadier Source Ensemble, is an expansion, both sonically and physically, of her previous solo work, resulting in a return to a more… “Stereolabish” sound. They release their debut album, ‘Finding Me Finding You’, on 24th March.

“There are four of us now, which I’m very happy about. It feels very natural,” she tells us. “It’s me, Emman, Xavi and [the newest member] Nina.”

But why the need for the expansion?

“I did a series of shows with Batsch. We were a five piece, and I realised that having keyboards took the music to another dimension. That opened up the idea of taking on another member,” she explains.

We tell her that the opening track on the album, ‘Undying Love For Humanity’, reminds us of late 90s, ‘Cobra and Phases Group…’ era Stereolab. And before we know it, we’re in at the deep end — chatting about free will and Einsteinian relativity.

“I wrote [‘Undying Love For Humanity’] in Brazil, where I formed a group called Modern Cosmology. We did four tracks, which will be out in April.”

But why Modern Cosmology? “I came across the name while watching a programme about Einstein. It’s good to be exposed to ideas that are counter intuitive and to realise how we’re shaped and conditioned by systems that are locked. Einstein was about smashing those boundaries and opening up a new set of possibilities. He worked with intuition and creativity, rather than with a set of preset rules, like all the best artists. And he worked with a notion of love. He talked a lot about the power of love and the power of spirit.”

“I like the idea that we can project ourselves into the cosmos, that nothing is predetermined and we can shape our destiny. I wrote a little text about this recently for a French magazine, because I wanted to talk about free will. And if anything, I came to the conclusion that it’s our circumstances that will determine whether we react in a certain situation. Some people will be resigned, others will resist. Either way, it depends on the person’s courage or strength. Some people can take a lot of pressure before they say ‘no, I won’t have this anymore’. Either way, it doesn’t matter whether there’s free will. The important thing is that we react collectively.” 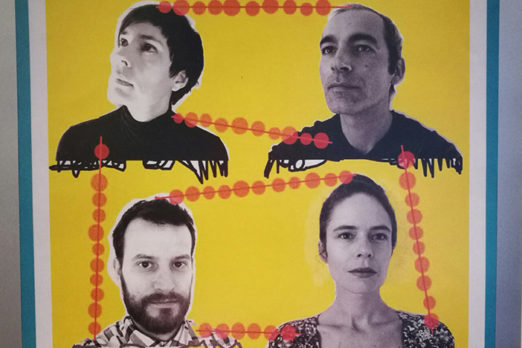 Laetitia’s lyrics have always had a philosophical/existential edge, but it’s not always easy to tell where she’s coming from. We ask her if this latest album is overtly political.

“It’s nice to have interviews, to put things in context around why I say certain things,” she replies. “But of course in a song it’s more poetic, although sometimes it’s very overtly political. And there are some very overtly political songs on this new album and I hope I’m being ever so clear; but even in this clarity there is always a question. And I cannot say ‘here guys, here’s the solution.’ The solution lies in every one of us.”

“We have to make our own processes to get to our own conclusions, and in the sociopolitical context we have today, my goal is to make people realise that politics is our best tool to organise society to our own ends. And I mean the people’s ends, not the financial institutions. We’re in this deep trouble today because we have neglected the political dimension.

“Politics concerns us all. The political specialists are totally disconnected from reality, so how can they handle our reality? There are probably some great people who are in it for the right reasons but a lot of them are really suspicious.”

Do things need to get a lot worse before they can get better?

“I think they’re already pretty bad, but indeed we’re going deeper and deeper into shit. I’ve been awakened to this for years, and people would laugh at me or ignore me. Rare were the ones who would adhere to my political stance, but there are more people now. Brexit, Trump… we have to do something, because these guys are only going to put us more into crap. So I think we’re gonna have to go deeper into shit for more people to awaken. There’s a lot of despair and resignation, but there’s more anger as well.”

“I see politics everywhere,” she continues. “In every decision we make every day there’s a political dimension. We are individuals who are part of a society, of a world and of a cosmos, and we can’t detach ourselves from any of these dimensions… and if we do, there’s trouble.”

“We are in a severe corner of history and we have to take a turn. Now is a good time to relinquish the ego and serve a bigger good. Forming a collective force that’s not just about ‘me’, it’s about ‘us’. But it’s also ‘me’ within ‘us’. I don’t want to eliminate all forms of singularity [individuality], which is a very fascist idea. We want difference, we want everybody to be their unique selves, but to be part of a whole. And the album talks about that. Power to the people!

Bringing it back to music, she tells us who she’s been inspired by recently.

“We’ve been listening to quite a bit of Lucio Battisti. And a lot of music that friends have been making. Over the last couple of years, everyone has been so inspired. Maybe it’s the age group… we’ve been peaking and maturing. I’ve been hearing some awesome stuff, like Julien Gasc’s album ‘Kiss Me You Fool’. The new Aquaserge… if you like Stereolab, you can totally put your teeth into that album. It’s an odyssey from start to finish, you delve deeper and deeper into some cool music. They’ve been doing music for 20 years and they’re very excellent. I’ve seen some of their shows and thought ‘my mind is being seriously expanded right now’.

So what does she think of Brighton?

“We had some band members who lived in Brighton, and some still do. Dominic, our keyboard player in Stereolab, also Joe, who played keyboards too and also worked on my album. And Simon Johns, who used to play bass in Stereolab.”

“I’ve played Brighton quite a few times. One day we played in some bar, a round circular place. I heard it was gonna close down [we reckon she means the Hanbury Ballrooms]. There were ten people in there but it was such a beautiful place. Komedia is ok, but it’s not very romantic. With the Lab we played the Zap once, with Gallon Drunk. That was cool.”

“I do love Brighton, always been very charmed by it. There’s lots going on, it’s a stop for most bands now.”

She asks us when the Brighton gig is and we remind her that it’s in April. “By then we will be like a well oiled machine,” she says.

“I’m off to buy a kettle. Mine exploded,” are her parting words as she floats off in the direction of the electricals department. That explains the choice of venue then.

A magazine journalist and former BBC minion, Gaz's words can be found in publications ranging from The Radio Times Guide To Films to 1001 Songs You Must Hear Before You Die, as well as on his blog The Wine Ninjas . He plays drums in a psych band, and once fell into a frozen lake in Transylvania.
← PREVIOUS POST
Duke of York's Staff go on Strike
NEXT POST →
Laish Review