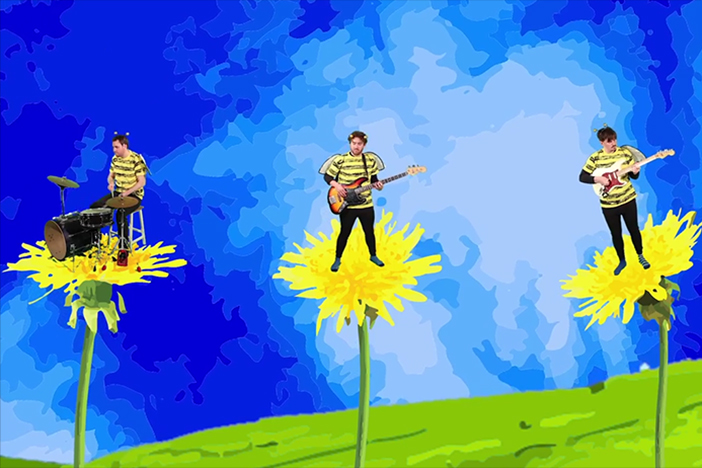 Octopuses Launch New Single To Save The Bees

There can’t be many places in the UK where getting an endorsement from your local MP is a badge of honour for bands. It’s different in Brighton, of course, as proved by the proud boast accompanying Octopuses’ latest single launch.

‘Not The Bees’, a cheeky ditty about everyone’s favourite endangered pollinator, has garnered support from Caroline Lucas alongside environmentalist groups like The Soil Association and Sussex Wildlife Trust. BBC’s Chris Packham has also given a thumbs-up to the tune.

The video for the single was released today on Lick Music and sees the Brighton band, led by singers Adam and Tom, larking about in striped t-shirts in front of some amusingly garish backdrops. Despite being about one of the “most depressing things happening”, the song is jaunty, upbeat and funny with it.

“The idea for the song came about when Adam saw a dead bee in his kitchen,” says guitarist Smalan Odgers. “His girlfriend told him that putting honey on it might bring it back to life, so he squeezed a bit of honey on its back. It didn’t work.”

“That inspired the chorus of the song, and Tom’s fear of dystopian and apocalyptic events moulded the verses. We write songs fast when we’re on good form and everything fell together remarkably quickly. Then I made the video to further address the issues raised by Tom’s lyrics, putting it in a more literal form. A lot of people underestimate bees and the severity of danger we’re in. Modern agricultural methods are just not sustainable and we really feel there needs to be more awareness about this.”

As the video spells out, the bee crisis has been caused by single crop farming, deforestation, climate change and the use of pesticides. Even in purely economic terms the loss of bees could be disastrous.

“Declining numbers are a huge threat to UK agriculture,” explains Caroline Lucas. “A report by the University of Reading estimates it could cost as much as £1.8bn a year to replace the free pollination service that bees provide, since farmers would need to collect pollen and distribute it by hand. That’s why we need to do everything possible to persuade policy makers to act.”

Octopuses are launching the single at the Prince Albert on Friday 16th September, with support from Prince Vaseline and JTR. Proceeds from both the night and the single are being donated to the Soil Association’s Ban Neonics campaign and Bees For Development.

Ben Bailey is the editor of Brighton Source and a freelance writer. He also plays in a few bands and can sometimes be found giving talks on a variety of niche topics. He lives in Brighton and rather likes it.
← PREVIOUS POST
World's Biggest Naked Beach Clean
NEXT POST →
The Man Who Shot Bowie
Mailing List
Recent Posts
Website developed in Brighton by Infobo
Copyright © Brighton Source 2009-2021
Octopuses Launch New Single To Save The Bees - Brighton Source