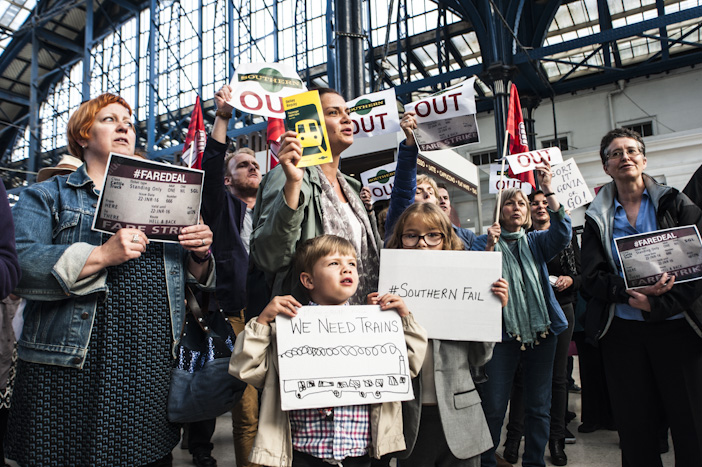 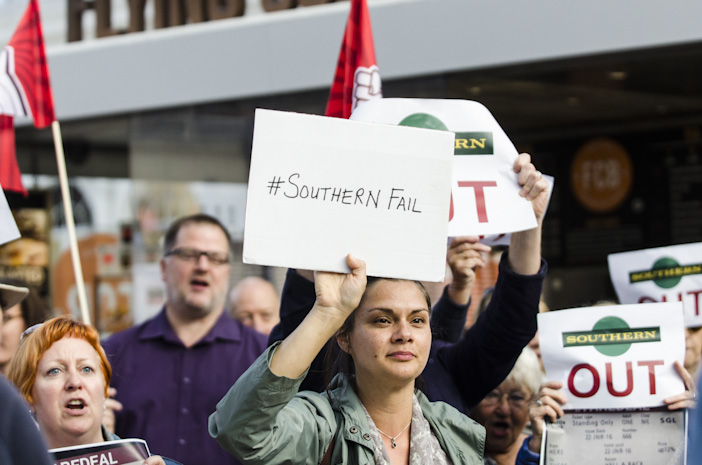 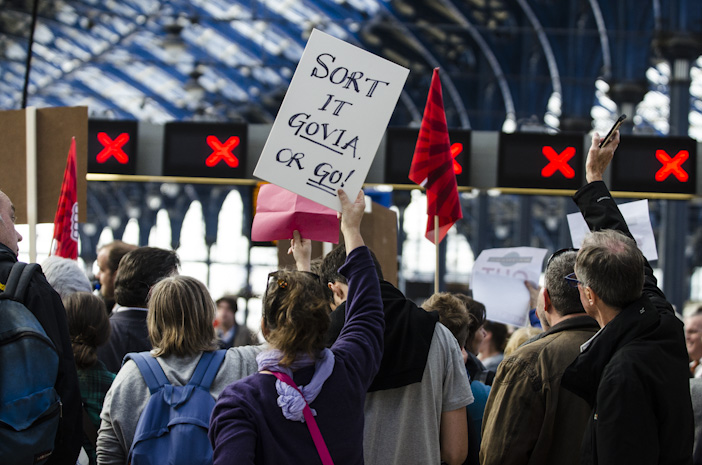 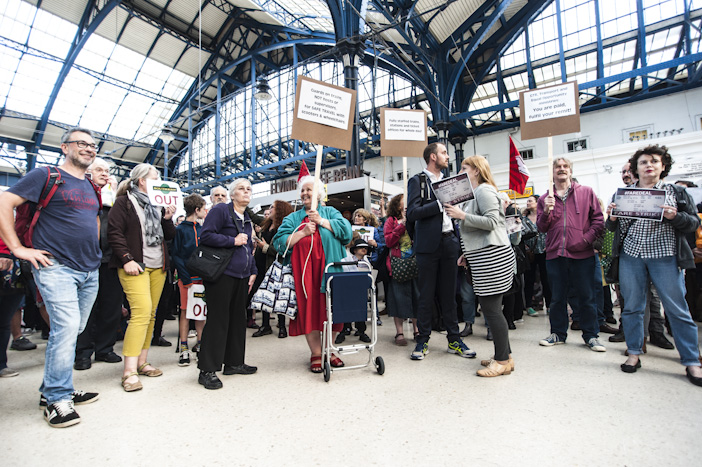 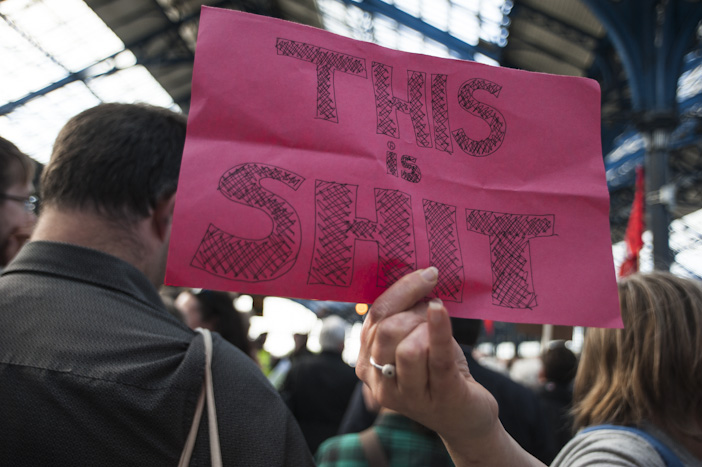 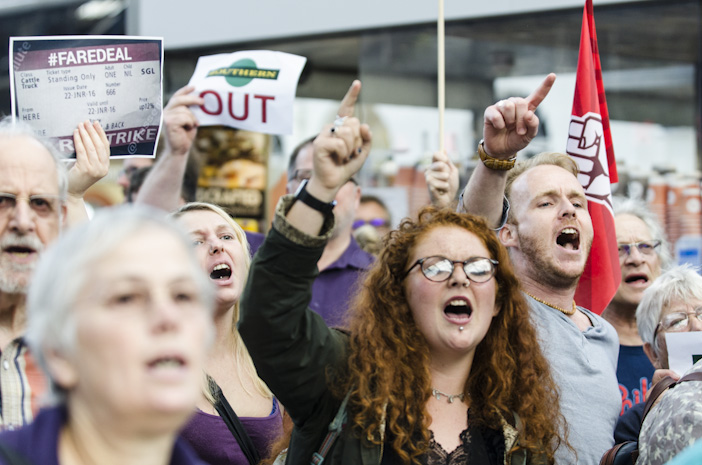 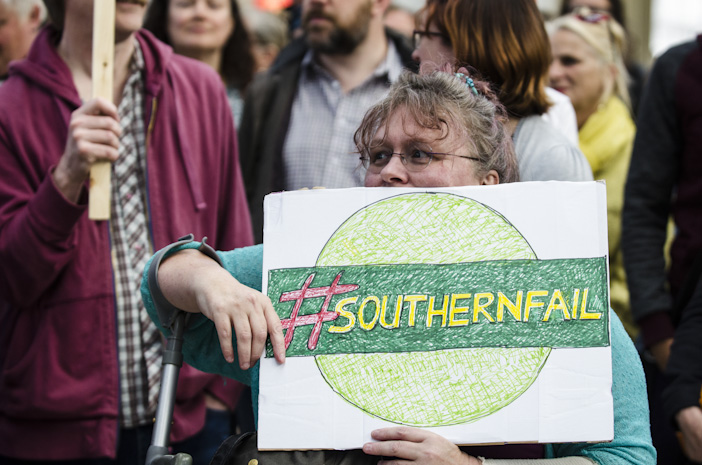 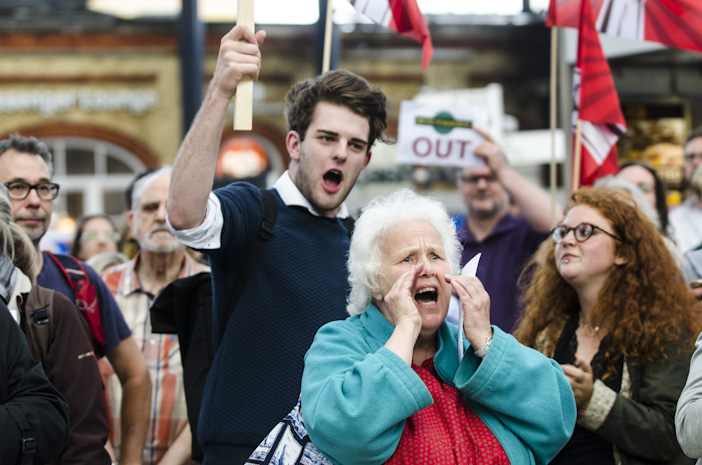 “What do we want? Trains! When do we want them? On time!”

This was one of the spontaneous chants heard in Brighton Station yesterday when a crowd gathered to protest about the chaos on the railways. A hundred or so people assembled on the station concourse at 6.30pm, waving flags and holding hastily constructed signs blaming Southern Rail (and its parent company Govia) for the thousands of delays and cancellations passengers have had to endure in recent weeks.

One look at #southernfail reveals endless horror stories about people being stranded for hours at crowded stations, missing their connections home and being forced to board trains wedged tight with no air conditioning. The fact a woman passed out on an overcrowded train in Hove last week should be a warning. In these conditions, it seems only a matter of time before something awful happens. There was an impressive turnout given the protest was organised in 24 hours with a single tweet. And it was a diverse crowd composed of business commuters, elderly and disabled people and some mums with their kids. Ironically, many others reported that they were unable to attend the protest because of delays.

As further cancellations were announced over the tannoy, one protestor read some stats aloud from his phone. The total number of cancelled trains on the Govia network that day was 300. Apparently this was actually an improvement on the previous day’s total when a staggering 800 trains failed to run. 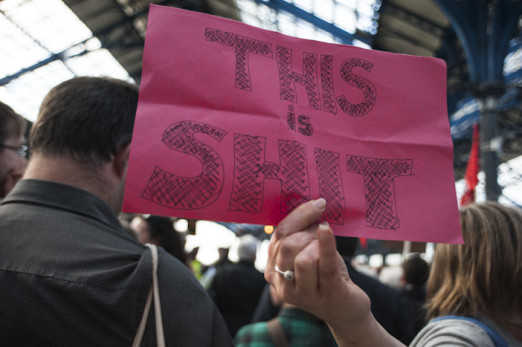 Although Southern trains are rarely punctual at the best of times, the recent spate of cancellations has come in the wake of industrial action by staff trying to block Govia’s decision to remove conductors from trains. Southern published figures suggesting staff were deliberately taking sick days, but the union says the problems have been caused by gross company mismanagement.

While Southern originally blamed the cancellations on ‘staff shortages’ (a phrase they’ve now substituted for ‘train crew availability’), it was suggested, denied, then proved that the company prevented anyone involved in the strike from doing overtime. Because Southern is consistently understaffed anyway, this meant the shortage was excaerbated as a result of an attempt to punish strikers. If anything could make these frustrated commuters even more angry, it’s the thought of drivers turning up to work and being told they’re not allowed on the trains. That, and all the lying.

When station boss, Paul Wyborn, appeared on the concourse he was quizzed by passengers about all this. “We have done certain things, we don’t deny that,” he answered vaguely before darting off. Meanwhile, his colleagues in the office above Marks & Spencer were openly laughing, showing their contempt for the protest while those below were trying to make their voices heard. “They’ve got us over a barrel,” one commuter told us. “It’s embarrassing.”

The privatised model of public transport doesn’t work when passengers have got no alternative. This is one of the many reasons Brighton Pavilion MP Caroline Lucas has been campaigning to bring the railways back into public ownership. After meeting with the Govia bosses last week, she was unable to get any straight answers either. “People are paying through the nose,” she wrote on her website. “It’s putting their jobs at risk, robbing people of time with their families and leaving people at their wits’ end.”

Another strike is planned for Tuesday 21st June. There’ll also be another Brighton Station protest the day before, on Monday 20th, at 6.30pm (see here for details).

Ben Bailey is the editor of Brighton Source and a freelance writer. He also plays in a few bands and can sometimes be found giving talks on a variety of niche topics. He lives in Brighton and rather likes it.
← PREVIOUS POST
Wild Life Festival 2016 Review
NEXT POST →
Brighton's Vigil For Orlando
Mailing List
Recent Posts
Website developed in Brighton by Infobo
Copyright © Brighton Source 2009-2021
Train Chaos Sparks Protests In Brighton Station - Brighton Source