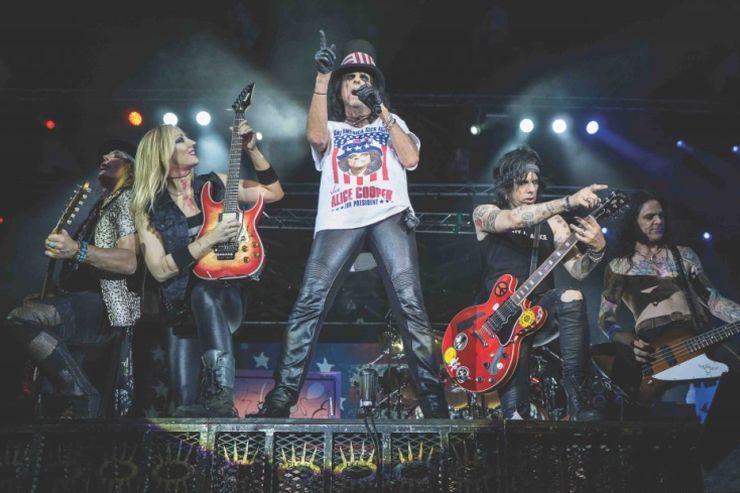 It seems incredible but it is 50 years since the original shock rocker released his debut album ‘Pretties For You’ produced (although to what degree is debatable) by Frank Zappa. Since then he’s been releasing albums and touring the world with his unique Grand Guignol theatrical rock horror shows. He has also appeared in several feature films including Sextette with Mae West and Tony Curtis, John Carpenter’s Prince Of Darkness and his memorable “we’re not worthy” cameo in Wayne’s World. In keeping with his movie star credentials, he also formed The Hollywood Vampires supergroup with Johnny Depp in 2015.

His 1970s glory years produced classic singles such as ‘I’m Eighteen’, ‘Elected’, ‘Billion Dollar Babies’ and, of course, ‘School’s Out’ plus a headline-grabbing reputation for decapitating baby dolls, onstage execution by electric chair and guillotine and the infamous chicken incident. His ballad ‘Only Women Bleed’ has been covered by a wide range of artists including Ike & Tina Turner, Carmen Mcrae, Etta James and Tori Amos.

If that wasn’t enough, the support acts are both headliners in their own right with US Garage king Wayne Kramer’s MC50 kicking out the jams and punk legends The Stranglers hit-heavy back catalogue guaranteed to whet the crowd’s appetite.